If It Ain't Broke, It Ain't Mine

It's been a while since I've posted here, because I really try to keep things kind of "upbeat".  No one wants to hear about my problems, except for my friend Bucky.  He says it makes him feel so much better about HIS life.

The month of November started off amazingly well.  Temps were in the mid to upper 30's for the lows for the first week and a half.  Then things went straight to Hades.  Except it's supposed to be warm there.  We went from 42 degrees (f) at 7am on the 10th, to 2 degrees (f) at 7am on the 11th.  For you English majors, that's 40 degree difference in one day.  And the temperatures went down from there.  Driving back from a meeting in Estes Park, we watched the thermometer go down to -24 degrees.  I walked into the lodge muttering "I'm glad I'm not a brass monkey".  It stayed below zero for DAYS.

During the very unseasonably cold stretch, an outside sewer pipe froze solid, and several water pipes in our "Sunroom" froze and ruptured, spraying water all over inside the walls.  Both of the shut-off valves for the hot water line chose the same night to fail, so I had to shut off the hot water to the entire lodge to stop the spraying water, and then scramble to find fittings to replace the broken joints before guests arrived the following night.  In case you ever need to know, PVC and CPVC fittings and pipes are not the same.  At all.

Each time I would fix one break, the next one would thaw out and spray.

Also during this period, the wind picked up in earnest.  It has been blowing between 20mph and 80mph nonstop for the last two weeks.  We quit riding our horses, and even feeding them turned into a life threatening ordeal.  I finished the plumbing.  At least it was indoors.

All of the extra driving at sub zero temperatures made the "odd-little-grinding-noise" in the front end of the minivan turn into a "horrific-helicopter-crashing-killing-all-on-board" sound.  No way in heel was I going to work on that in the cold.  We took it to the dealer.  They tore it apart, but couldn't get the parts (both front wheel bearing/hub assemblies) until the next day.  We had to borrow my mother-in-law's Pontiac-Buick to drive home in.  I could feel myself shrinking until I could only see between  the steering wheel and the dash.  I left the blinker on.  We got the van back the next day.  Fixed, but not free.  Something about it being a quarter million miles out of warranty or something.  Crooks.

Now, last summer during our busiest, I broke a molar.  I finally got an appointment made to get it looked at during the first part of this month. At that point, they scheduled me for a root canal on the 25th (only one more shopping month til Christmas!).  Joy.  I got that done and got a temporary crown.

I think I enjoyed it more than plumbing.


On the 26th, we made the decision to put our dog to sleep.  She had been fighting seizures for a year, and was losing the battle. It was time.  Sophie the lodge dog, you will be missed.  Damn.  I'm crying again.   I'd rather have another root canal than go through that again.

Yesterday, on Thanksgiving, all the kids showed up with all of their kids and spouses.  We had two turkeys and enough sides that there was barely room for peoples plates on the table.  We even fed the folks in the two rooms we had staying with us that night.  The food was great, the conversations were great and the people were wonderful.  World problems were solved and history was rewritten.  The laughter was loud and continuous.  After the meal was over, the evening continued in much the same vein.  After all was said and done, and the leftovers were divvied up and everyone had driven back to their homes safely, I realized something.

It was a good month after all. 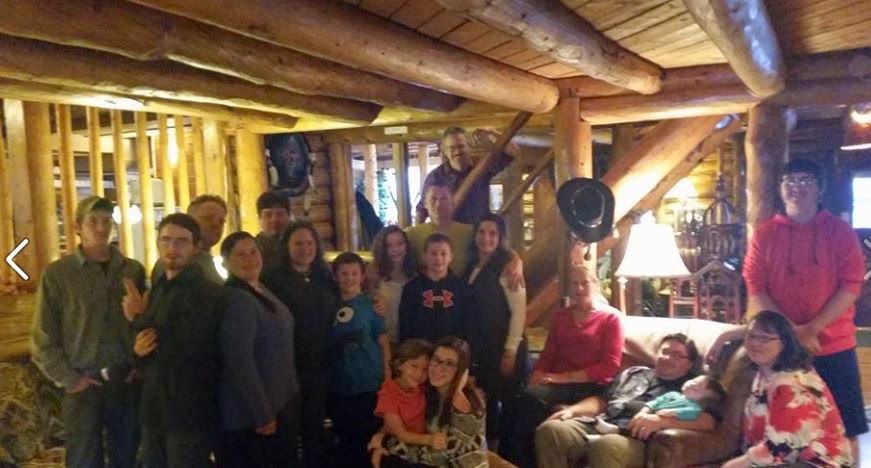 Email ThisBlogThis!Share to TwitterShare to FacebookShare to Pinterest
Labels: lived to tell the tale, plumbing, weather

It's that time of year again - when we turn the horses out to pasture for the winter.  They weren't as fortunate this year to get to stay at our altitude on the many acres of mountain terrain they so love.  However, they are on a nice grassy pasture, keeping a couple fellow buddies company.

We had quite a welcoming committee.... 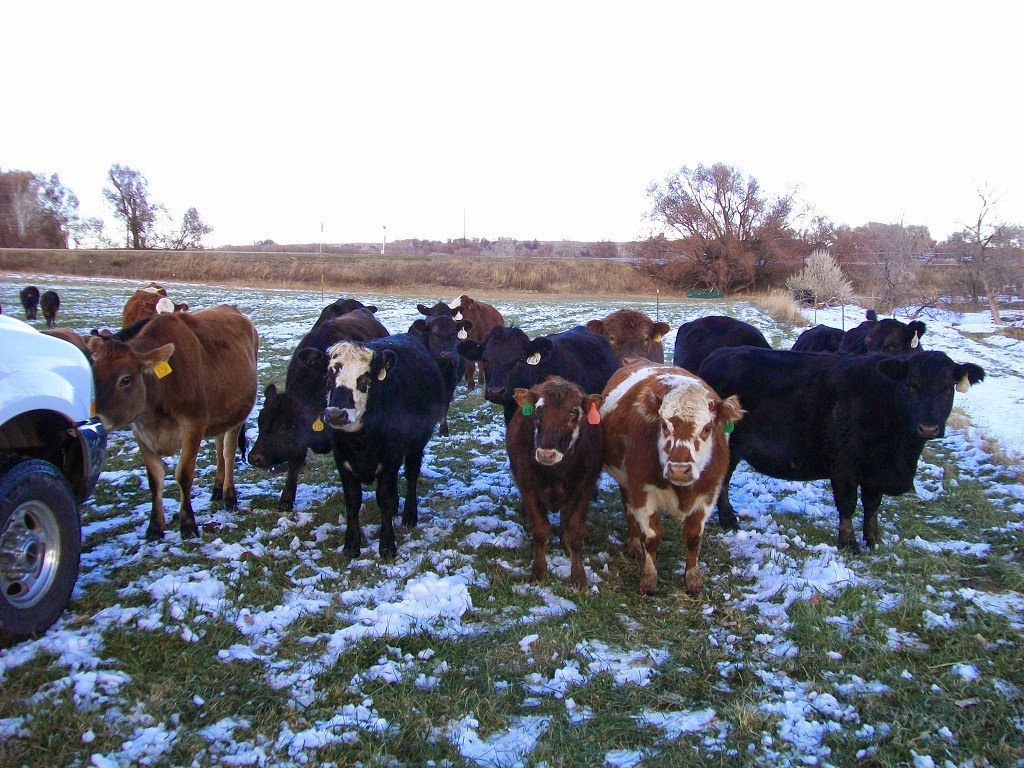 These are Ida's new passion:  we are not allowed to call them miniature cows; they are officially 'low-line' Angus.  They really are not that much smaller than their normal counterparts, but it is easy to confuse them with yearlings, although they are not. 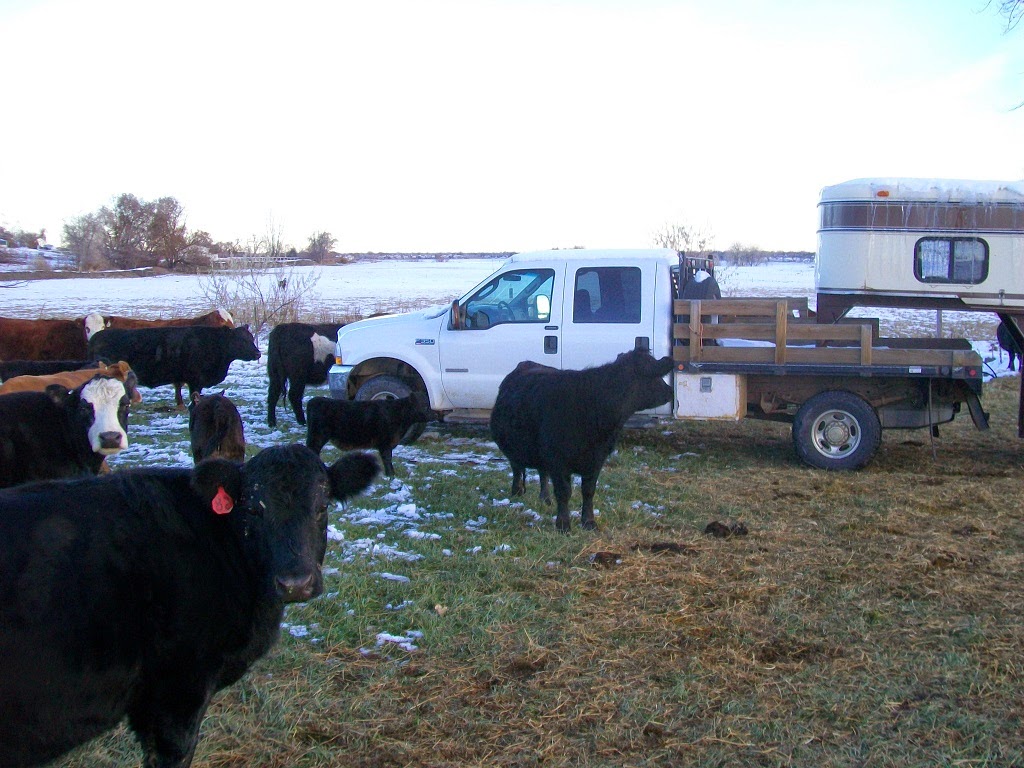 We were surrounded!  Notice the ice on top of the trailer; that's why we moved the horses a little earlier this year.  We have already had -23* and 80 mph gusts...and winter is still a month away.  No way was I going riding.  The only days it was possible, Bill was working on frozen pipes in the lodge (water tends to gush from breaks as soon as they thaw). 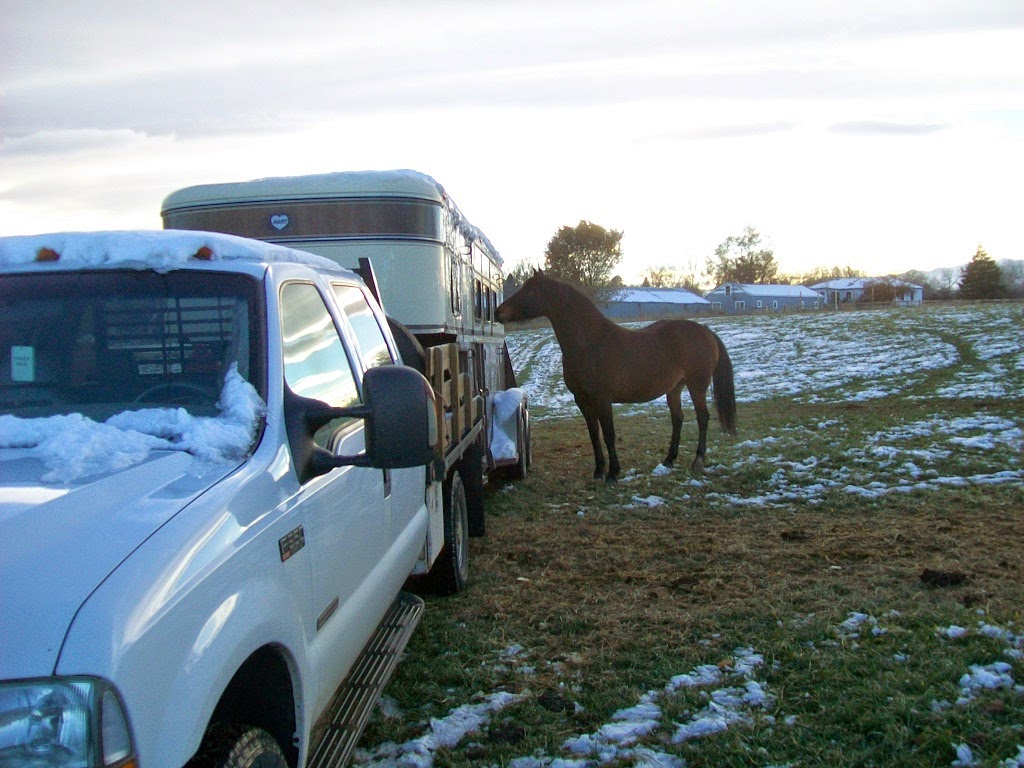 Meet Audobon.  She was the love of Washoe's life when he was younger.  The first time we turned Washoe out to winter pasture, he was just two; I had only owned him a few months.  Audobon, who is about a year younger - and now stands a good hand taller - was in a neighboring pen when we first took the horses off the trailer that year.  He was beside himself trying to get to her; we had to chase him away from her several times before he would finally go off with Ranger and Jesse.  They have since been pastured together during the winter season and she was pretty glad to see him in the trailer, racing around the trailer several times before finally coming to this pose.

After a bit of excitement trying to get all the horses into a roped off corner of the pasture - to keep them away from the cows - we watched the interaction of the first get-together.  Jesse has always been the herd mare, but Audobon is quite a bit bigger than her now and I was curious to see the current status.


It's interesting to see the nuances that we miss watching horses.  In the movie, you actually miss the important parts because they happen so fast.  Bill shot these stills in sequence, and you can see just how subtle their language is. 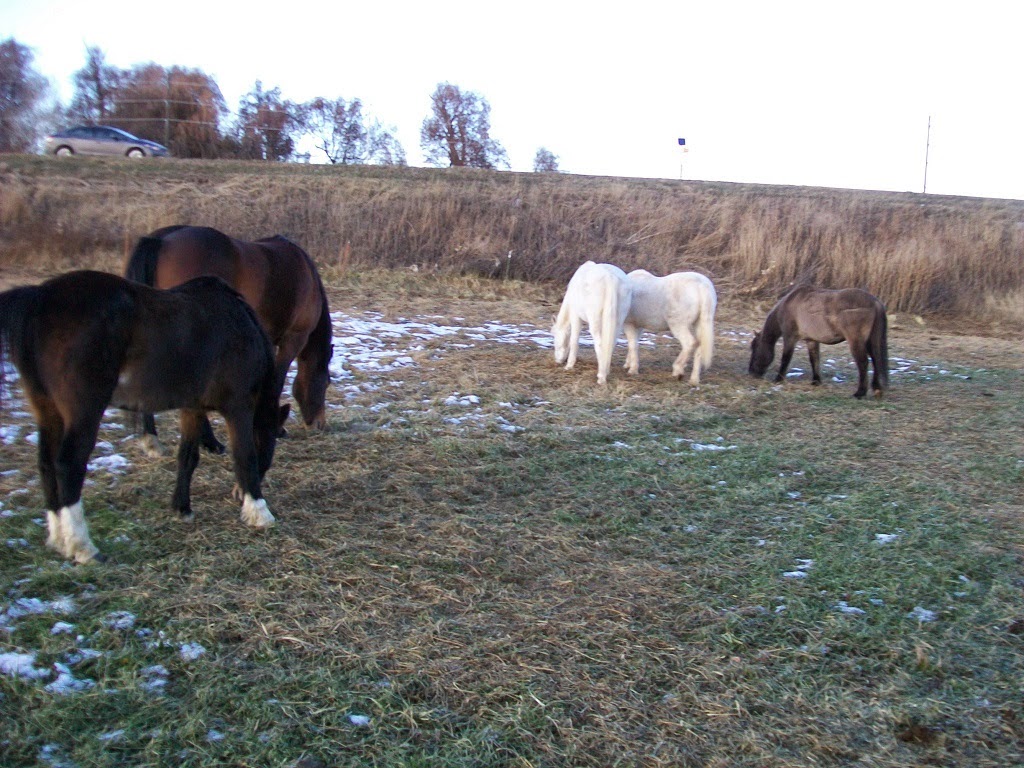 See how the two 'herds' are separated? 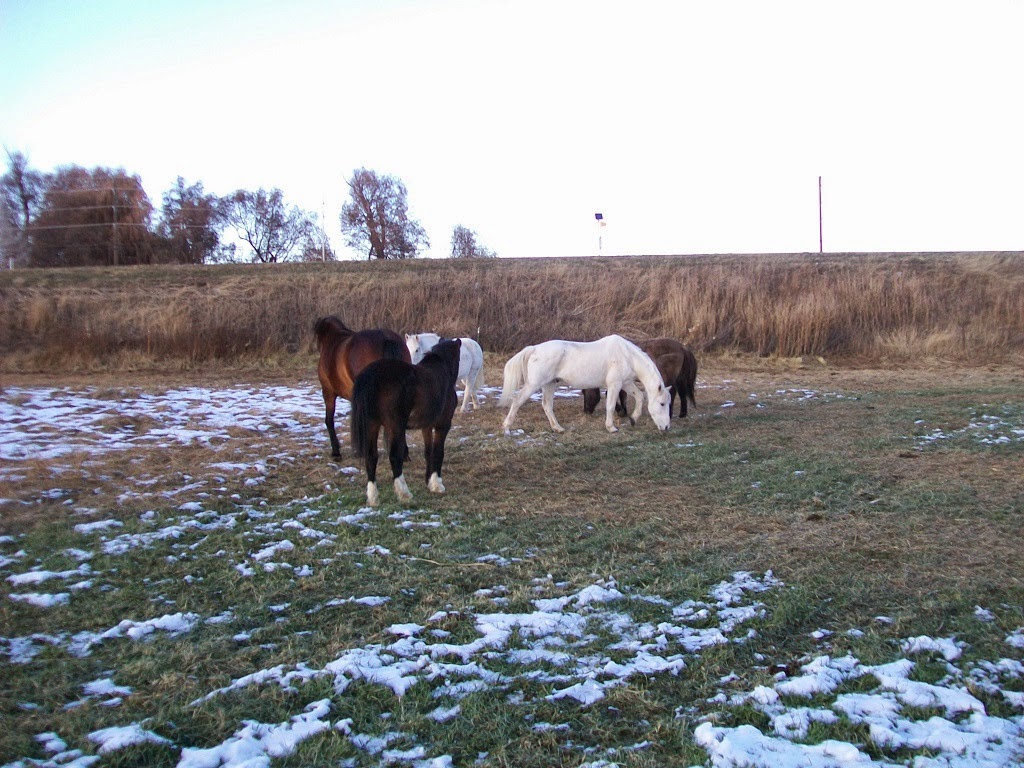 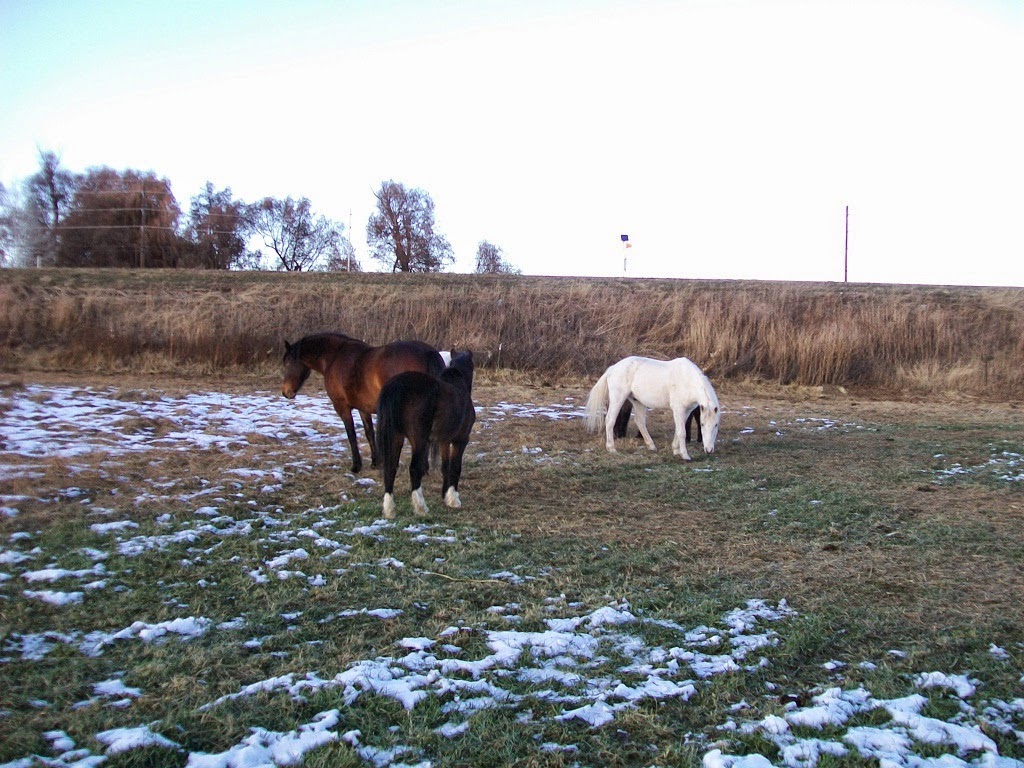 Now she is totally hidden by Audobon, who has turned slightly away from her. 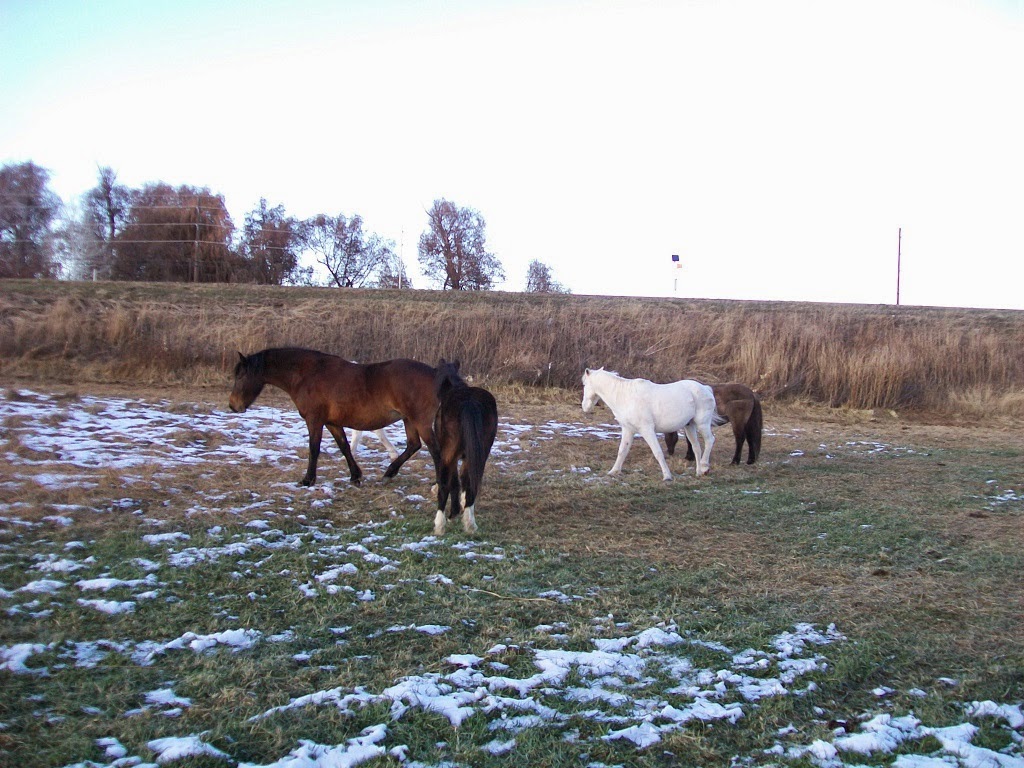 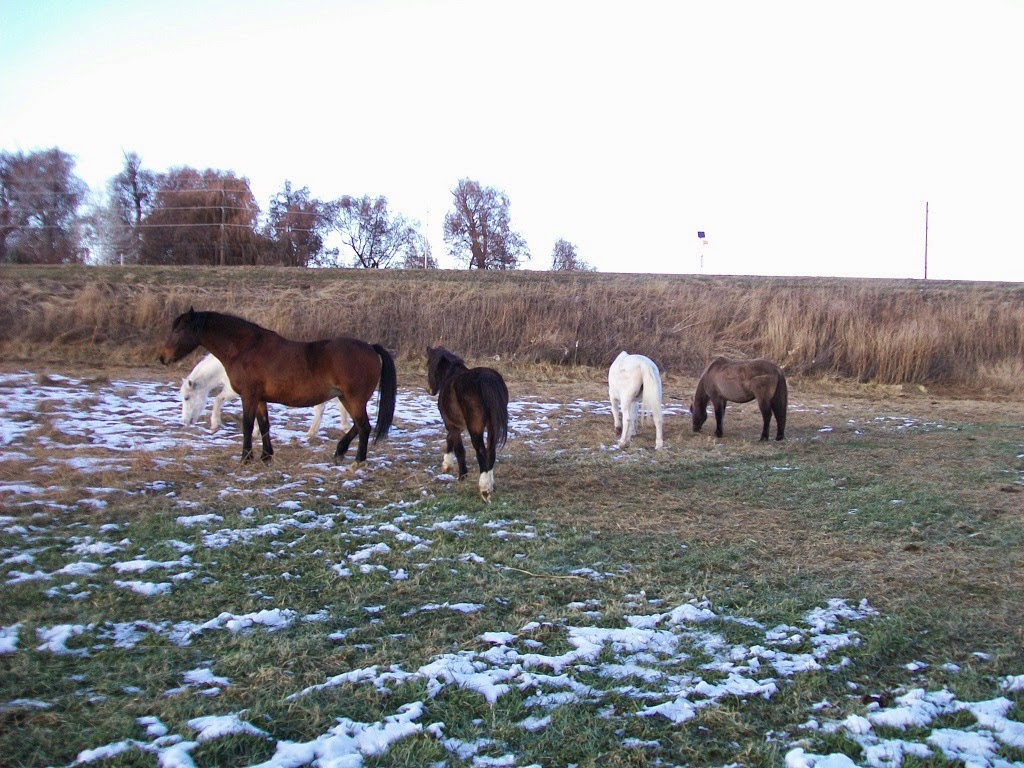 Now you see Jesse coming out from the back with her head in a very slight 'snaking' position. 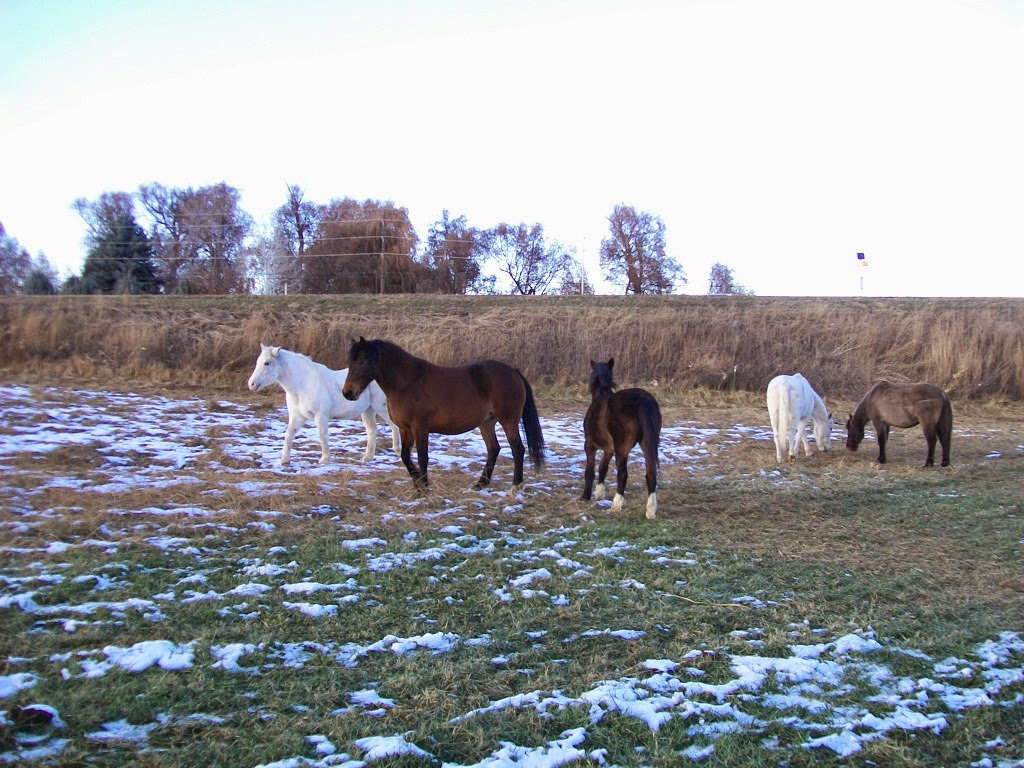 This is the important shot; notice Jesse's left ear.  It's pointed toward Audobon, essentially asking her to go that direction. 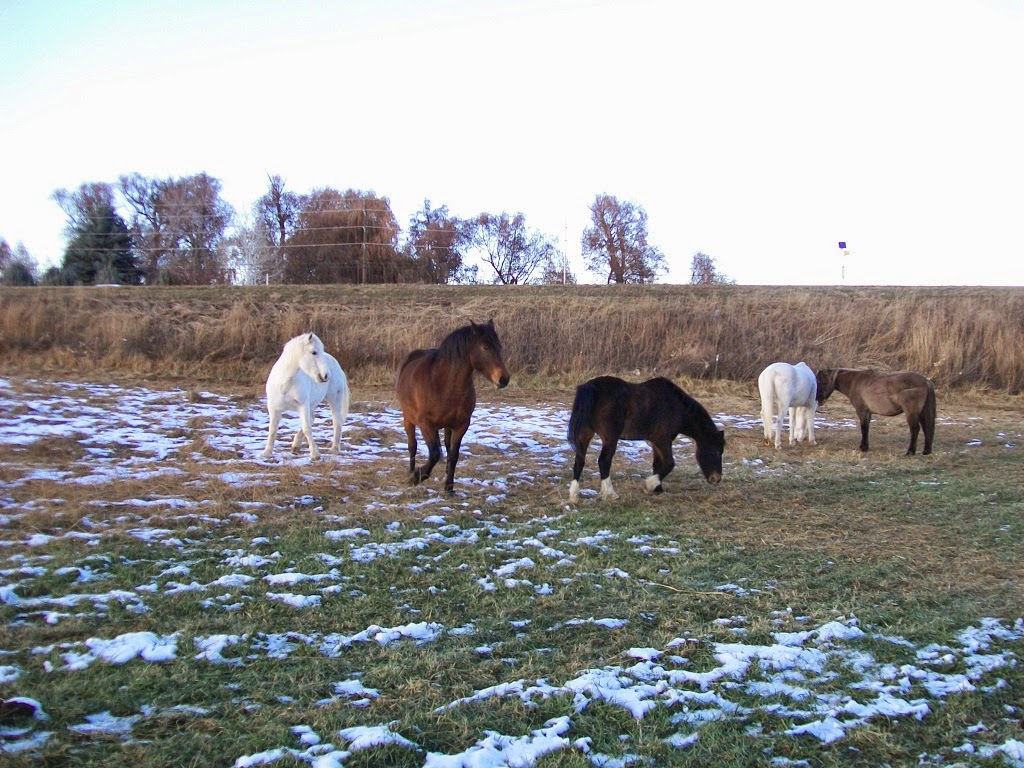 And we have the turn, with Audobon obliging. 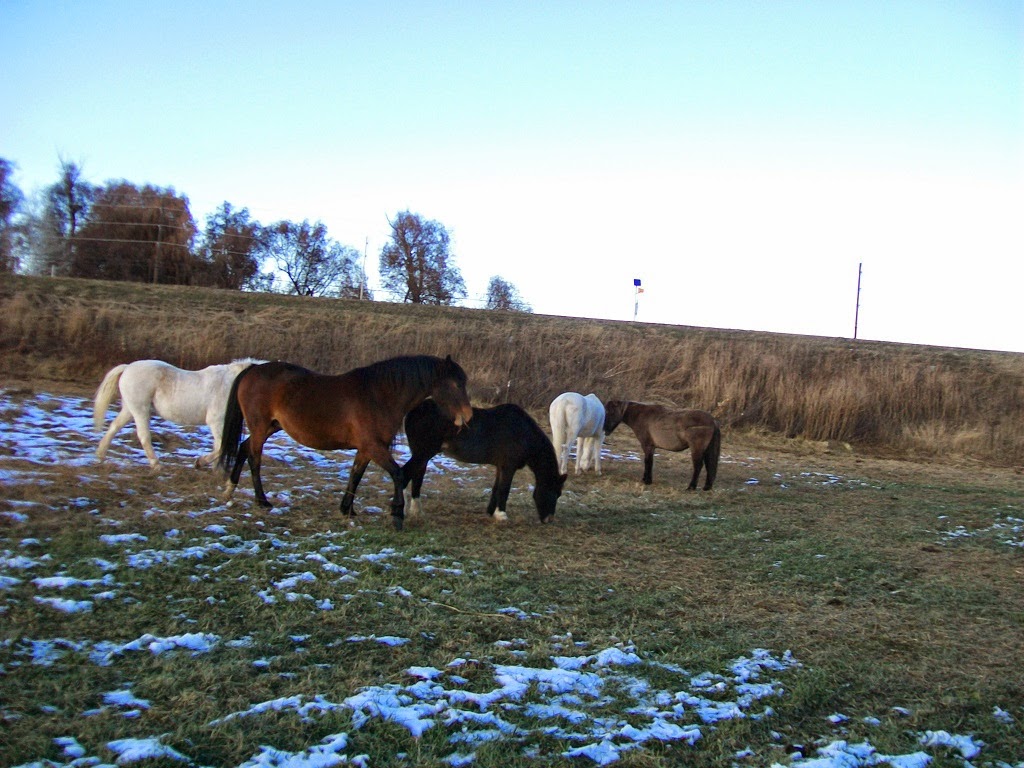 Moving in toward the others. 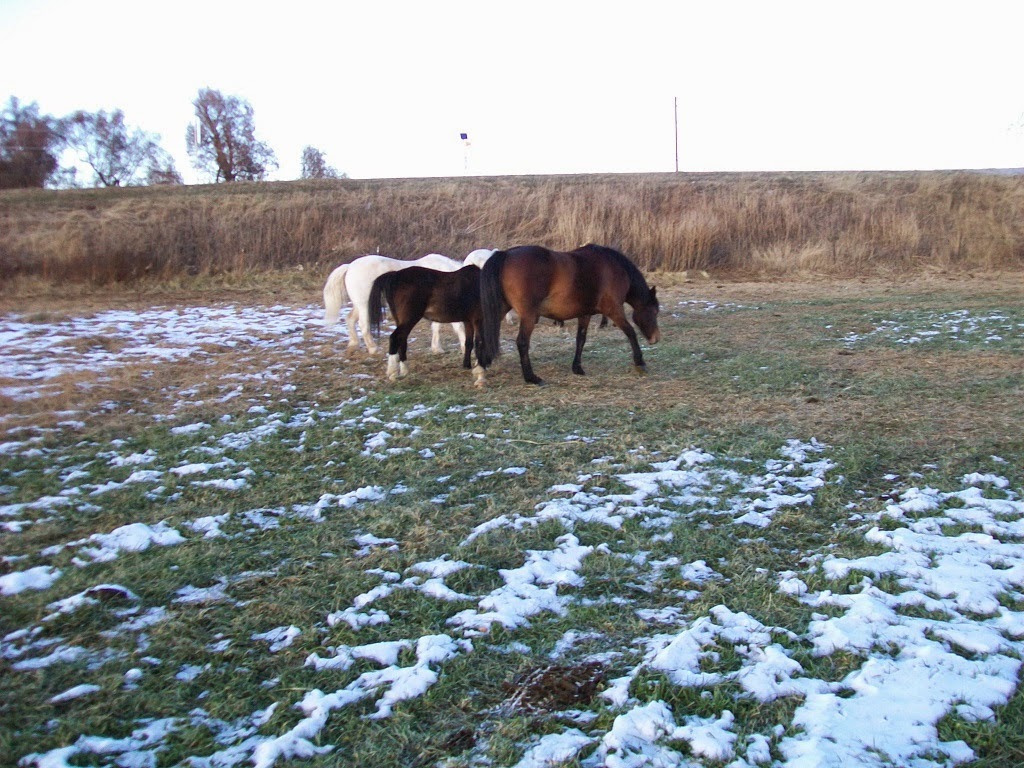 Herd mare has been established.... 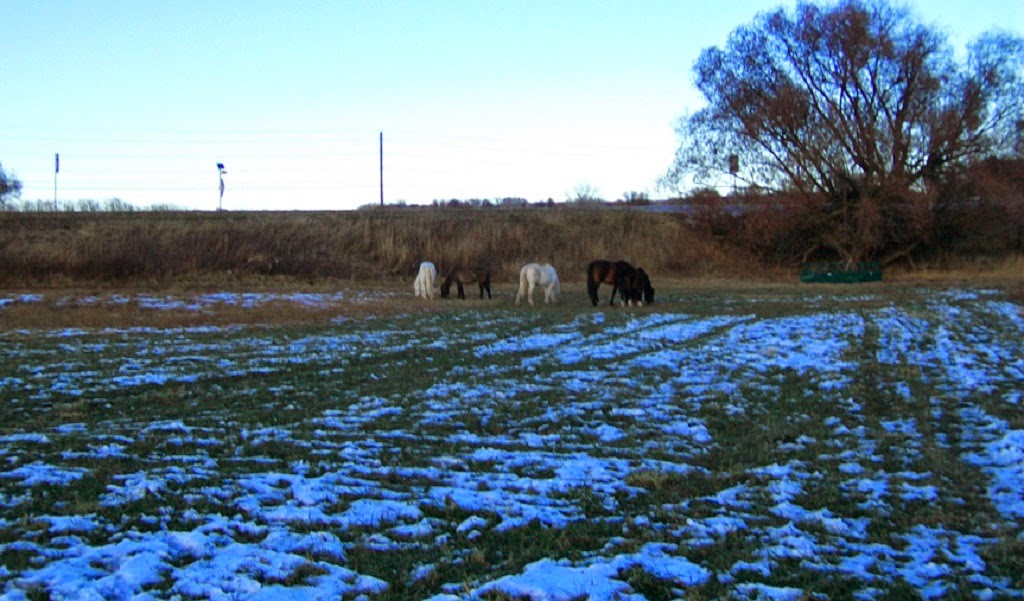 ...and they are all grazing together as one herd.  Peaceful and no theatrics.  Boy, do they love the grass!

I already miss them terribly, but I love seeing them get to be 'free' for awhile.
Bionic Cowgirl

Email ThisBlogThis!Share to TwitterShare to FacebookShare to Pinterest
Labels: weather

On the day before this day Waneeta did not feed me the morning food.  Beel feeded me.  He sayed Waneeta and An-dre-a had goed to Mon-tan-na.  I think that means they were bad.

At night food Beel feeded me again.  He sayed they had picked up the strange horse and his girl in Mon-tan-na and they would be home very late.

In the very dark in the night before this day Waneeta put a strange horse in the next pen.  I would have talked to him but Beel put hay in the food place.  So I eated it.  It was not night food time and it was not morning food time.  Beel made a mistake I think.  I had to eat it.  I did not want hurt Beel's feelings.

In the sun time today I meeted the new horse.  He is nice.  That Mare likes him a lot.  The Kid does not like him at all.  It is the usual.  Beel and Waneeta and An-dre-a and the girl took us for a walk after morning food.  Waneeta gave me morning food this day.  I like morning food. 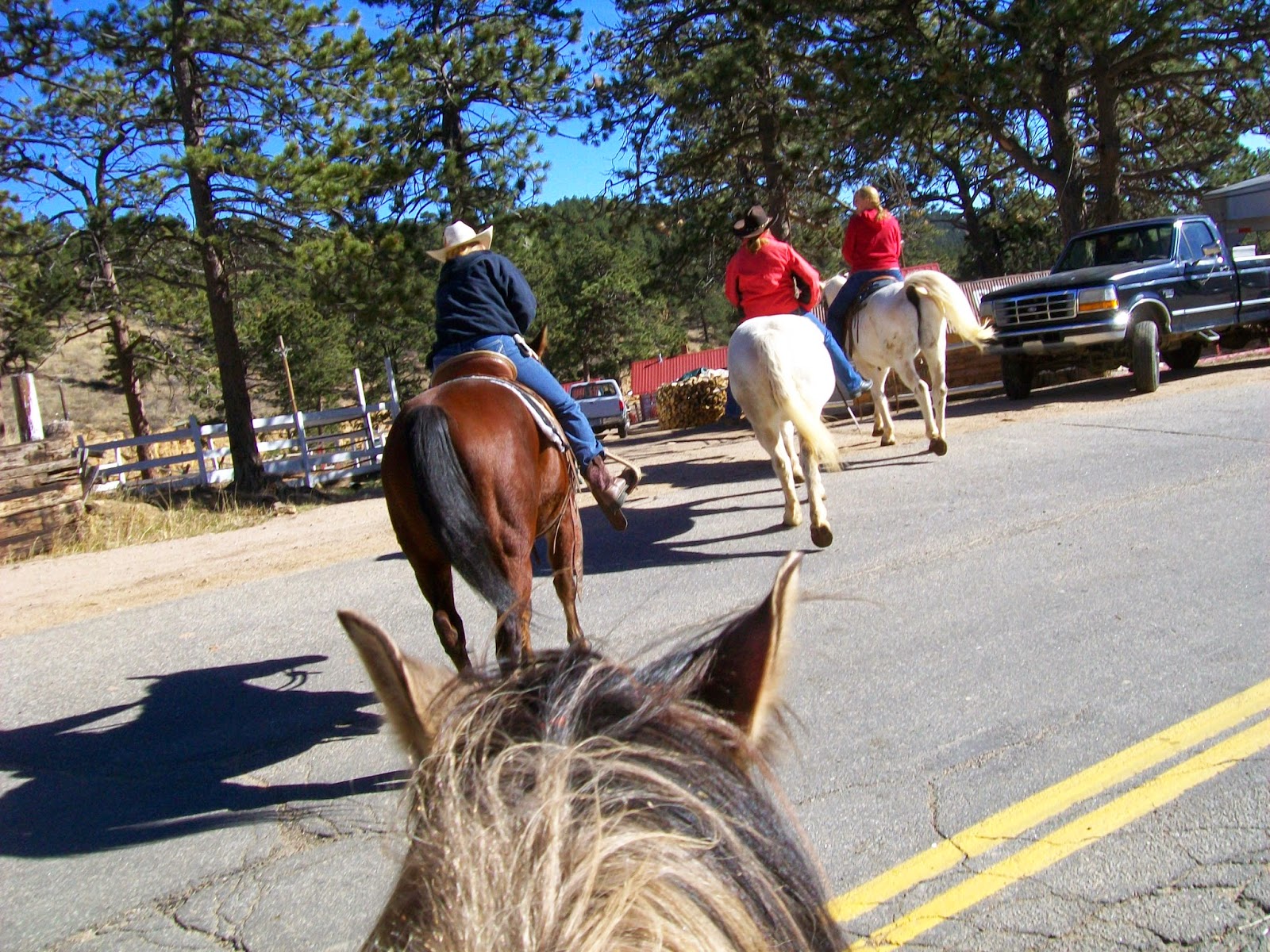 It was a good walk.  Not very far. Beel and Waneeta and An-dre-a were very mean to the strange horses girl.  They would smile and say die Anna when they talked to her.  But she never did die.  That was good because she is nice. 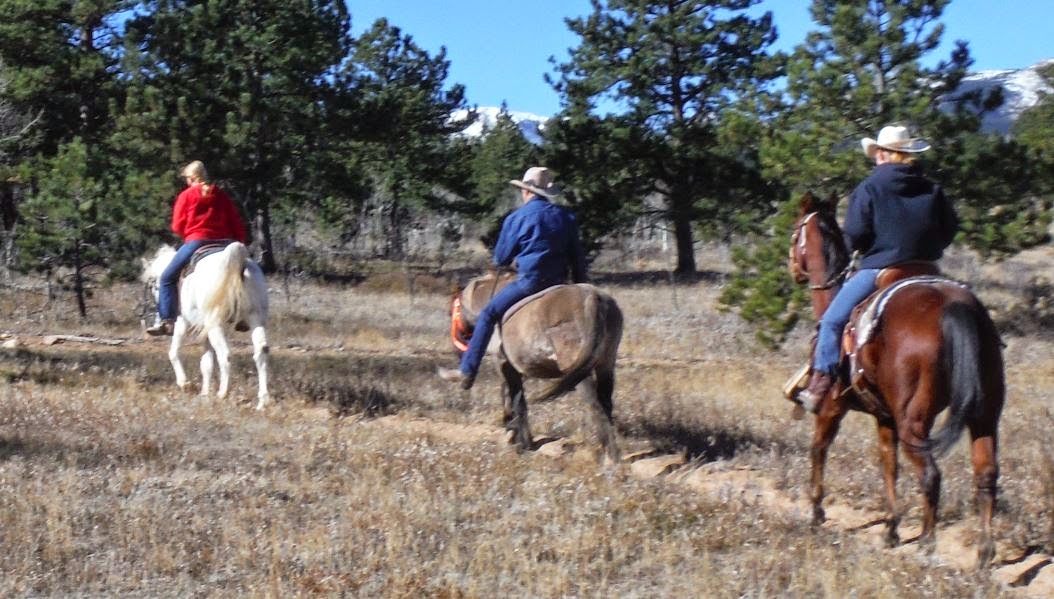 We stopped and the peoples all barked and chirped at each other and then we wented home.  Beel sayed that the strange horse will leave on the day after now. 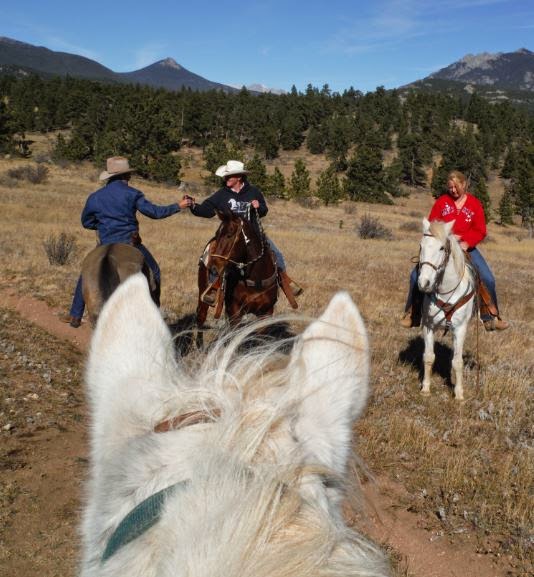 I hope Beel gets me food again in the very dark time.  I would be very polite and eat it for him.

Ranger the horse.
Posted by Allenspark Lodge at 5:10 PM 3 comments: