Just a quick update on the slow feed net I purchased for the horses:  I LOVE IT - and so do the horses!

Unbelievable how fast they took to it.  I still put small amounts of loose hay in the feeder, but as soon as I throw the loaded net in, they all start picking from it - and leave the loose stuff alone.  Yep; even Ranger.  There has always been small amounts left in the net after 24 hours.  I dump the handful out and they wait patiently for me to refill the net.  The operative word in that last sentence was 'patiently'.  They were never patient before, barely holding it together, trying not to paw or stomp at feeding times.  That was actually the first thing I noticed the day after I started using the net; I couldn't believe how much better behaved the horses were.  I think it is so much more like true grazing - picking out a few stems at a time - that they are more satisfied.  No more scarfing food  and then getting bored and picking at the fences and stuff.  They are still consuming the same quantity of hay throughout the day, but none is getting wasted.  Therein lies the savings.  Many times I've gone out to check and found them just 'hanging out', and hay still in the haynet.  Later when I take their 'bowl food' to them, the net will be emptier, but still have some.

So far, so good.  Now to see how long it lasts.  Even if it only does one season, it is worth it to watch the change in their demeanor.
Bionic Cowgirl

This was an unsolicited review of this product.  They gave us nothing.  If we hadn't liked the product, we wouldn't have told you about it at all, because it's embarrassing to get taken...
Bill
Purchased from-
Hay Chix
www.haychix.com
(715)483-1770
Posted by Allenspark Lodge at 9:35 PM 3 comments:

R-  Is this a trick question Beel?

B-  You have reached through the fence, torn open the tarp and are pulling the hay out of the barn!

B-  Ranger, there is still hay in your feeder.  WHY AREN'T YOU EATING THAT HAY?

R-  Beel the hay in the food place is tangled up in ropes.  It is hard to eat.

B-  It is a slow feeder net.  It's supposed to slow down your eating, so you can "graze" all day.

B-  Nope.  You will stop now.  Juanita has re-stacked the hay you knocked down and pulled the tarp back in place.

R-  I will go eat at the food place now

R-  And then you will leave. 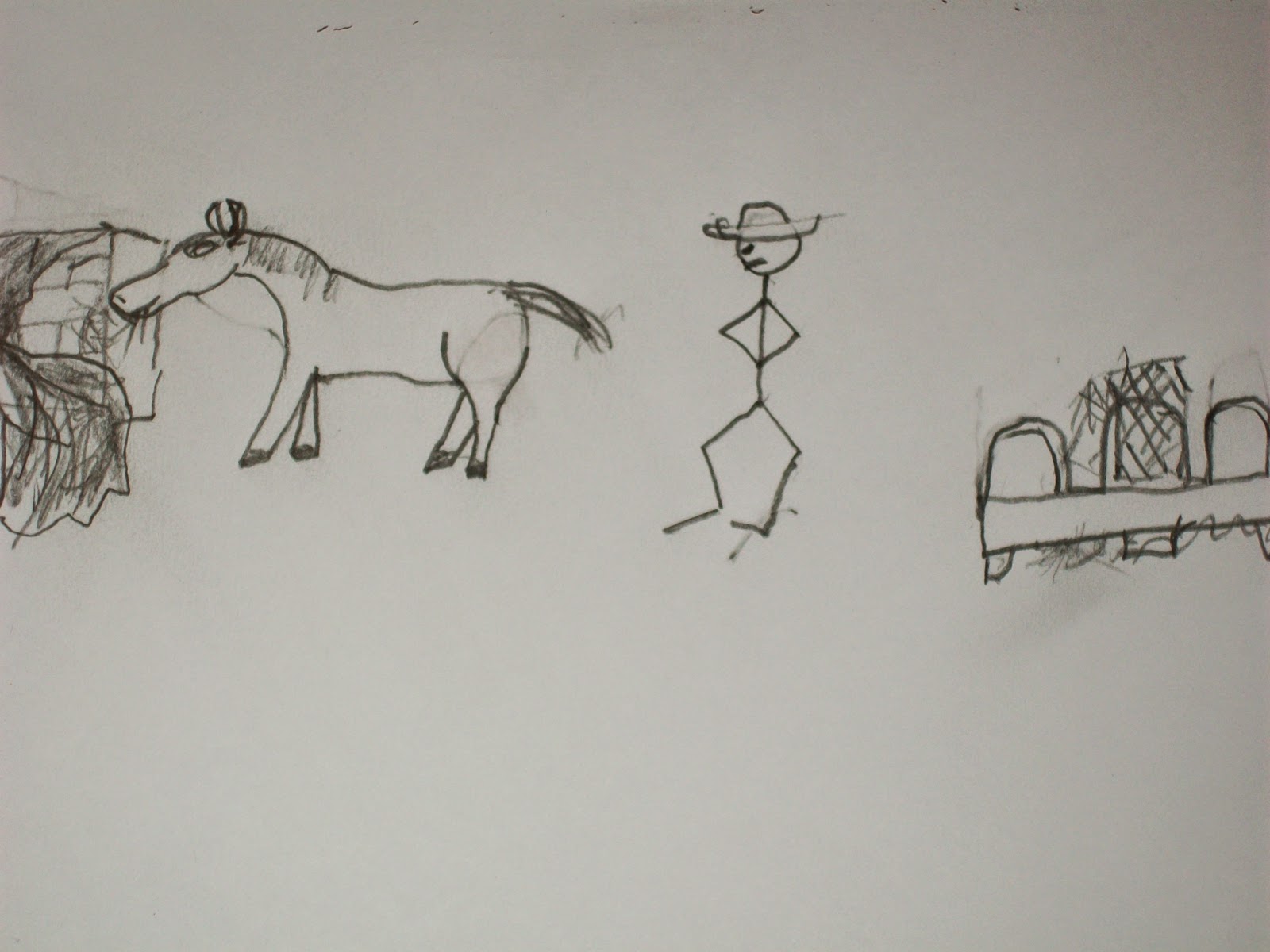 Email ThisBlogThis!Share to TwitterShare to FacebookShare to Pinterest
Labels: hay, R and B, Ranger says

Hay - and getting enough of it - is a major concern for any horse owner.  We have three horses: Jesse, an easy-keeper; Washoe, a flow-thru (those that can eat everything and never seem to gain weight); and Ranger, a 'normal' I-will-quit-when-I-am-full horse.  How to best feed these guys together and have them all at optimal weights?  Last year I had thought I would need a grazing mask for Jesse, who could easily become insulin resistant.  Thanks to good weather conditions last summer and enough ride time (read exercise), I did not have to.  But the issue still resided in the back of my mind, so when I saw a new ad in a horse magazine from a company called Hay Chix, I decided to give it a try.  They sell different types of hay nets to fit your normal sized bales of hay - everything from flakes to large round bales - for a reasonable price.  After much thought, I ordered the size for 2-string bales up to 70 lbs. 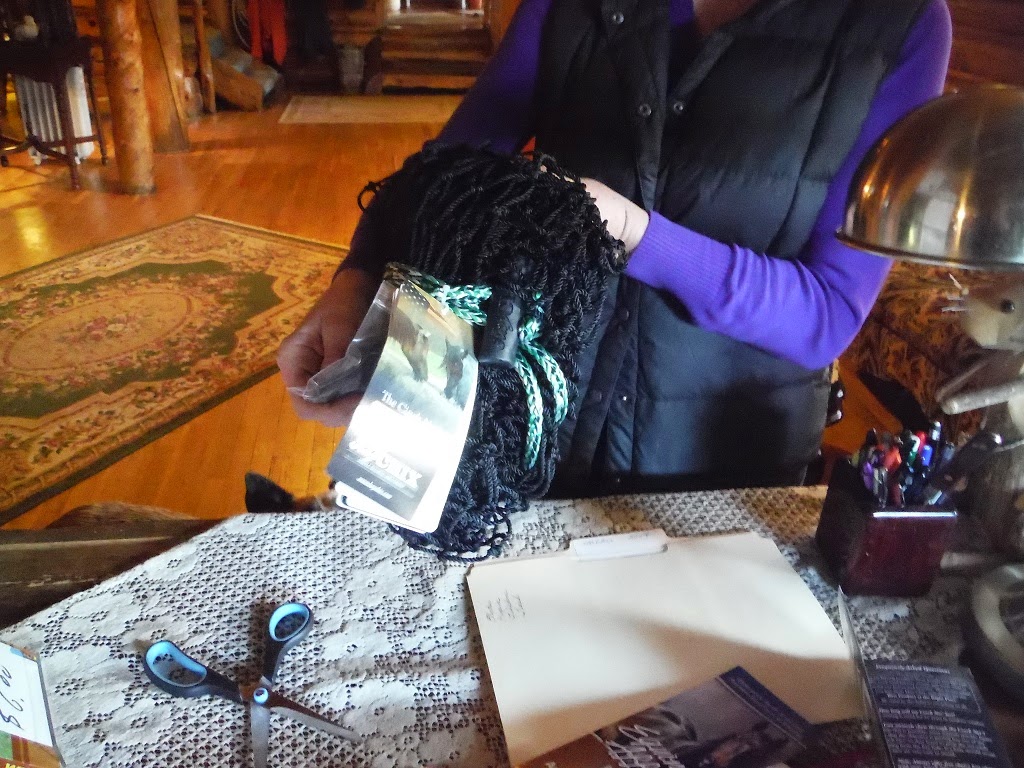 Within a week, my new 'feeder' arrived in the mail.  This is going to fit a whole bale?  I ordered the heavy duty version, since Jesse is known for demolishing just about anything with her teeth.  It has 1 3/4 in. webbing; about one half the size of normal hay nets. 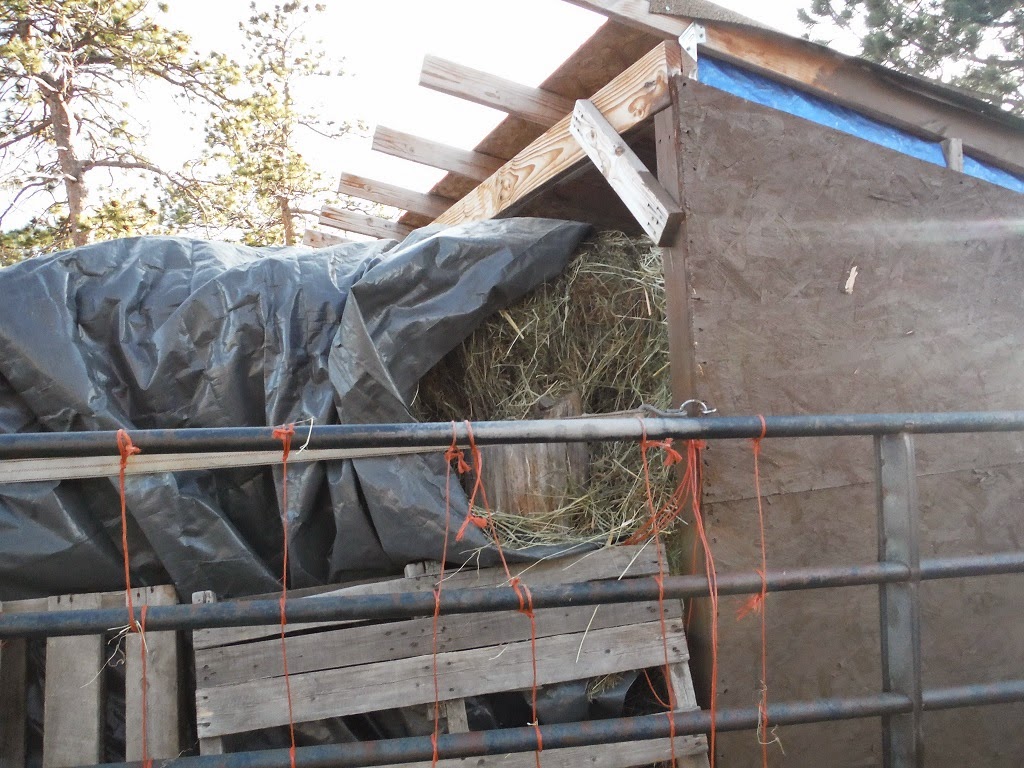 This is one of the things that tends to happen - even when there is always hay in the feeder.  This year it was Ranger's turn to officiate the opening of the hay stack! 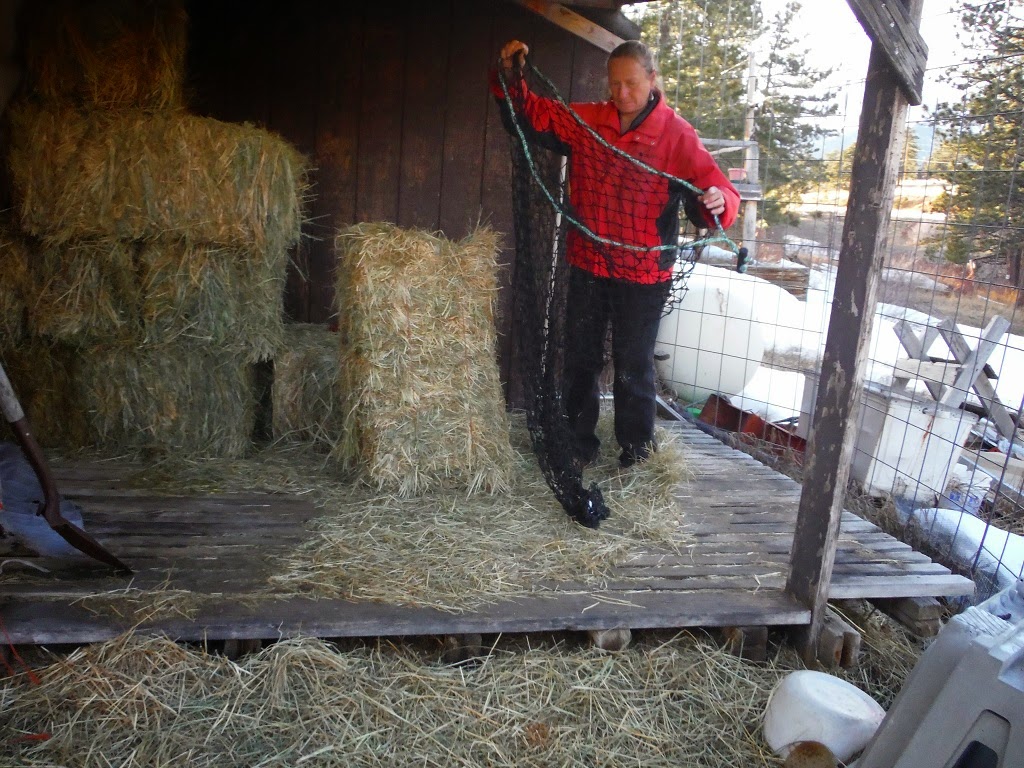 Good, simple directions come with it.  Start by standing the bale on end and opening the mouth of the net. 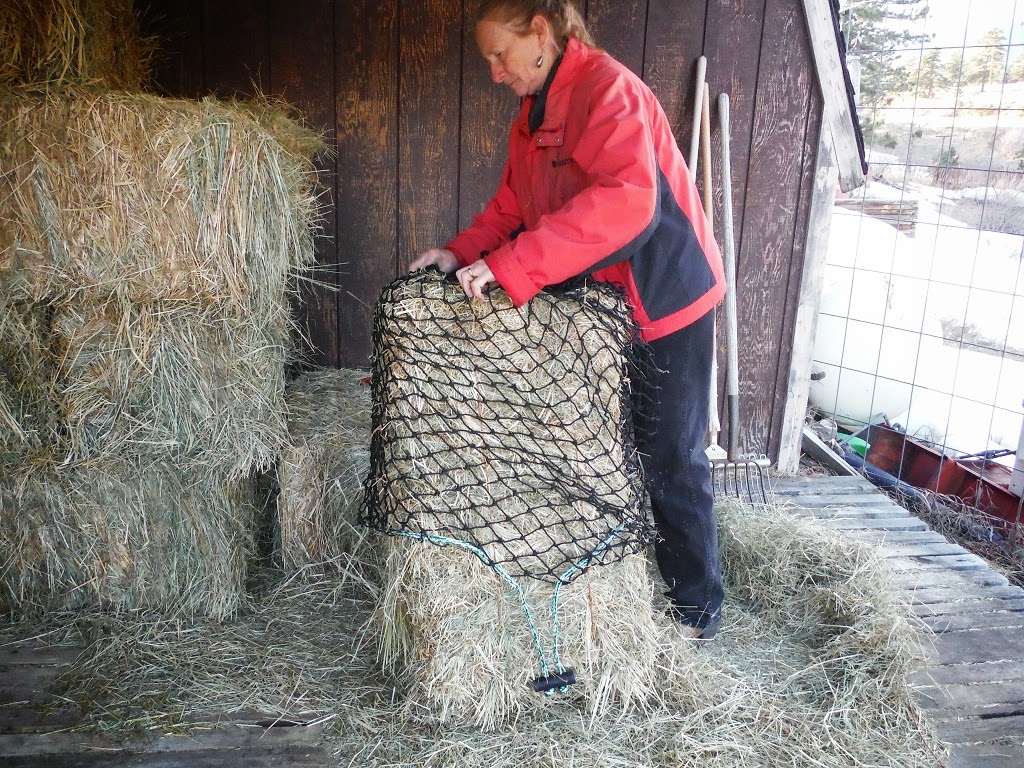 Drop the net down over the hay bale. 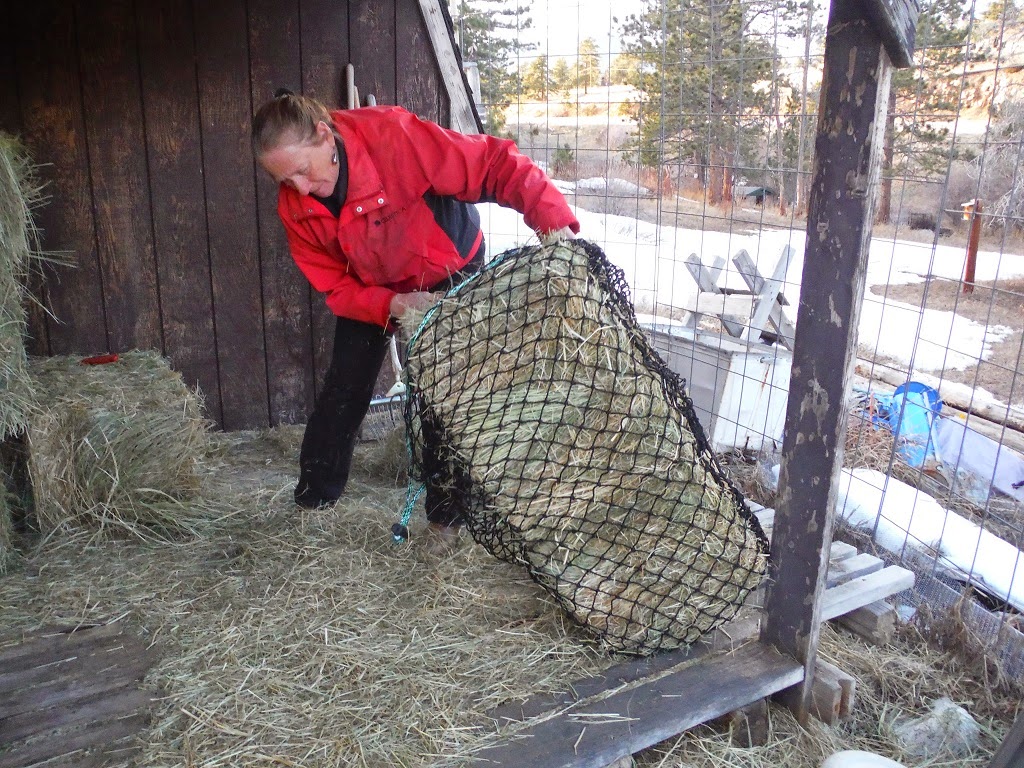 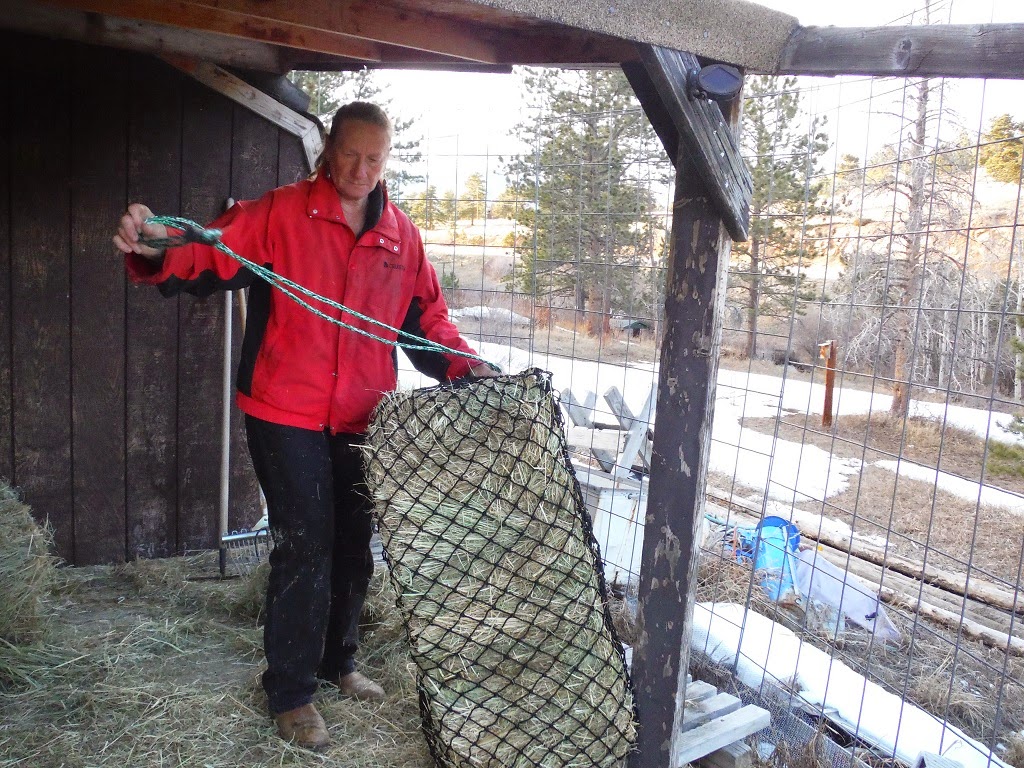 ... slide the boggle down the ropes and tie with a double knot. 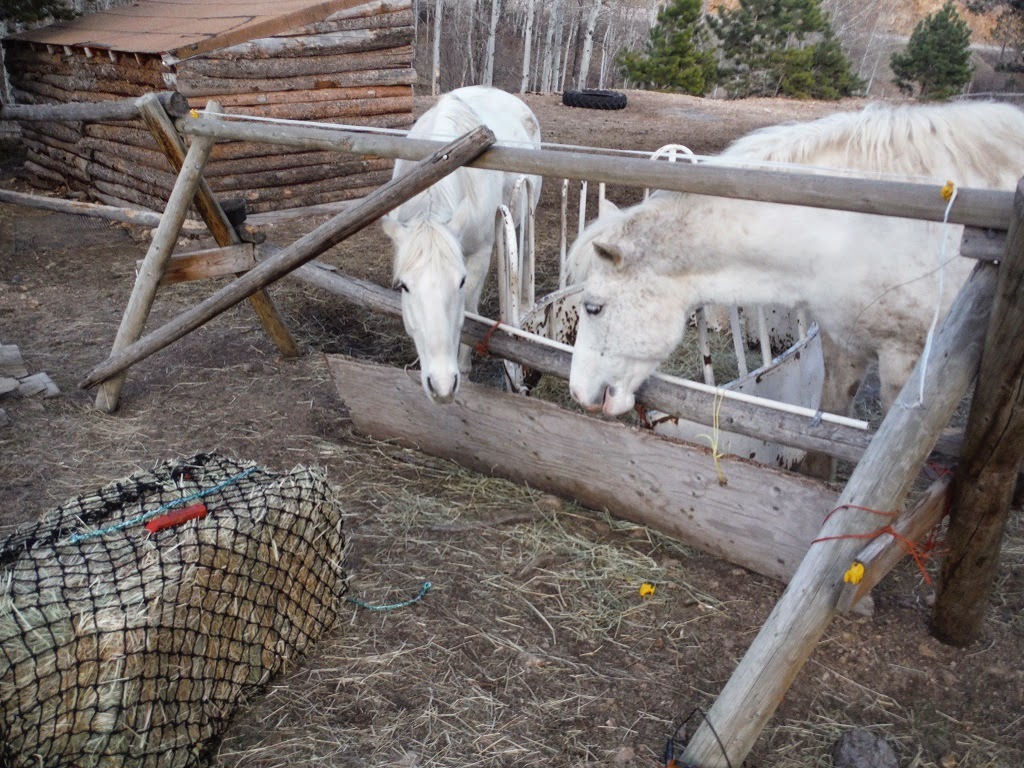 Transport the hay to the feeding location by either using the strings on the bale, or passing the tie rope to the opposite end of the bale and using it as a handle.  I chose to just carry by the strings since that what I usually do anyway.  My greys were instantly interested. 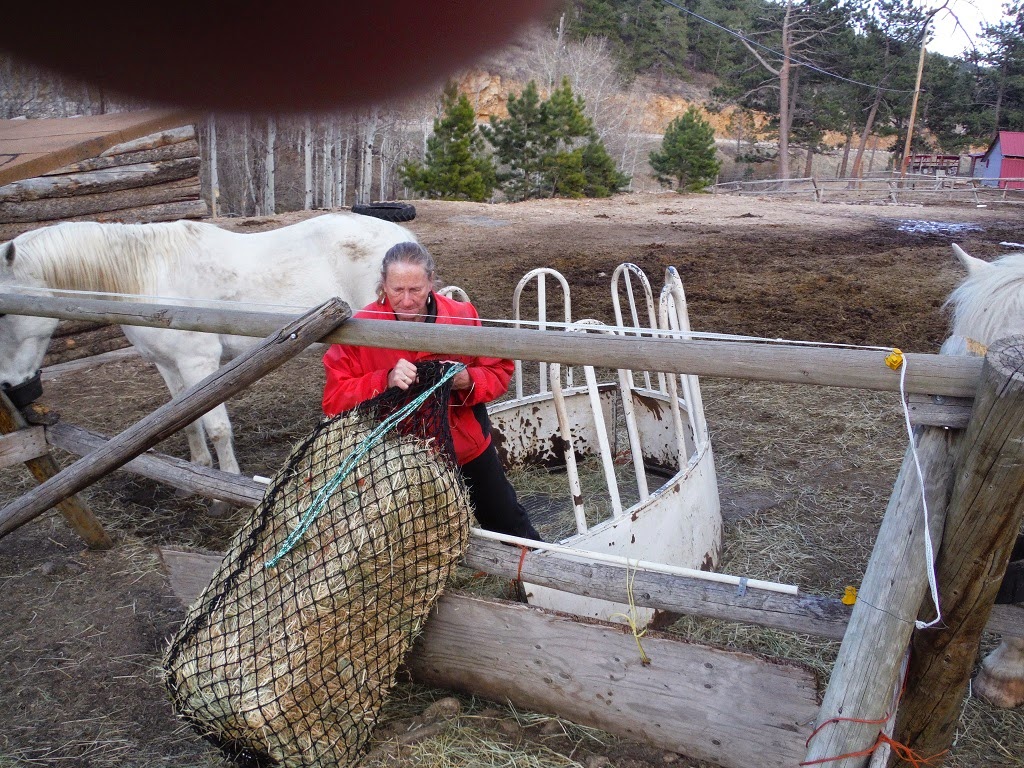 To get it into the feeder, I decided the easiest way was by getting into the feeder and pulling it in.  Washoe ignored me; Jesse was irritated that I was IN the feeder.  Once the hay is in place you can either put the tie strings inside the netting or use them to tie off to something so it can't be drug around.  Considering Jesse's proclivity to do just that, I tied it to the fence rail. 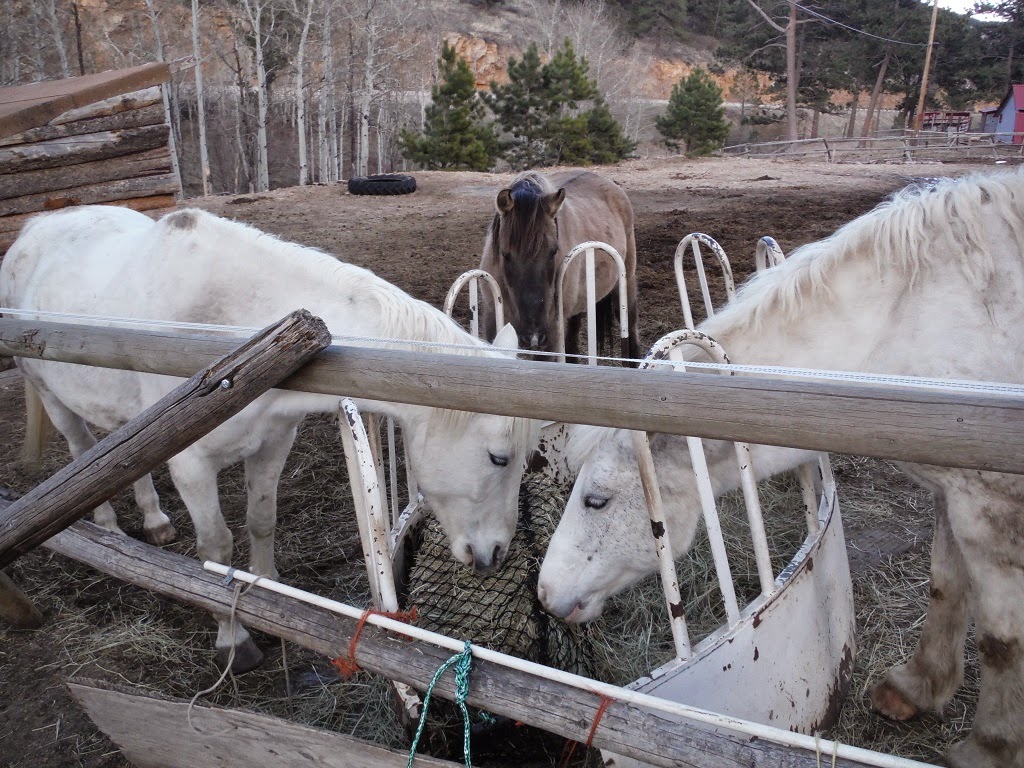 Ranger was NOT impressed; this is him snorting his disapproval!  Then he backed away with an I'm-not-going-there attitude. 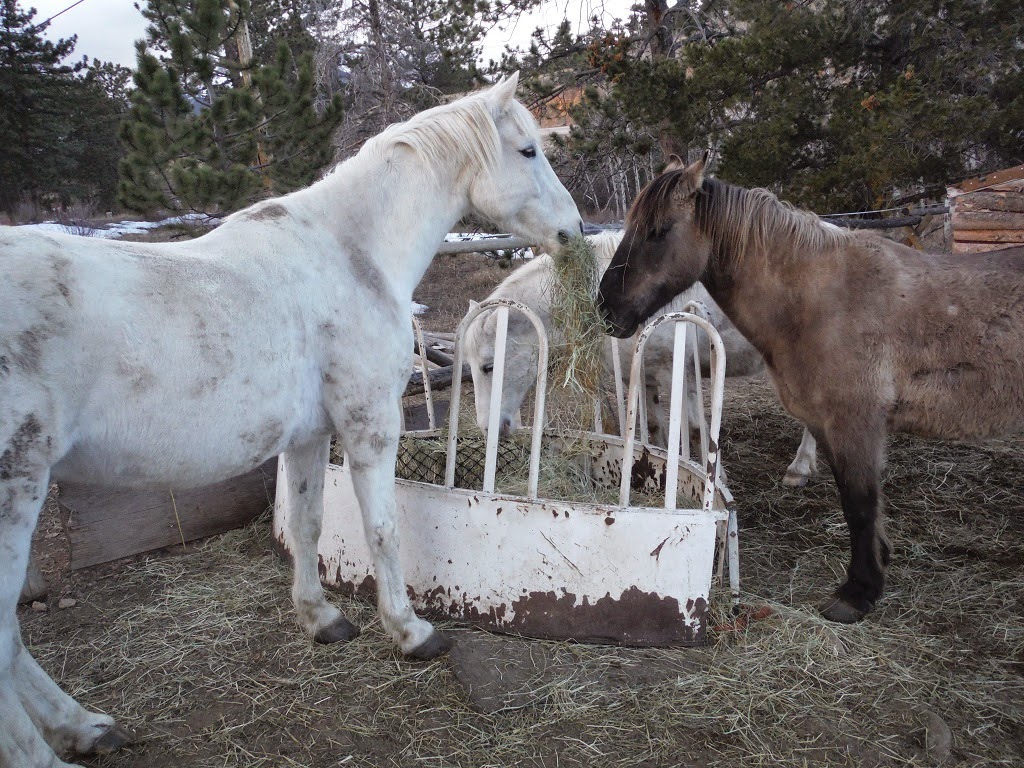 For the first few days or so you are supposed to cover with lots of loose hay, until they learn that there will always be hay without getting frustrated at the slow feed idea.  If you notice Washoe's mouthful of hay you will see why there is such a mess.  It would be nice to not have such waste. 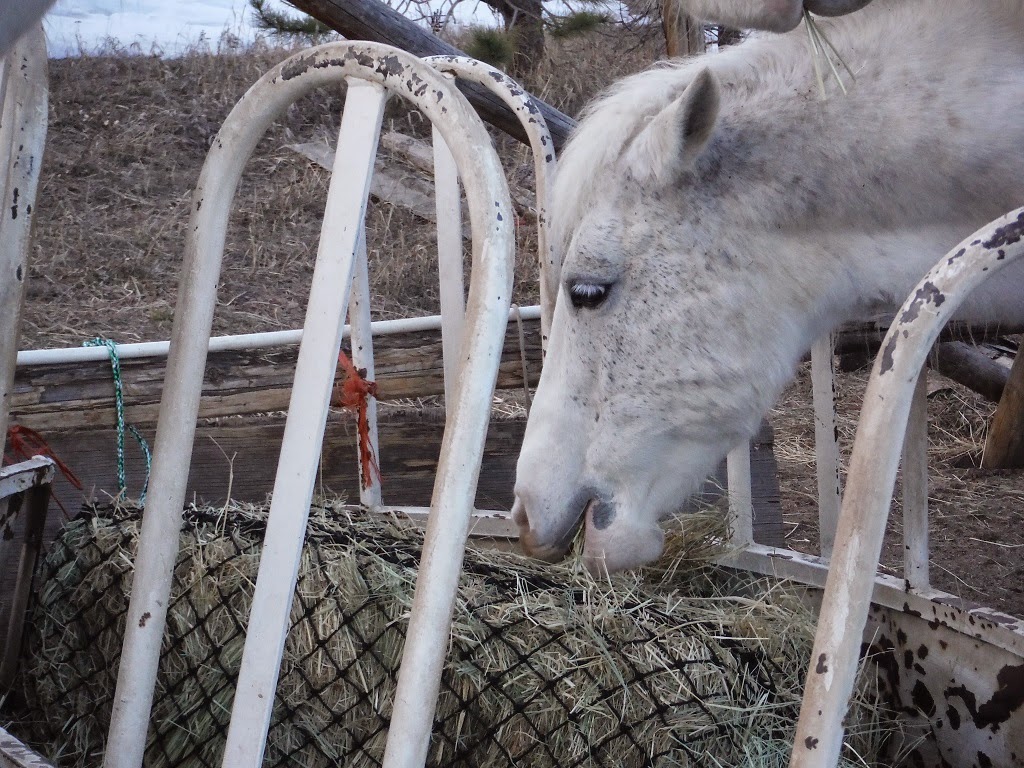 Jesse seems quite pleased and preferred to eat from the bale while the others ate the loose stuff - and she is the one who needs this the most.  Yay!!! 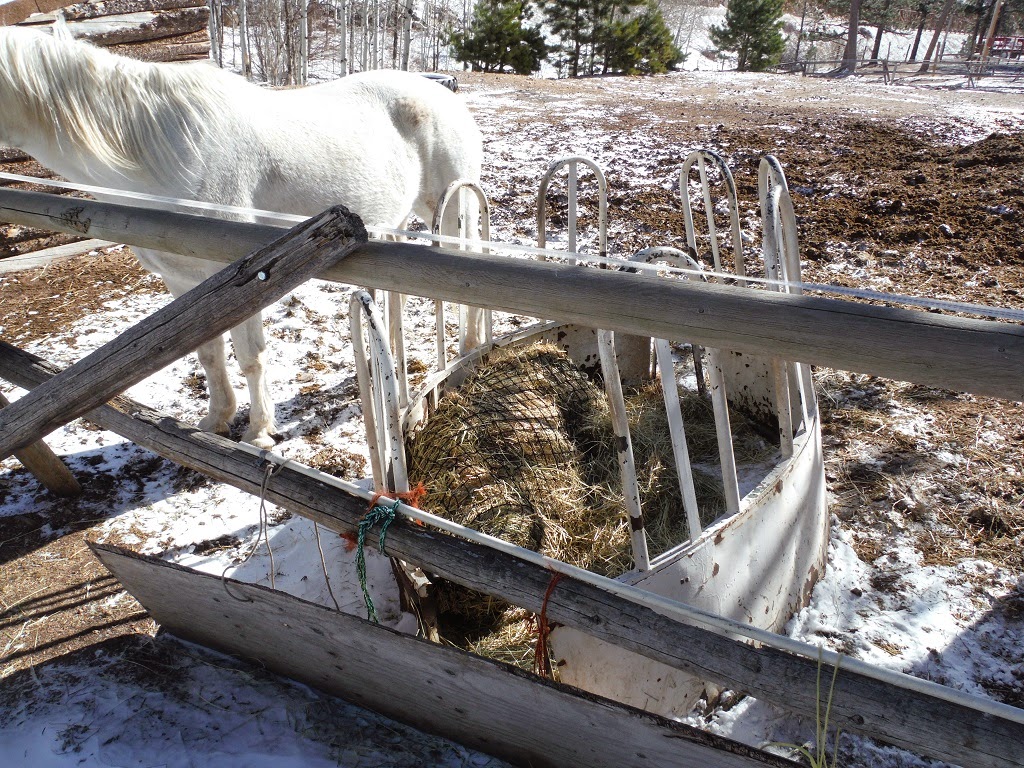 This morning the net was still almost full - and there was plenty of loose hay left.  The horses did not seem upset at all.  Tonight there was still plenty of loose hay and the net was a little less than half full.  The horses seem quite happy so I guess they are making the transition pretty fast.  Notice the new snow on the ground.  Winter is not over yet up here.
Bionic Cowgirl

Well, our horses are back up on our mountain now.  We picked them up a couple days ago and trailered them home.

Our horses get shuffled around to several different areas for their winter boarding, down at a lower (and warmer) part of the state where they can graze freely. The last property they stayed on this winter is a hay field, and the unseasonably warm weather started the grass growing.  So the field's owner wanted the herd off so they wouldn't damage this year's crop.  I suppose a herd of horses stomping, eating and pooping all over the hay field would limit the productivity of the acreage somewhat.  So home they went.

This is what we picked them up from.  No snow. 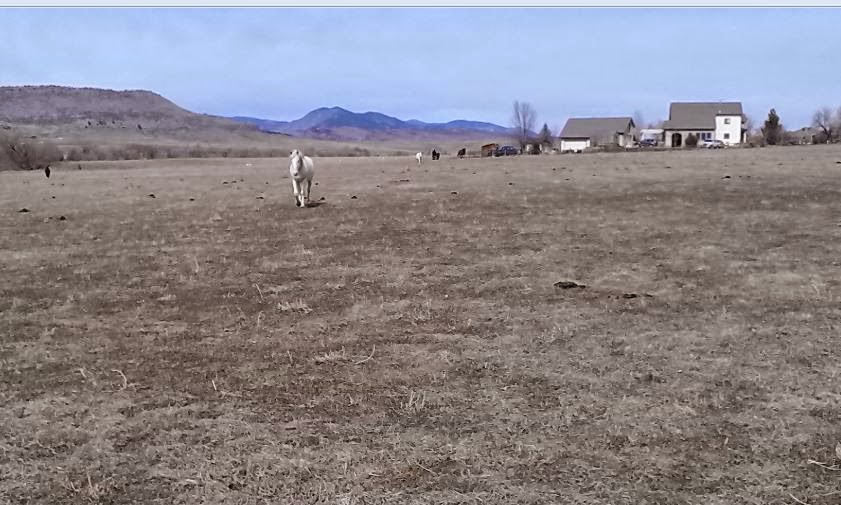 You can't see Ranger in this picture.  He took to hanging around the back fence of the farm house.  I suspect treats were involved.  He wouldn't say.


In this picture you can see in the background where they were going.

About halfway up the white peak on the left. Yeah.  Snow.

When we unloaded them from the trailer, the first thing they did was roll.  A lot. 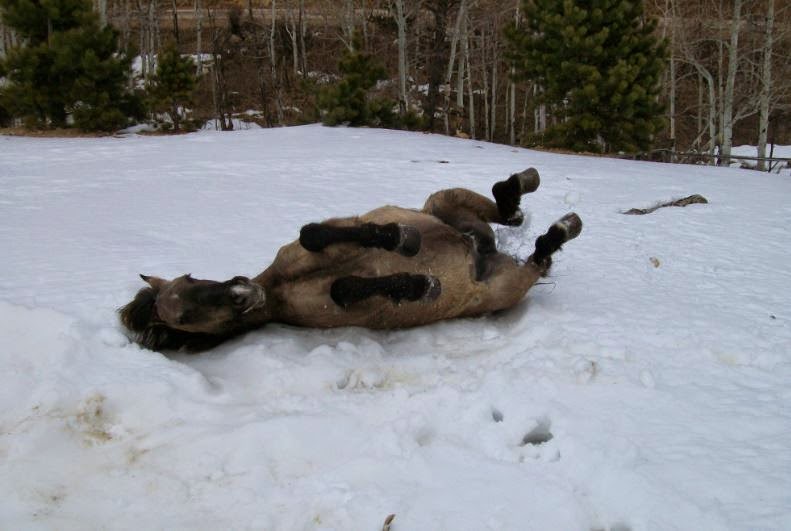 After a good scrubbing in the snow they went off to check out the feeder.

Then suddenly, they heard it. And they went crazy.

For better than 20 minutes, they talked to a chicken.  It's really kind of embarrassing.