Yesterday, we had sort of a 'day off', meaning we could break away from the Lodge and attempt to get some town chores done and maybe have a bit of fun.  Yes, we had guests, but they were all staying through and were fine with us being gone for a bit.

I had my yearly physical a couple days ago and was told that our doctor's office no longer draws blood for testing (insurance won't pay), so I got to go to a "certified phlebotomist" for the draw.  We also needed to get brake pads for the van and pick up more milk.  You know, just getting small stuff done.

Our oldest daughter (GunDiva) had suggested we ride their horses as an option for the day.  That actually sounded fun - even if it meant a long drive - so off we went to her place.  The horses happily greeted us at the fence, bringing with them a tumble weed they apparently like to play with; it had been quite a while since we had been there so they got a lot of loving and a good brushing. 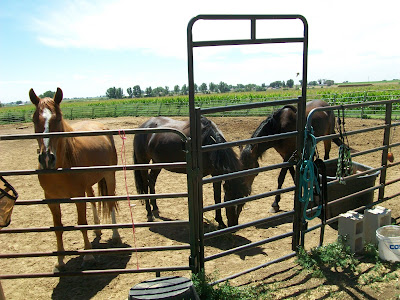 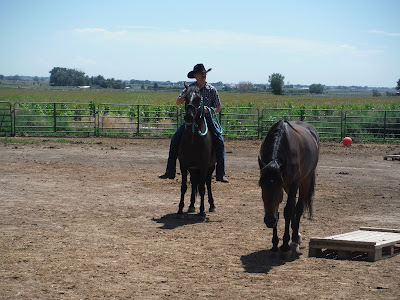 The extra horse is Pearl, who turned into quite a pest because she wanted attention too.  I spent about 15 minutes just leading Copper around with Pearl following us so Bill could work with Skeeter 'unattached'.

We discussed Pearl and decided it was great training to just ride around in the corral with her being a pest so the horses could get used to paying attention to their rider and ignoring a loose horse, so I headed to the fence to get on Copper. 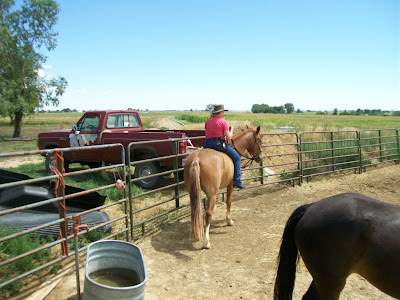 Neither horse thought using the fence as a mounting block was a big deal.  It took me a bit to get Copper to move.  Just sitting up straight on my horses means to move out.  I know neither of these horses like much leg, so I carefully nudged with my calves and he tightened up into a ball.  OK. Let's see.  How about a kiss.  Yep, that worked - we had forward motion.  It's been a really long time since I have been on this green of a horse, so it was a lot of trial and error, but Copper was patient with me.  My last 'green' horse has been extensively ridden for the last 10 years now.

This steering thing in a rope halter was very new to him but he picked it up quickly; much better after I remembered to keep my hands low and wide apart so the signals were clear.  We had a pretty good time trying to avoid the pest and not run into Skeeter and Bill, but it gave him a reason as to why I would want him to turn a certain way.  Our only near mishap was when Pearl kept jabbing him in the flank with her nose;  Bill came to our rescue by riding Skeeter in between us and Pearl.  Copper had given thought to a crow hop when he realized it wasn't me tapping him. 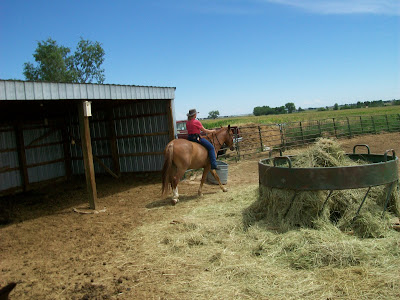 Apparently Copper always has his ears back like this when he is being ridden.  He's not mad or upset; just paying very close attention.  He is such a sensitive horse!  When Jesse has her ears like that it means she is upset with whatever Bill is doing with Ranger. 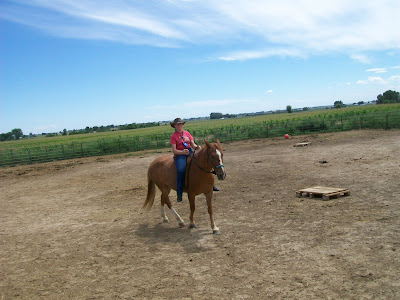 Bill got much more forward motion with Skeeter, but he has had more 'ride time' on her.   This was my first time on Copper and I was very tentative, which made him more so, too.

All in all, we had great fun and everything went well, ending on a happy note. 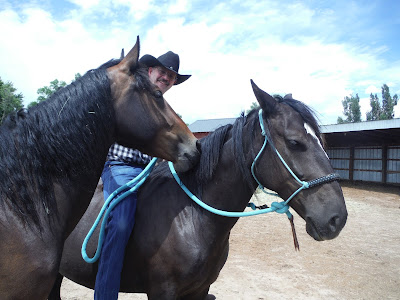 Thanks, GunDiva, for sharing your horses, and Jay, too.
Bionic Cowgirl
Posted by Allenspark Lodge at 12:16 PM 2 comments:

What can I say? That's Beel for you!

A week ago or so, Nebalee, Asset and I went up to the Lodge to have a HellHat making party. As we were assembling our HellHats, Beel was playing with the discards. I knew he had to have something up his sleeve.

It took us about an hour to complete our project and when we were done, Asset and I both had HellHats that perfectly fit our personalities. 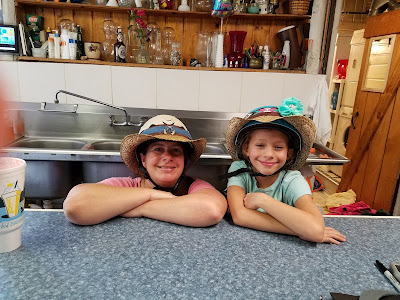 I happily posted about our project on Facebook as we went along, not thinking a thing about it. When I got home, I looked at the comments and found this:

(If you want the story behind the HellHats and the process, click over to Tales from the Trail.)
Posted by GunDiva at 8:00 AM 2 comments:

Email ThisBlogThis!Share to TwitterShare to FacebookShare to Pinterest
Labels: Beel, Bill, HellHat, What's he up to now?

I (GunDiva) hate, hate, *hate* circus tricks. I think they're dumb and not anything that a horse would do on their own.

I know a lot of people think it's fun or cute to teach their horse to sit on command, but I don't so I have no intention of teaching any circus tricks to Skeeter.


One morning, Jay and I unloaded a new 3X4 bale. Skeeter must have had an itchy butt, because she backed right up to the bale and started scratching herself on it. Next thing I know, she was sitting on the bale. Full-on SITTING! Both hind legs off the ground, butt on the bale, front legs supporting her.

So much for me not teaching her circus tricks - apparently, she's going to teach herself.

(There are useful tricks out there that I don't mind. Mom teaching Jesse to fetch has been amazing. Drop something while riding? "Jesse, pick it up." Perfect.)
Posted by GunDiva at 7:48 PM 2 comments: