My horse is getting old.

The last few times I've been out on Ranger this summer, he has lagged behind even more than usual.  He has never been what you might call a "high energy" animal.  But now he's doing a little limping on his rear, not much, but noticeable.  Even when he was being ridden by a much smaller friend or our granddaughter, it seems to be a lot of work for him to walk up the mountain.  On one trip around the block, I ended up getting off of him and walking, as he was "forging" (front and back hoofs colliding at each step) at a trot, and sometimes at a walk.  We called the vet in to take a look at him.

It took a couple days to get the vet up here, and by then he was walking fine, just slow.  We figured he may have gotten into a scuffle with one of the greys and gotten kicked.

So while the vet was up, we had his teeth "floated". It had been 7 or 8 years since the sharp edges had been ground off. Occasionally he had been choking on long strands of hay and he was dribbling a little grain, so it was time.

Now, the old guy has always been a cheap drunk.  One shot, and he's out of it.  The vet gave him his shot, ground the points down and found a tooth that was aimed sideways into his cheek.  He ground off the edges of it, too and we discussed getting an equine dentist up here for its removal.

The vet left and Ranger stood, sort of, trying to get it together enough to walk the 15 feet back into his pen with the other horses.

B-  You're sort of swaying there.  How in the world can you stay up with your back legs crossed, and stretched out THAT FAR behind you?

After an hour or so, he perked up and headed back with the other two horses, who had been standing by the fence and staring at the old guy with great interest and concern.  He spent the next 8 hours licking and feeling his teeth.

This afternoon, I went out to catch the horses and put them in our back yard to "mow".  As I came after Ranger with his halter, he decided he wanted NO PART of it this time.  There just might be a vet involved again.

I have long been able to stop him by grabbing his tail and pulling.  He will stop, but... then what do you do?  He walks off if you let go of his tail, and he is short coupled, but I still can't reach his head to halter him while holding his tail.  This time, however, I noticed as I pulled his tail to the right, he would turn to the left.  And if I pulled his tail to the left, he would go to the right.

So I walked along behind him, tugging one way and then the other until I head "steered" him into the runout shed and into a corner. He looked over his shoulder at me seeming somewhat surprised, and I haltered him.

He was okay with going to mow.  No vet involved.  He spent an hour at it with the others, and then went home, still moving slow.

He is still losing a little weight.  His ribs and his hip bones are showing a little more than usual.  His face has almost as much gray hair as mine.  And walking is more of a chore than it used to be.

I think I may have to retire him soon.

Email ThisBlogThis!Share to TwitterShare to FacebookShare to Pinterest
Labels: Ranger

B-  Hey Ranger.  I've got something new for you to try.

B-  Juanita thought the flies were "bugging" you.  Ha!  Get it buddy?  Bugging? 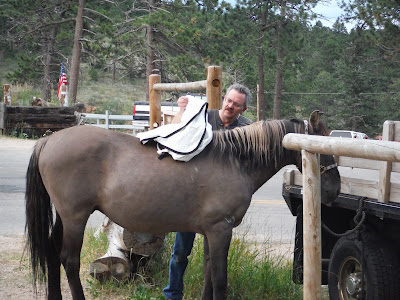 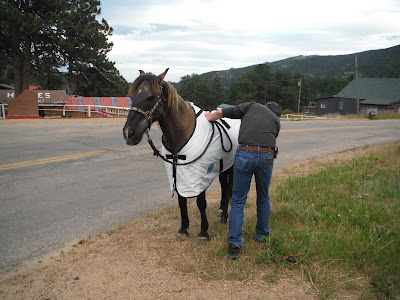 R-  I sayed I DO NOT LIKE THIS DRESS BEEL. 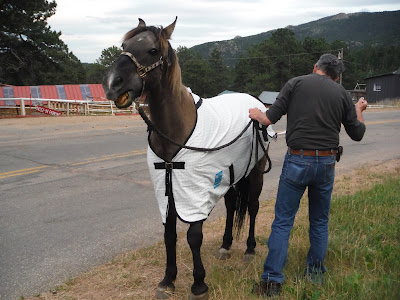