It is with a heavy heart I find myself telling you that Ranger Mustang is dead.

Ranger had been part of my life since just before the turn of the century.  He was bought on December 28, 1999.  That was the day that Clayton Moore died.  Moore played the "Lone Ranger" on the old TV show, and that's how my Ranger got his name. (I thought Clayton would be a terrible name for a horse.)

The BLM guessed his birth year at 1991, but all of the vets we had "toothed" him as 3 to 5 years older.  So we figure he was about 12 years old when we got him.  That's pretty old to be starting an untrained horse. Particularly one that was still just about completely wild.  He didn't trust people AT ALL.

It was a long haul in training.  I probably learned more from him than he learned from me.  I tell people that "I can't be taught, but I can be trained.  There just need to be consequences."  Well, if I did something he didn't understand, or just didn't like, he would consequence the hell out of me.

We did finally reach an understanding.  Ranger is the only horse I have ever had talk to me.  He didn't usually say much, but it was pretty obvious what he had in mind.

Last month Juanita and I took our horses down to winter pasture to run loose for a few months as we do nearly every year.  It's good for the horses' attitudes having time off.  We try to check on them at least once a week or so just to see how they are doing, and get our horse fix.  Yesterday we went down the mountain to check on them.  All of the horses ran up to see what treats we might have brought.  All of the horses but one.

A short search of the pasture turned up Ranger.  He was down.  He appeared to have been down for quite a while, and the grass around him was scarred in a circle around him, probably from him trying to get up.

He was unable to raise his head.

I spent about 5 hours with him, while Juanita made the hour drive up to the lodge and back to get water and a turkey baster to get it into him.  Juanita made the trip again for more water, other supplies, and a short bucket for Ranger to drink out of.

He couldn't raise his head.

It has never been that hard for me to pull a trigger.

Gallop across that bridge, my friend.  You were loved. 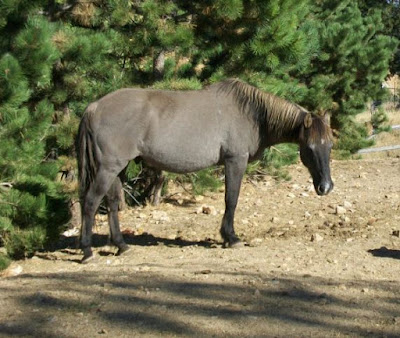