In the hot time of the year Beel and Waneeta do not take us horses for many walks.  I think they do not visit with us much because there are many people visiting them in the people barn.  That is good.  Because it is hot.

On a day some days ago Beel wented to me and sayed "Hey Buddy!  We're taking some time off and going camping!"  He was very excited.  I thinked maybe cam-ping is a scary thing.

We wented past the cons-truck-shun workers that were making big holes by the road and moving pipe monsters.  Beel and Waneeta talked to them and then we wented away.  In the rolling shed.  With my hay.

We drived for many times.  Then we gotted to the cam-ping place.  Beel and Waneeta put up the little fence with the biting wire and let us not be in the rolling shed anymore.

It was not good.

There was not enough grass for me.  And That Mare and The Kid were eating it.  Definitely not good.

But then Waneeta   gived me hay in the tangled rope and that was good.  She also gived hay to the other horses.  Then Beel and Waneeta gived me water.  That was good. 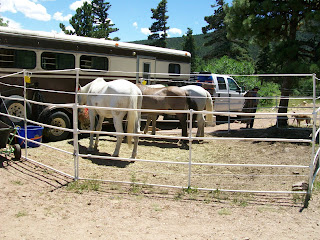 The Kid and That Mare and me fighted with the hay brick for many times.   It wented everywhere on the ground when we broke it.  Very good.  We banged on the rolling shed all night so Beel and Waneeta would know where we were and not worry.  All night.

When the sun was here again Beel and Waneeta getted out of the rolling shed and sitted there.  They drinked some cough-fee.  But mostly they just sitted there.

When the sun was hot they tooked us for a walk.  We the horses walked.  Beel and Waneeta just sitted on us. I only getted a little tired. 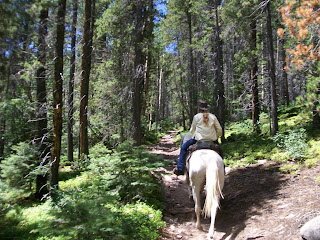 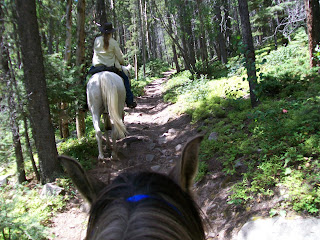 Then we eated grass.  That was good.  Beel just sitted there. 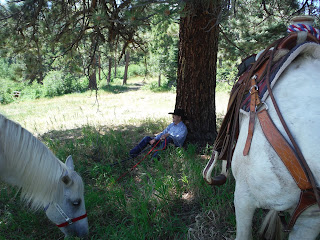 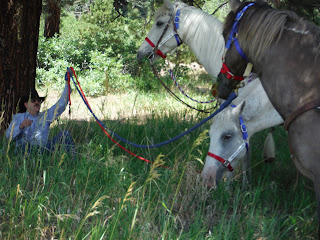 At the not so hot time Beel and Waneeta went away. Beel sayed "We're walking to have dinner at the restaurant a half mile away with a couple friends.  Be good!"   At almost dark they getted back.  Then they sitted.  Then they wented to bed.

Finally they getted up and putted the biting fence away and putted us the horses back into the rolling shed and we wented home.  I had hay.  That was good.

When we getted home I sawed that the holes were gone but the pipe monsters were crouching under the dirt. I will need to look at those more later.

My peoples talked to the cons-truck-shun workers.  "Looks good!  Those culverts should last a hundred years." And "Yup, we had a very relaxing trip."

I feel very bad for Beel and Waneeta.  They could not have had a good time on this cam-ping trip.

They never eated any hay.

Granddaughter Autobot and I decided to go for a quick, short ride this afternoon.  A few weeks ago I had purchased a "slick and easy" grooming stone for the horses to help get dried grit off them.  Autobot used it on the grays while I finished some stuff in the office, then we hooked their reins to the sides of their halters, threw on the sheepskins that we use to ride bareback and headed out for the 1 1/2 mile loop through what we call town, trying to beat an incoming rain cloud.  Just a few yards down the road, Washoe spotted the big cement pipes that had been delivered this morning to the field across the road.  Head went up, butt scooted under as he shot forward and - I came off.  That stone really did slick up his back and the sheepskin underside is shiny from lots of use.  I felt it start to slide and grabbed for mane, which I had very nicely used detangler on and could not hang on to.  It slid right through my hand like it was greased.  Autobot was behind me on Jesse, both hanging out while grandma picked herself up off the ground.  At least I had a sheepskin to land on. 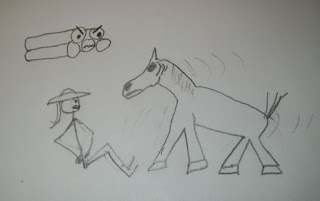 I walked Washoe over to the pipes, had him touch them to see they were not monsters, took him back to the mounting block and we started over.  Very pleasant ride until we got to the last half mile.  We came down the hill, around the corner and up went the giraffe head again.  Llamas!  Now, these grays are used to llamas, but he quickly noticed there was no fence between us and the seven llamas grazing the big corner pasture.  Feet frozen to the ground, undecided what to do.  Then Jesse walks by, nudging him with her nose (wimp) like it was an every day event, so on we went.

As if that was not enough, a little further along the road we heard this weird rattling and rumbling coming up behind us.  Looked back and saw two trollie cars
loaded with people for a special event at the local 5-star restaurant.  Wow!  Rode into a driveway and watched them go by as the horses grazed on the knee high grass there.  What next?  We rode past the trollies as the people unloaded and headed up the final hill for home.  At least neither horse was bothered by the odd looking contraptions.

Of course, this being Friday, the local 'Friday afternoon club' was in top form as we topped the hill; a lot of people outside the local wood working shop enjoying a cool one or two.  By this time the horses were in parade mode with cars lined up on both sides of the road and people hollering and waving at them; nothing was going to bother them.

We got home, put them away and went into the lodge.  When I asked Bill if our hikers had gotten to the pizzaria for dinner, he said, "Yep, and they got to see someone fall off a horse."  I'm not sure if they recognized that person as one of their hosts, but glad I could offer some entertainment.
Bionic Cowgirl
Posted by Allenspark Lodge at 9:42 PM 3 comments:

Yesterday Juanita and I got to do the "go to town for supplies" run together.  That is very unusual for this time of year, and was a welcome break from the day to day stuff of running the lodge.

We went to Ft. Collins to visit her mom, who took us out to lunch at "Vern's", just north of town.  A restaurant/cafe/truck stop that has been around for many, many years.  Always good food.

When we walked in, I saw on the specials board that they were serving a "CFS Burger with Bacon and Cajun Mayo".

Okay, I thought.  Bacon and Cajun.  What could possibly go wrong.

As it turns out CFS  is country fried steak.  They battered a hamburger, deep fried it until it was extra crispy,  smothered it in crushed crispy bacon bits, and slathered it with a Cajun spiced mayonnaise.  Served with french fries.

That may have been the best burger I have ever had!!!

I rarely go into the kitchen uninvited.  (It's against health code rules and such).  But I couldn't help myself.  I thanked the cooks, and told them that was the best burger EVAH!

Sitting here this morning, I can still feel my arteries clogging and my cholesterol level must be approaching 1000.

But it was so worth it. 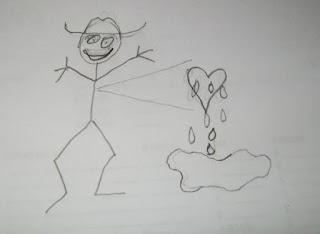 Bill
Posted by Allenspark Lodge at 10:30 AM 5 comments: