There is a new guy in my herd.  Beel says it is okay for him to stay with me and eat the food we have.  There seems to be enough food so I think it is okay for now.

When food comes the "Al"-ish will wait nicely until I have started eating.  Then he will come and ask nicely if he can eat with me.  That is the way it should be.  I do not bite or kick him much because he is good.  "That Mare" will also let the "Al"-it eat with her sometimes  Because he is poe-light.  And he asks nicely.  "The Kid" is not nice to the "Al"-horse even when the "Al"-guy is nice..  Beel says that is because The Kid is a jerk.

On one day Beel did come out and he sitted on my back and I walked around.  The "Al"-boy was very confused and followed Beel and me for a while.  It was good for Beel to sit on my back because I am Beels horse and that is the way it should be.  Beel sayed I looked very smug when he gotted off my back.  I think "smug" must mean handsome.

On this day Beel and the little person Beel calls Spring or Fall or Summer or something camed to us and putted head ropes on all of us the horses.  Winter putted a back chair on The Kid and Beel putted a back chair on me.  Then the Fall girl sitted on The Kid and dragged That Mare and Beel sitted on me and I dragged the Al-low.  We dragged all of the other horses around for some time.  Then we wented home.  Every one was nice and quiet and nobody bited or kicked or nothing.  I am very good at the training. Beel was very happy and I was happy too. 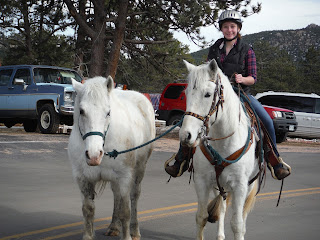 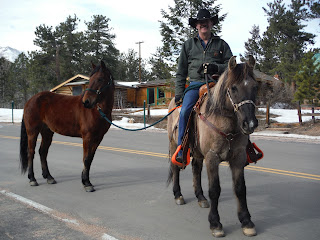 And that is the way it should be.

Ranger the horse.
Posted by Allenspark Lodge at 6:25 PM 3 comments:

We have now had Alloy integrated into the herd for a couple of weeks; a necessity made by the weather gods.  We kept getting 6 - 12" dumps of snow, which made his little pen nearly impassible.  He was only being kept in it at night, anyway, so he wouldn't go wandering off over the now very short fences looking for human contact.  He is such a people horse!
Our outside water faucet froze so instead of stringing 125 ft. of hose to fill the heated water tank, we had to do some bucket patrol.  That's always fun! 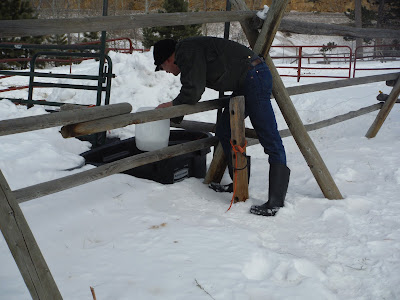 After this picture was taken, we had another 8 in. of snow, so it came right up to the top rim of the tank.  We had to keep shoveling the path to it so the horses could get a drink without getting on their knees to reach the water when it would get lower.  To them, it was simpler to just eat snow according to Ranger.

We noticed the herd getting a little on the bored side, so we added some rocks to an empty milk jug and took it out for entertainment.  They loved to play with this at the 'cousins' house'.  Just like little children, the same toy was not interesting at home. 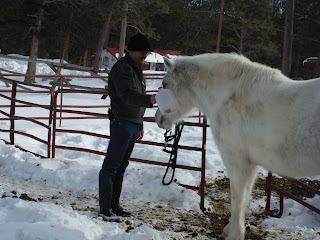 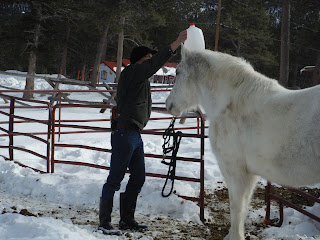 So maybe a little lesson time instead?  Such as how to properly stand still when someone is leaning on your back.

Bill quickly learned it was best to spend time with Ranger whenever he spent time with Alloy, or there would be a price to pay.  I just laugh a lot because I've had that issue with my grays for 14 years now.