It's been a good week so far.

We have done a "soft opening" to see how our Covid-19 plan of operation will work.  I think we have got this.  Mostly.

We had a single guest in the other day (a hiker), and just a couple minutes before the food was going to hit the table, we got a call from a neighbor.  "My horse is STUCK!  She can't move her front feet!  Can one of you come and help?  We may need to call a veterinarian!"  Juanita stayed to eat with our guest, and I drove over to the neighbors place a couple miles down the road.

There were 3 people standing by the horse, looking worried.  The horse was standing on the hillside, weaving back and forth.  It's flanks were drawn in, and it was quivering slightly with its' lips slightly pursed and a distant look in its' eyes. 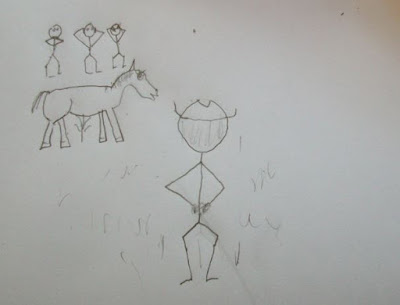 I looked under the animal, and there was a small aspen sapling rubbing the horses' belly.  Apparently in JUST the right spot.  I could almost hear the horse saying "Feels! So! Good!"

I showed the horse a halter and asked "Boots, do you need to work a little?"  And the horse took off like a shot and galloped UP and DOWN the pasture.  WHEEE!!!

"Your horse is fine,   Just had an itch."  I got back in time to eat breakfast.

I fenced in the wood shed and installed a screen door on it so the young chickens can get out of the livestock tank that has been their home for the last couple weeks, and they can look out at the two BIG chickens running around it the chicken yard.  Everyone seems to be happily ignoring one another. 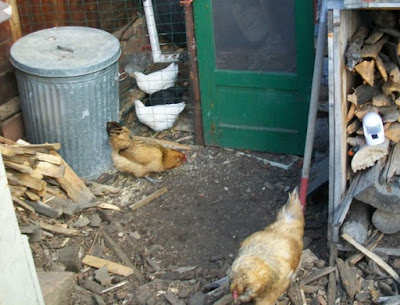 We also fenced in the back yard with a hot wire so the horses can go out and mow for us for a half hour each day.  They seem to like it, and I do not like mowing, so it's a win/win. 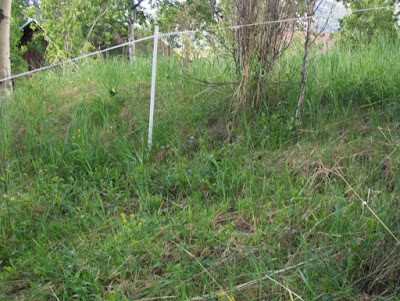 Our youngest son (The 40 year old.  Jeeze.) came up the mountain on his motorcycle and helped us take down a couple standing dead trees out back.  He got some training at that back in the day when he was a wild-fire fighter.  No building or power lines were damaged during the process.  Another win.

We left one dead tree up that had some holes in it that the birds might be nesting in.  The kid told me "You might want to take it down anyway, it's on it's way out...". but I didn't want to bug the tenants.

It fell over the next day in a wind storm.

I had to cut it up without the kid's help.  Rats.  But Juanita was around so I chainsawed it up and she hauled off the logs.

"Bill." she says "You need to come look at this."  She pointed down at one of the holes in the sawed up tree.  It was stuffed with Oreo Cookies.  It was probably 15 feet up when the tree was standing  Must have been one TALL Keebler elf to fill that hollow tree. 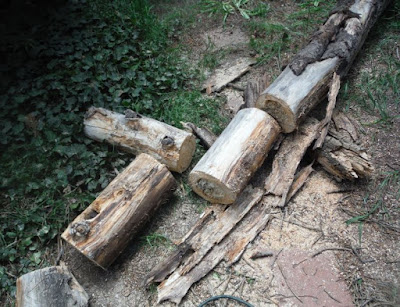 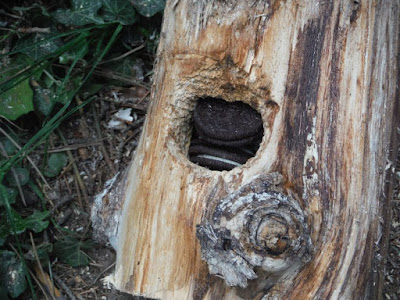 Juanita and I were inside doing chores when Reba the Lodge Dog barked.  Again?!?  That's the second time this week!  What is it this time, dog?  A homeless guy?  A bear?  Uh, no.  Remember when I talked about the horses mowing for us?  Well, Washoe the horse had wandered onto the back porch,  Reba was incensed.  It's her porch, don't you know.

So, we are back up and running now, on a limited basis.  Full social distancing and masked like bandits in the common areas.  You should come and visit! 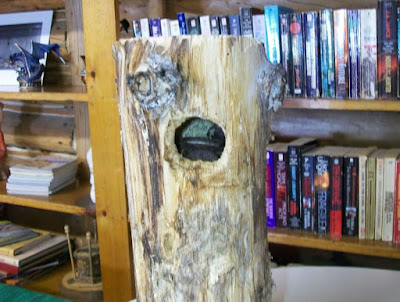 Posted by Allenspark Lodge at 11:10 AM