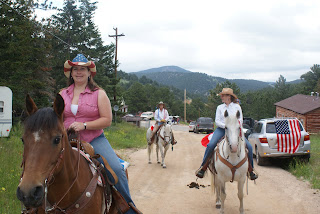 The annual 4th of July Parade was, again, a blast. This year, our friend Dawn joined us on Washoe. All of the horses did very well with the chaos of the parade. Jesse pitched a bit of a fit at about the half-way mark, but Mom was able to bring her back under control until the end of the parade. However, at the end of the parade, when the Meeker Park crew was loading up their horses, Jesse LOST it. Mom's pretty sure that the MP trailer sounded a whole lot like a wagon, which Jesse HATES and is terrified of. Could be, who knows? We do know that once the horses were loaded up and the truck/trailer passed us, Jesse calmed right down. Maybe Mom's right.

Posted by Allenspark Lodge at 9:08 PM