It's Not As Good As It Sounds.

Today we had our lodge's hay-day.

Not to be confused with a heyday.

Our hay supplier, a wonderful 70+ year old farmer, brought up six tons of hay at 4:30 am this morning from his farm in Nebraska.  After a short nap and a cup of coffee, he was ready to start unloading hay.

This year, we bought 6 tons from him, because we only have 3 horses to feed, and a lead on some winter pasture we should be able to turn them loose on for 4 months or so.  Shouldn't need quite so much food so we didn't ask for the usual 7 1/2 tons.  And that's a darn good thing.  Because in years past, we've always managed to get two or three of our kids/in-laws/young friends up here to help unload and stack the stuff.

One would think we would be delighted that all of ours are gainfully and fully employed.  And usually we are VERY grateful.

Unless, of course, we have tons of hay to take off a truck and have to do it on a weekday, 'cause we're busy on weekends with guests.  Then, a little unemployment seems like a good thing.

Juanita, the 70+ year old hay farmer, and I worked at unloading the hay from the trailer and stacking it, in front of a VERY attentive audience.  Three starving horses, who spent their time muh-muh-muhing at us until Juanita raked up some of the loose stuff for them to snack on.  They still kept an eye on us, but it's hard to nicker with your mouth full.

They approved of this years crop. 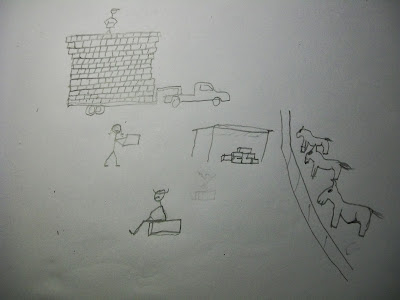 The weather was nice, so we have put off tarping the stuff that is not in a shed until tomorrow.  Hopefully there won't be as much wind as there was today.  Big tarps are...awkward in the wind.

After the hay was unloaded, and the hay-guy drove away, I got to thinking.

Today is Veteran's Day.  Every one of those kids was probably off work.

(Happy Veterans Day, and my thanks to all who served.)


Posted by Allenspark Lodge at 6:18 PM