Yesterday we took the horses out for a picnic ride.  Ranger did quite well the whole way (whew).

As we were coming back and crossed the road by the horses' corral, we noticed that the choke cherries were fully ripe, and discussed coming back and picking some to make jam.  We marveled that nothing had eaten them yet...

Feeding last night was going along normally.  The horses had their feed; the hay bag was out.  It was quiet and I was enjoying listening to contented chomping sounds.  Then I noticed another sound; the llamas were clacking.  They quack kind of like ducks when something excites them.  I started walking over toward their pen at the opposite side of our corral, thinking they had spotted coyotes on the trail across the road.  That was holding their attention.  Standing there staring at the trail a motion caught my eye - much closer than the trail.  A bear was stripping the choke cherries off our bushes maybe 20 yards from the llama pen!

Washoe had quit eating and followed me over to the fence.  I pointed at the bear to show him and he was so excited he was running up and down the fence trying to get closer.  I think he thought it was a big dog that did not belong and had plans to run it off.  (He's my dog chaser.) 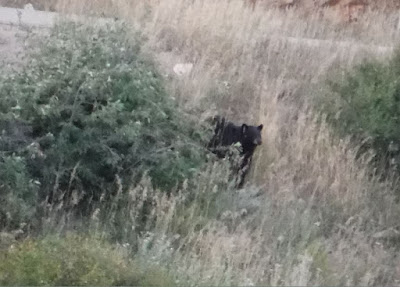 I finally went back up the hill to get Bill, hoping the bear would still be there when we got back.  We watched it until it was almost too dark to see it.  After Bill came over, Ranger stood near the feeder and snorted; Jesse wouldn't even raise her head out of the food.  Gotta love living in the mountains.
The llamas spent almost all of their time running back and forth at the fence line closest to the bear.   Quacking.