A Dark and Stormy Night

A gentle snow was falling, the clouds obscuring the full moon.  The wind was blowing, howling at times, dead calm the next moment.  No problem, Juanita was out feeding the horses and I was inside the lodge getting ready to fix dinner.  I took a moment for a quick trip to the restroom and just as I closed the door Juanita hollered at me from the front door.

"Which horse?"  I asked as I was putting on my insulated boots.  The look on her face explained what a stupid question that was.  "Oh.  Alloy." I said.

We had just spent some time introducing Alloy the mustang to the rest of our herd.  As we had 3 other mustangs that have pretty good manners when meeting new horses, Alloys introduction went very well.  We took the other horses back to their pen, and left Alloy in his.  We were going to spend a little more time the next day getting them all used to each other.

Alloy took offense.  He had a new herd now, and they were gone.  It was obviously up to him to go find them.

The deep snow had made the fence and gates less effective, so he squashed a gate and got out.

Juanita and I split up and followed his tracks around the nearby fields.  The snow was deep.  We had had almost 3 feet of snow with temperatures well below zero degrees F.  Then a day of rain, which crusted the layer of snow.  Then we had another foot or two of snow on top of that.  One would be shuffling along in knee deep snow, and then break through to crotch deep.  I MUST get my snow shoes repaired.

We spent 20 minutes following his looping tracks that finally lead out to the plowed road and off to parts unknown.  He had about an hour head start on us so I went back to start up the pickup truck.  It has 4 wheel drive which I figured would be a good thing.

As Juanita was following the hoof prints left on the skiff of snow on the road, a sheriff's car passed.  Juanita flagged him down with the halter she was carrying.  Sheriff's Deputy Dan rolled his window down and asked her "You looking for a horse?"  She said "Yes I am!"  He told her that he had gotten a call from one of the volunteer firemen in the area about a loose horse heading into Rocky Mountain National Park, a couple miles down the highway from us.  He had tracked it into an area that was too deep to drive through, so he came back to town, and saw her.  I drove up in the truck after he finished talking to Juanita and had headed down the hill and he told me the same tale.  I headed up the hill and picked Juanita up and we headed toward the Copeland Lake area where he had been spotted.

We kept getting out of the truck and following the tracks whenever Alloy left the road.  He would loop out through the deep snow, and then head back to the road.  What a jerk.  He finally decided to stick to the road.  Deputy Dan drove back toward us and said he had found a new set of foot prints on the road another mile or 2 to the north that hadn't been there last time he drove by.

I got really excited and turned the truck around on the narrow dirt road.  About half way turned around.  I'm not sure I've been THAT stuck since I was a teenager.  Deputy Dan drove back and pulled me out.  (Thanks Dan.  I owe you for that.)

We went another mile down the road and the hoof prints lead up someones drive and right by their front door.  But he didn't stop, he just went cross country again.  Jerk.  So I followed him on foot.  I've REALLY got to get those snowshoes fixed.

Alloy found another road after a million miles of cross country in deep snow and went up it.  WAY up the little dirt road. After a half mile or so, the tracks started looking fresh.  Soon the tracks were fresh, and left by a running horse.

He was probably only a hundred yards or so ahead of me, and running away.

I started talking softly and calmly.

"Alloy, come on back here.  Just stand where you are for a moment so I can catch you and take you to the rendering plant and feed all of the good dogs in Colorado with your useless carcass."

I rounded another curve on the road, and there he was.  Just standing there like a good boy.

Now you may have noticed that I have talked about Juanita having a halter, but not talked about me having one.  It was still in the truck.  With Juanita.  Miles from me.

So, I took off my belt, wrapped it around his neck (barely reaches) and started leading him back down the hill to the highway.  I met Deputy Dan about halfway back, and he drove off to meet Juanita and tell her where we were.  She brought a halter.

Now, our horse trailer had been snowed in, so the only way to get him home was to walk.

So I walked him home on the side of the highway, three and a half miles on the slick, ice glazed pavement of the highway.  Alloy and I walking, Juanita following in the truck, with Deputy Dan bringing up the rear.  Looks like we got us a convoy.  Alloy was behaving and leading perfectly.  He would only jump a little when a snowplow went by, or a truck with chains.

But evey time we passed a stretch of his footprints by the road, I would point to them and say to Alloy-

We got home, put Alloy in the horse trailer as a box stall to keep him warm, thanked Deputy Dan for his (over and above) help, and went to bed thinking "Tomorrow is another day."

Then I got to pee. 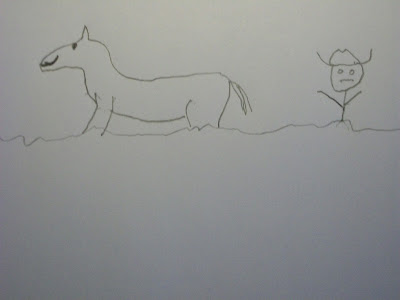 Posted by Allenspark Lodge at 10:54 AM