Last week we had a guest park his motorcycle next to the lodge where no one had parked a big bike before, and it startled my horse. Ranger smudged the saddle bags.

My mustang, Ranger, spent the first 8 or 9 years of his life running wild in northwestern Nevada. He had very little contact with people or people's "things". Then came the round-up (or "gather") and all of that changed. Helicopters, trucks, trailers, fences and pens, and people. Scary, rude people with ropes and squeeze pens and needles and sharp knives that they use to... well, as a long term stallion, I'm sure he didn't care for that too much. All things people related were bad things. 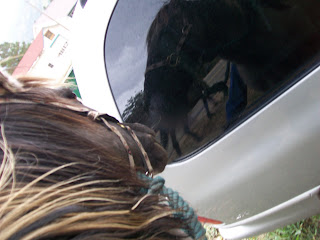 I got Ranger 1 year after his original adoption, just the minute the cowboy that got him could unload him (you must keep a BLM mustang for one year after adopting before you get title and can sell him). The horse still hadn't gotten over his fear of "people stuff", and in fact, may have gotten worse about it. During his first year of living around people he had mastered the art of "rearing and striking" to chase people off. A VERY effective technique. He spent a lot of time being left the heck alone.

The first 6-8 months we had our new-old mustangs (my wife, Juanita and I both got our mustangs at the same time), we tried the "sack 'em out" method of desensitizing the animals. You subject the horse to close contact with whatever bothers them, in the hope that they will realize that it actually isn't hurting them. With these older mustangs, all it did was convince them that "people aren't to be trusted, they just want to torture you". Months of little to no progress left us looking for other techniques. Juanita heard an ad on the radio for a BLM adoption that had trainers in attendance to help with the training. We attended several training sessions and came away with the understanding that there are other, better ways of going about training mustangs. Clicker training was one of those ways. 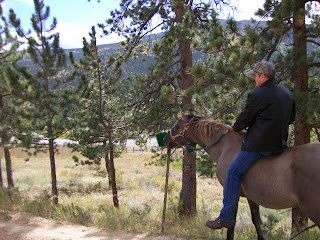 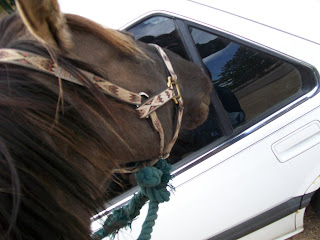 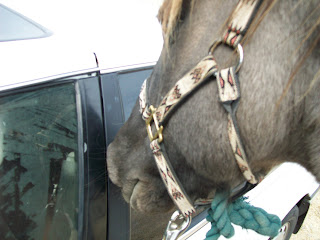 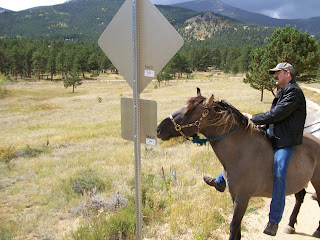 Clicker training is a training method first used on animals you can't use regular training techniques with, like dolphins and seals. They will just swim away if you bug them, and most training is pretty bothersome. "Why would I want to do THAT?!?" is the response to most requests. Clicker training is a way to give exact direction to the critter, without needing to touch the animal.
Posted by Allenspark Lodge at 4:25 PM