Yesterday was turnout time - horses went down the road to a winter pasture on Hwy 72.  Now that the tears have quit flowing long enough to type - tears of laughter, not sorrow....  We had five horses to transport and a three horse trailer, so we decided to take Eli, Estes, and Washoe first, then return for Jesse and Ranger.  All the horses were as excited as we were; getting only three out of the pen turned out to be quite a challenge...'cause the other two did NOT want left behind (it's their trailer, you know!)  I explained that we would be back and they were slightly mollified, although when we returned one was standing point-guard at each end of the corral, heads up in alert position, listening for the trailer.  As we pulled in we could hear them start to whinny and true to form, they were waiting at the gate to get haltered.  Loading?  Took about 30 seconds!

I only have a few still shots because I was trying to work GunDiva's Flip camera and Bill had his on video also, but you will get the idea..... 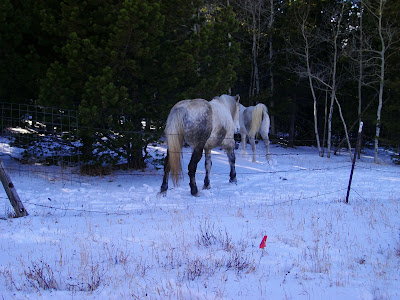 As they were getting unloaded, Washoe immediately took off through the trees, even though he had no clue where he was going - they have never been on this pasture before.
This is a new area to the horses; the rancher who leases it to Ida just wanted the pasture eaten down a bit before next year, so our guys get to spend the next month there, then we will transport them back to the main ranch in mid-December.
As we pulled up with the second load, we couldn't see the first three.  We stopped, started to unload and turned around to find we were being watched.  It was like they had just materialized; they've been watching Harry Potter...(invisibility cloak). 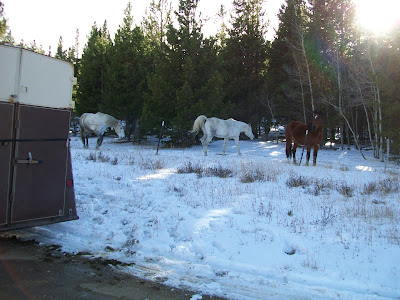 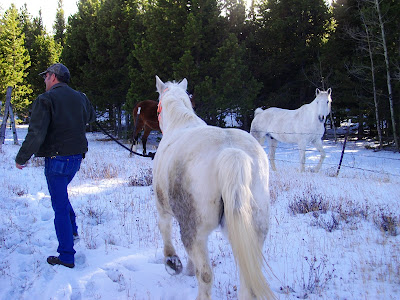 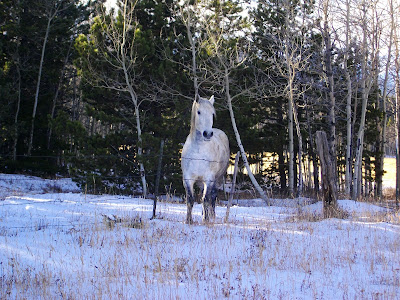 Isn't this a great shot of Eli? 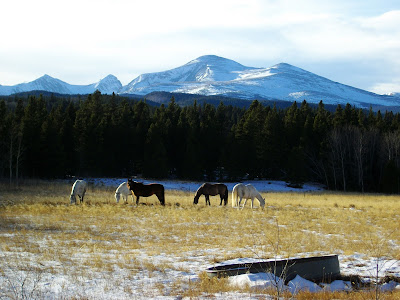 How's this for a backdrop?  That's the Indian Peaks, almost always covered in snow. 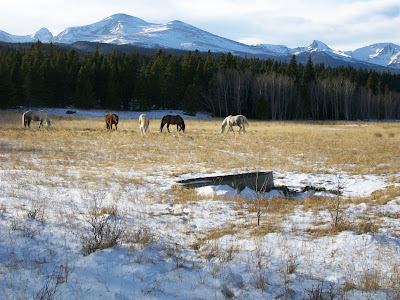 From L to R:  Eli, Estes, Jesse, Ranger, Washoe
If I managed to get the Flip's videos uploaded OK, you should be able to see some fun videos from one of GunDiva's blogs....or maybe Bill can get his posted.  My pics are after the horses settled down!
Juanita
Posted by Allenspark Lodge at 10:09 AM