Juanita and I got a call in the morning.  It was time to move the horses from their early winter pasture up high on the "Peak to Peak" highway down to their lower pasture outside Lyons.  Between the two herds (Ida's and ours), there are thirteen horses.  Too many for any of our trailers, so it took two rigs.

We showed up at the pasture our horses were on, and went out to get them. 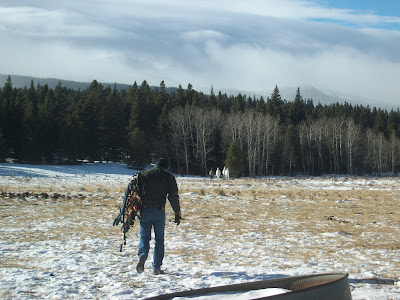 If you click on the pic, you can see them out there
It was 22 degrees out, which is not too bad.  But the wind was blowing a steady 30 mph with gusts to 50, so the gritty old snow was pelting us pretty bad.  I felt like I was standing at the wrong end of a skeet range.  Miserable.  Fortunately, our horses will come to us if we holler and wave, so they came a running. 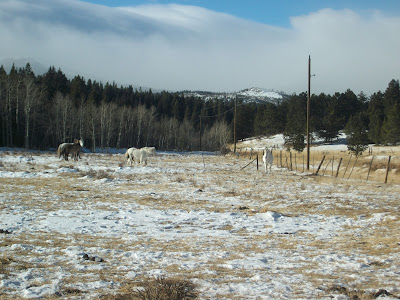 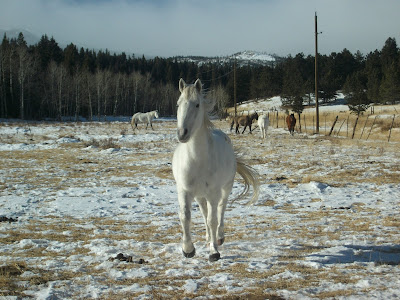 This was the last picture we could take.  The camera froze.

We got our guys loaded without incident, and drive off the half mile down the road to pick up Ida's herd.  They were on a MUCH larger plot of land.  Heavily wooded and steep.  Thousands of acres. Deep snow.  Rats, no horses.

We pulled GunDiva's horse, Estes, out of the trailer and walked her around beside the highway in the hopes that her whinneying would bring the herd in to see what was up.  Too much wind.  Ida asked "Did you bring a bridle?"  We had not, but Juanita suggested that she just ride in a halter.  We do that sometimes when we are being lazy.  Ida jumped on and rode off over the hill and out of sight.  Juanita and I wandered around for 10 minutes or so, occationally hollering for the horses, until we realized we were going to freeze our aspens off and not be able to halter the band when they came in.  We climbed into the truck, and as soon as I started the truck, I saw them coming back over the hill.  Out we jumped, haltered the crew, loaded them into the trailers.  Ida confessed she had never ridden that horse in just a halter before.  She was ALL SMILES!  We drove down the mountain.

By the time we drove down the 3000 or so feet, the wind stopped and the temperature was up to 44 degrees.  The horses thought they were in the Bahamas.  They unloaded, obviously glad to be back in there lower winter digs, and when we last saw them, they were grazing and shuffling up the hill, away from the highway.

No animals or people were killed the the writing of this posting.

Bill
Posted by Allenspark Lodge at 9:51 AM