There they are! I wave frantically, trying to get their attention. They must be a good half mile away, on the next ridge over. Suddenly a gray head comes up, then another, then a red and finally, the whole herd. Watching, watching, analyzing. Soon the gray heads my way, picking up speed and the rest of the herd follows suit. My heart skips a beat as I watch, mesmerized, while my mare heads down that long hill, moving like a dancer over the rough terrain, the shrubs and boulders that jut up from nowhere. As she hits the bottom land, she goes to full speed and soon the whole herd of 13 is galloping my way. 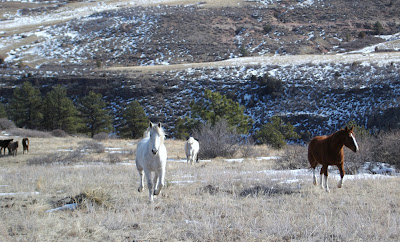 Bill and I had spent a considerable amount of time trying to locate the horses. The day before we had hiked three hours, searching all their normal locations and had ended up going home without seeing them…a first. We were determined to not leave it that way, so that night, while soaking in the hot-tub, my subconscious kept working on where the horses could be. I had been sitting there with my head leaned back, eyes closed, when suddenly, it was like a picture flashing across my sightless eyes, Jesse saying, “We’re here, we’re here!” and I could just picture them grazing in a pasture we had never seen. “I know where they are,” I yelled, causing Bill to jump since he was only three feet from me.

We had already decided to go back the next day, so when we did, I would stop and look out over the ridges in different directions, looking for the ‘scene’ that had popped into my head. After hiking in about an hour, I saw the ‘scene’, looking across to a pasture we had never been to. Sure enough, when we got out the binoculars we spotted what appeared to be animals scattered on a hillside. Hoping it was horses, and not cows, we backtracked down the mountain we were on, crossed a creek and trudged up the next hillside. That took a good hour, only to lose sight of them. We split up and each went a different way around the hilltop in front of us, hoping to not let them slip by us on their way to water. A half hour later, that’s how I ended up in the middle of the mountain pasture. Bill came around his side of the hill, higher than me, in time to see the horses barreling down on me. I don’t think he had quite the same perspective I had…and I couldn’t explain it to him. 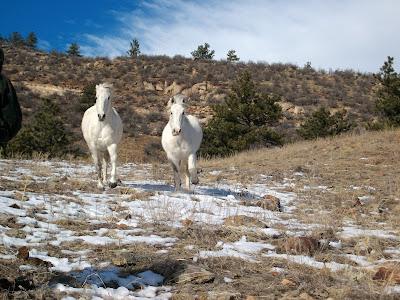 Panic!!! They are stampeding directly toward me and I look around, realizing there is not a single “safe” place I can get to in the amount of time before they get to me. Suddenly, reality hits. So Hollywood! Horses don’t ‘run down’ people when they have plenty of space to choose from! My heart is still racing as I stand my ground and they suddenly slide to a stop, as one, about ten feet in front of me. Then my two grays calmly walk forward for their lovin’ and treats …leaving the others wondering why the rush to get here.
Posted by Allenspark Lodge at 6:51 PM