When we bought the lodge a little over 13 years ago, we remodeled the old grocery store attached to it.  We now call it the "Sun Room" and use it for assorted conferences and craft groups.  Most of the time, these groups are "single sex" getaways-  scrapbooking groups, knitting groups, quilting groups (mostly women).  So with the two restrooms we had in there, quite often there would be a line to the ladies room, even with no other males on the premises. 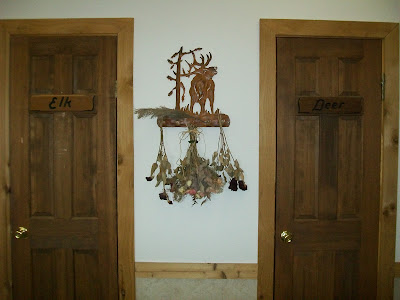 The signs say "Elk" and "Deer"

There are Males and females of each species, so the rest-rooms are now "unisex", right?

If I flip the signs over... 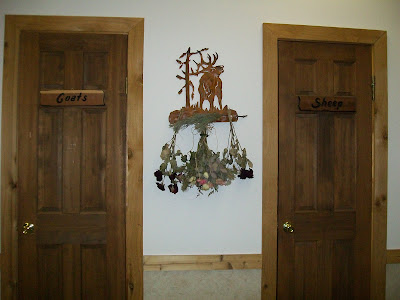 They say "Goats" and "Sheep"

The last couple days, we have had temperatures down to between -26 and -38, depending on which thermometer you believe. This morning the pipes in the walls of these restrooms have frozen and burst, so I had to shut the water off to them.

I think tomorrow I'll need to make up some new signs.

"Grizzly" and "Polar", because until I get the pipes fixed, it's the woods for everyone.

Email ThisBlogThis!Share to TwitterShare to FacebookShare to Pinterest
Labels: plumbing