Yesterday, Bill and I took some personal time.  Yep, even lodge owners occasionally need a getaway.  We live in such beautiful country that we can get pretty 'out-of-synch' if we don't get to see it now and then.  Now those of you who know us - or who know of our business - know it is pretty tough to get a day off during the main season.  We don't have staff; instead we have grandchildren who we use as 'slaves' (although they get paid) on most weekends.  They are a great help ... back on subject:  in order to have time to do something, we really have to close for two days; the first day we cook breakfast and do minor cleanup until guests leave at 11:00 am.  The rest of the day is spent doing chores which cannot be done with guests here.  This time it was replacing a water heater that had gone out last week, doing the normal grocery and banking.  Stuff like that.

The second day, we try to catch up on a little sleep.  However, that didn't happen as a local bear decided he could make an appearance in our parking lot - mainly our own car!  Now I tell people we have the cleanest cars in town because we make sure nobody leaves anything attractive to them in their car - so there have been NO instances of bear problems with guest cars.  Apparently, when we got home from grocery shopping at 9:00 pm, one of us inadvertently left the van slider door open.  We made sure we had all the groceries in; no food was left in the car.  Very early the next morning, one of our hiking guides was knocking on our bedroom door to announce that "something has been in your van; the passenger slider is open and the driver's side door is open - and it's a little messy."  Out of bed early (did I mention wanting to sleep in?). 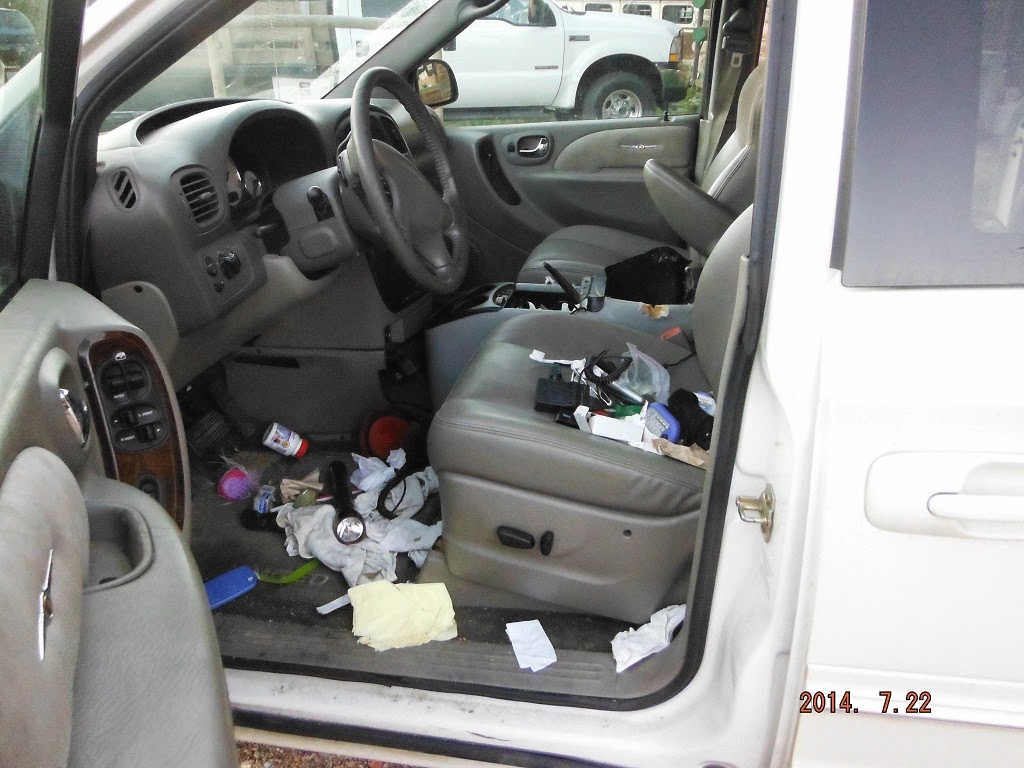 We are assuming it was a bear as nobody actually saw or heard it; this is a pretty normal mess.  It was a kind bear.  It entered through the open slider, checked out the middle consul and exited through the driver's side door.  Now the amazing thing is, we KNOW that door was not left open.  However, there is not a mark, scuff or scratch anywhere on that door.  So ... do our bears now know how to use door handles?  We have decided that we keep entirely too much stuff in that consul:  3 flashlights, 2 pair of winter gloves, way too many napkins, some change, lots of sunglasses, sun screen ... you name it, we probably had it.  We did discover that whatever it was liked 'fruity' antacids, but left behind the normal, minty kind.  It also really liked the toothbrush that was pretty chewed up (maybe remnants of toothpaste on it?).  All in all, we were very lucky and will be much more careful about shutting doors from now on.

So, first order of the day was to pick up this mess.  The plan of the day was to take the horses on a longer ride; maybe head for a lake.  By noon, we were packed up with picnic stuff and on our way.  We chose Finch Lake, a nice little jaunt of 5.4 miles each way at an altitude of about 9,912 ft. (about 1500 ft. elevation gain).  We started out down the road toward the Allenspark Trailhead; I was riding Washoe and ponying Jesse, Bill on Ranger. 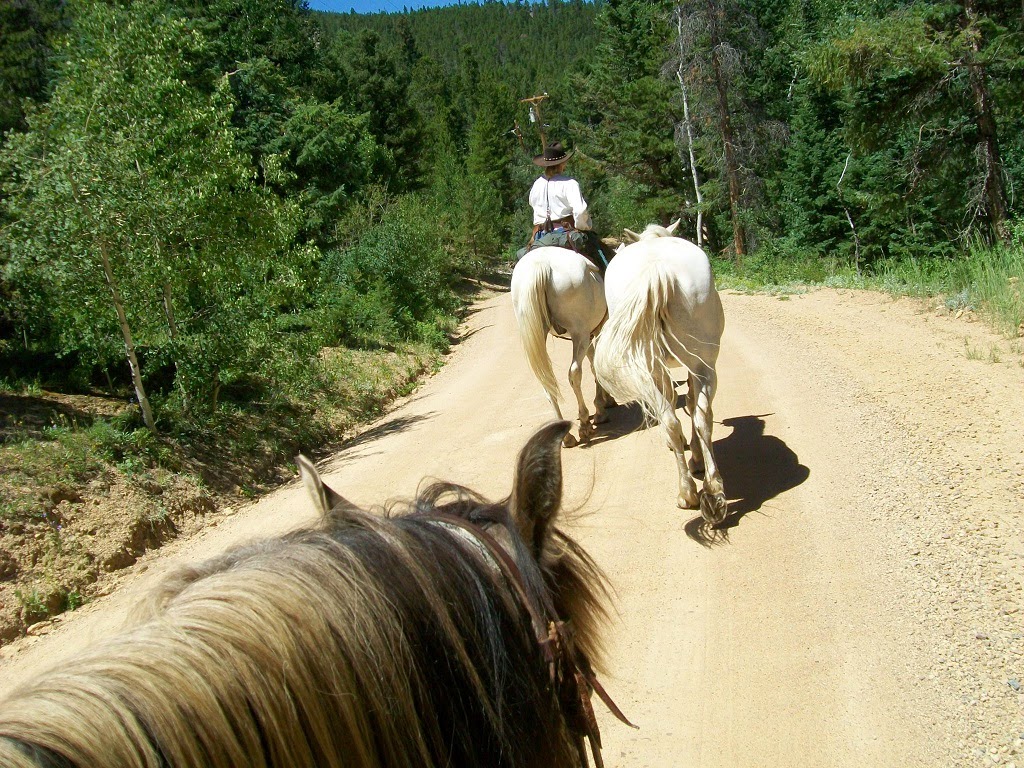 The Allenspark Trail was cool and inviting, but has some challenging spots.  One is a rather steep staircase (not shown) where Bill took over Jesse. 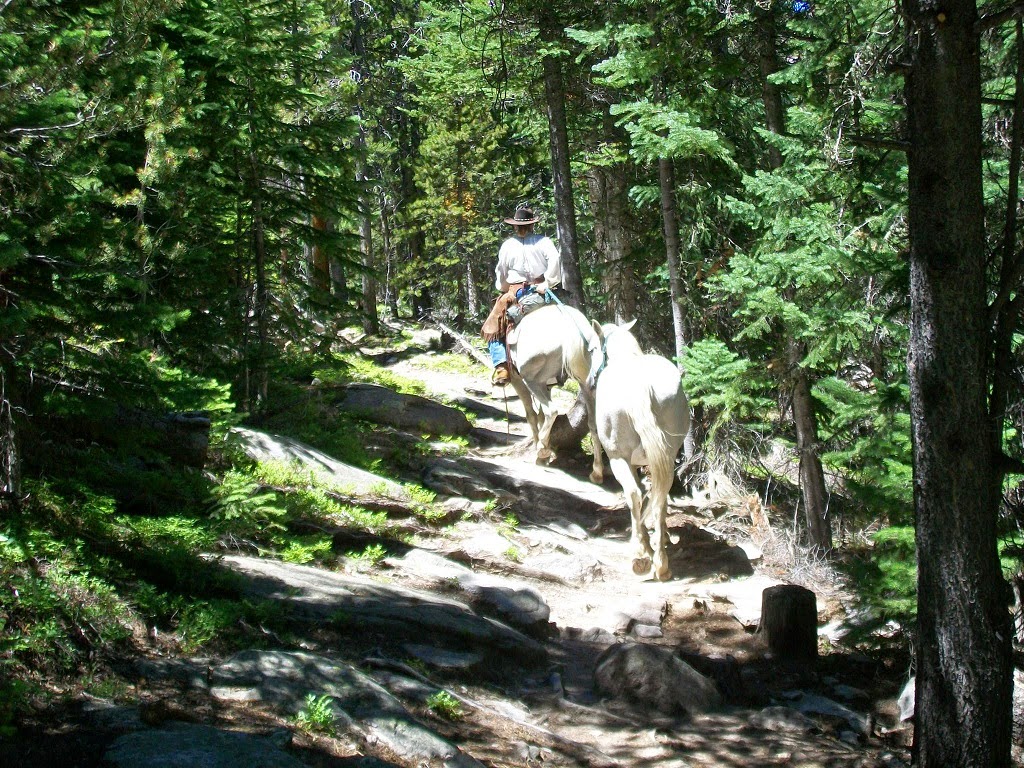 When we got to Confusion Junction, we dismounted to give the horses a break.  We had been riding for about two hours.  The views from this are spectacular. 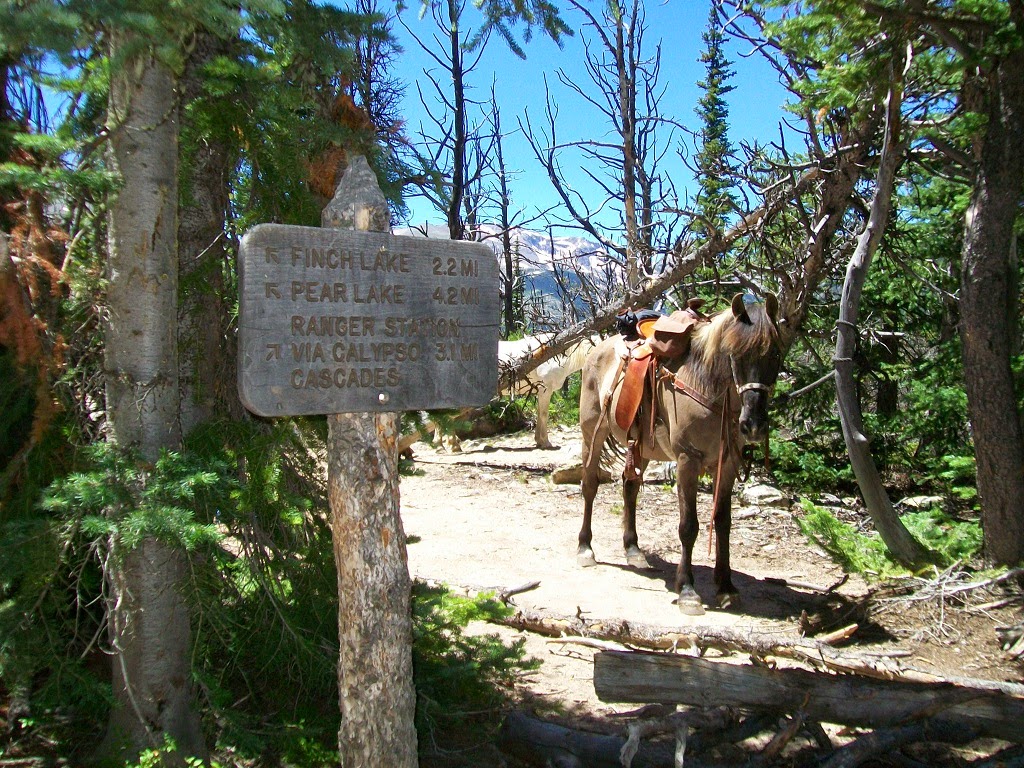 Mounted back up, we headed the last 2.2 miles to the lake.  I had Jesse in tow again as we went through some fantastic country.  We haven't ridden this trail in over six years, so it was a pleasant surprise at how well it had been kept. 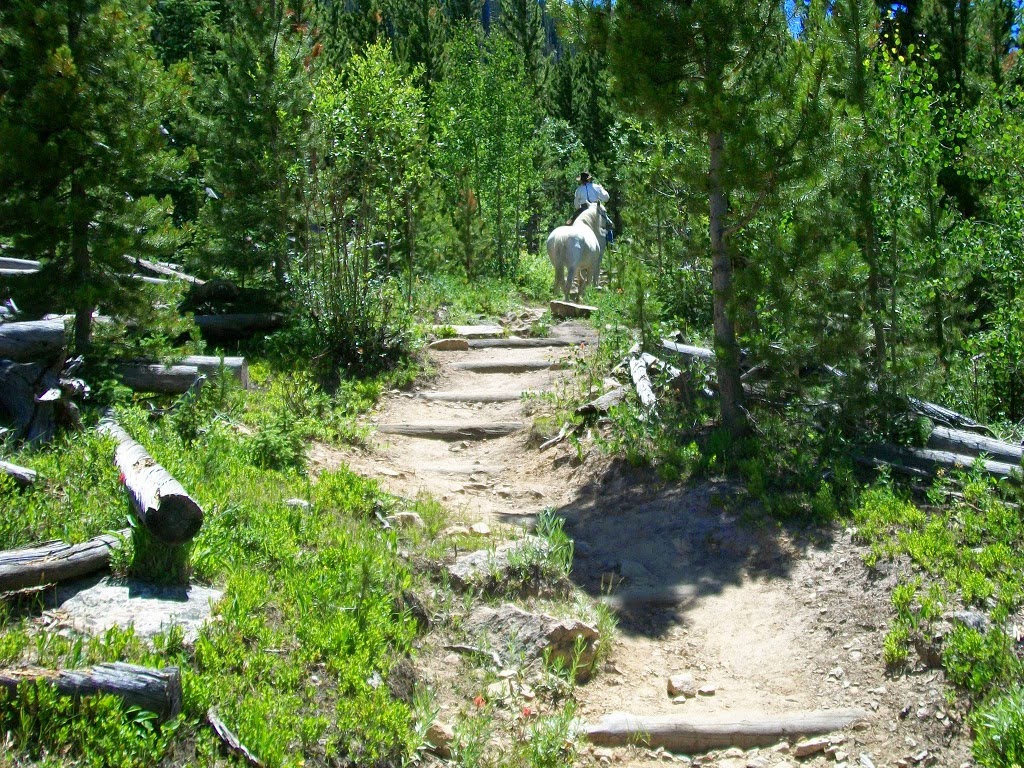 There were a few rocky areas, but our guys handled them with ease, even barefoot. 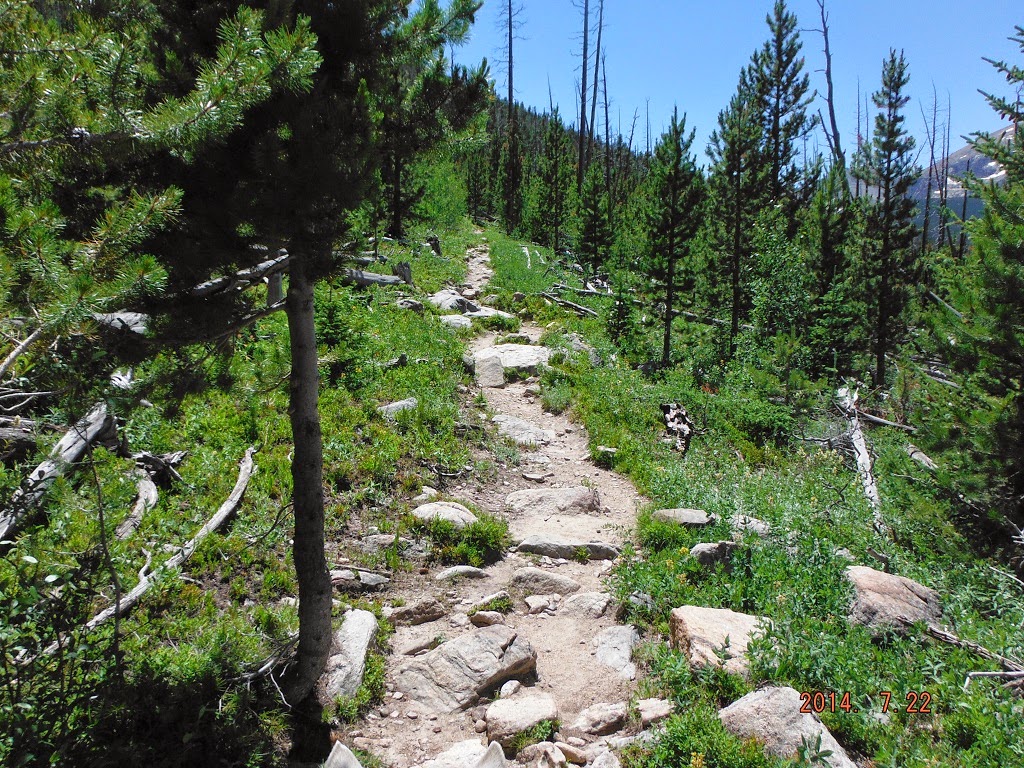 And of course, we have our own version of trail challenges.  I really, really want to try a Competitive Trail competition this fall.  I just don't know if I can get the two grays up to it speed-wise.  The distance would not be a problem, nor the 'challenges'; but we don't do anything 'at speed' with our type of trails and at our altitude. 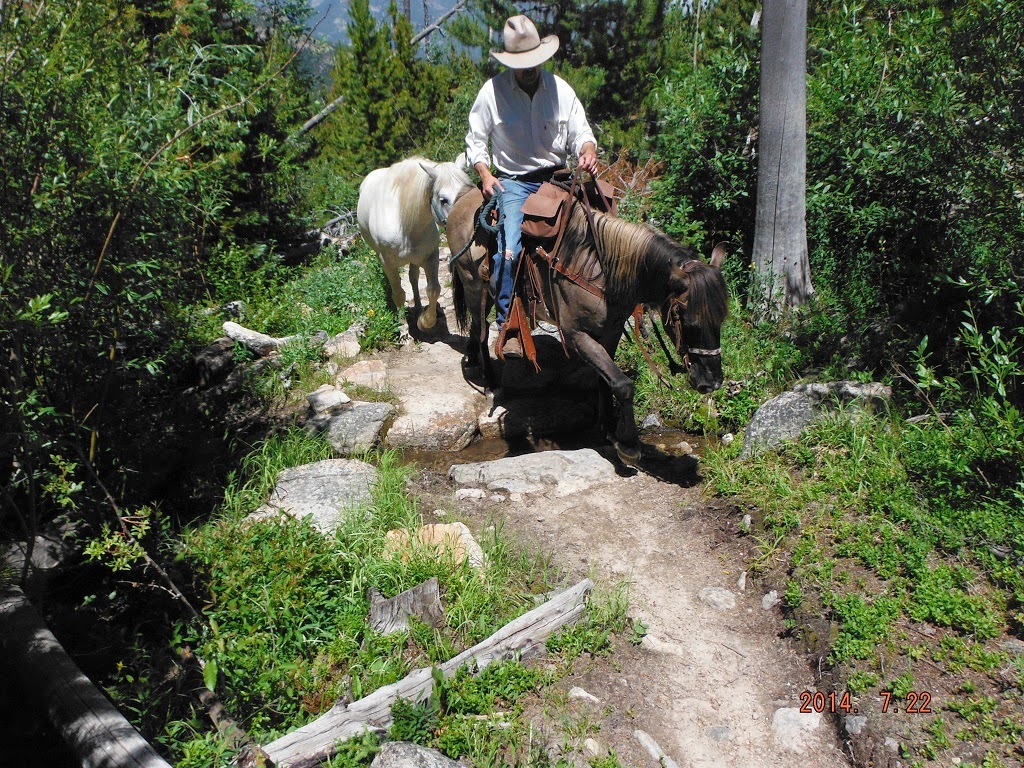 We did have to do a reminder training at a water crossing.  We came upon one of the creeks feeding out of the lake; maybe 10 - 12 ft. wide and about a foot deep, running quite rapidly.  Washoe was pretty sure he didn't want to get his feet wet.  There was a foot-log crossing for people to use, so I dismounted and tried leading him by walking on the log and having him step down into the water.  No go.  So I stepped into the water and then the lightbulb came on and he walked right in behind me.  I stepped back onto the log and finished leading him across.  By that time, Ranger decided he didn't have to; he just plain doesn't do what he calls deep water (over 4 inches).  I tied up Washoe, took Jesse from Bill and proceeded to ask her to cross.  No big deal - except she wanted to use the foot bridge.  Bill said 'no' to that so I asked her take the water route.  (She learned the foot log thing when she was very young.)

Well, Ranger, that leaves you.  After a few stubborn attempts at not getting wet, he decided it was best to follow Beel.  Beel got quite wet as he had to stay in the creek the whole way.  And to make sure, they crossed it several times!  Good thing it was a nice warm day.

An hour after leaving the junction, we arrived at the lake. 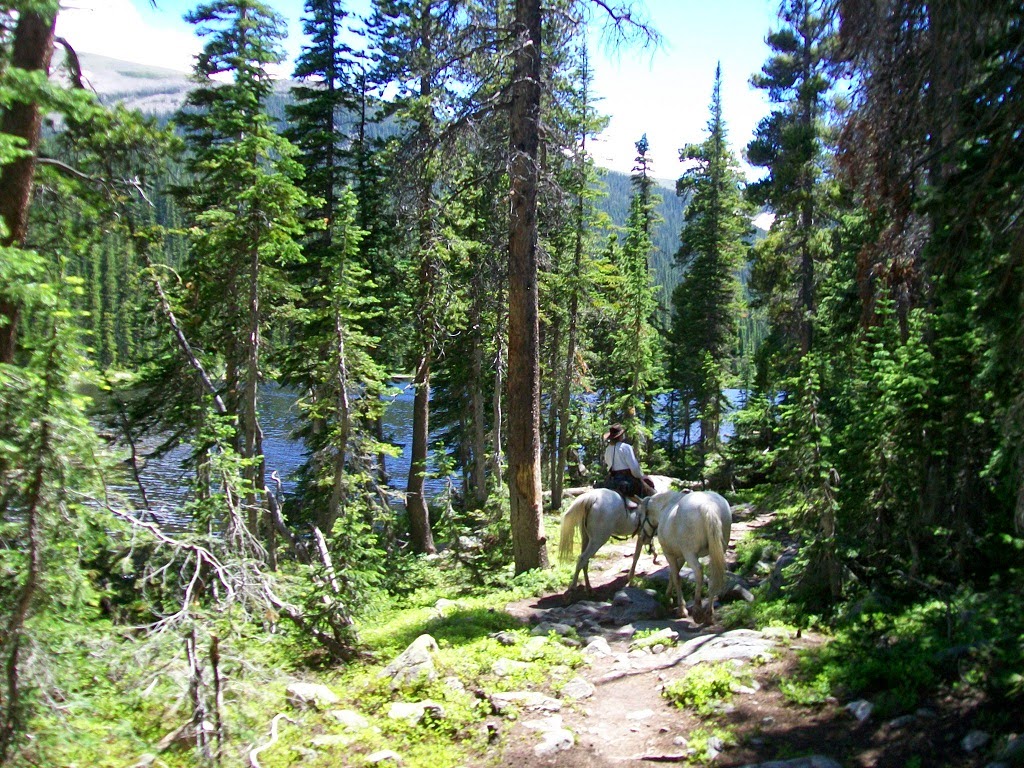 Bill spotted some ducks on his way in.  I totally missed them so I was glad he got some pictures. 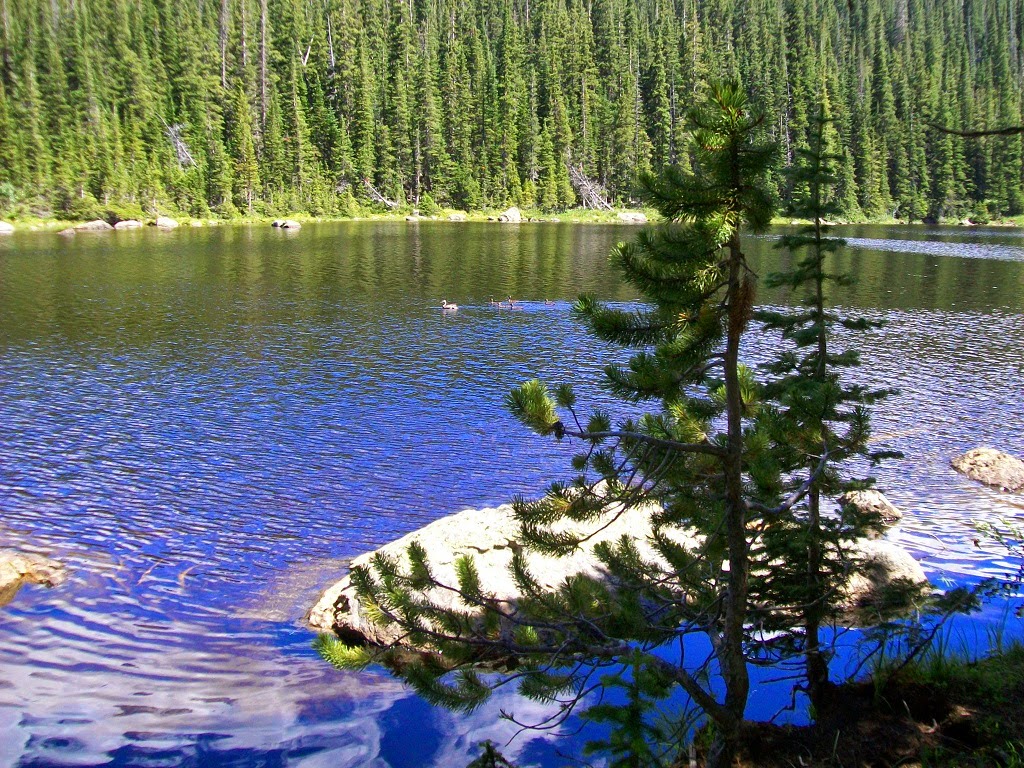 Here's a better picture of the lake, with Copeland Mountain in the background. 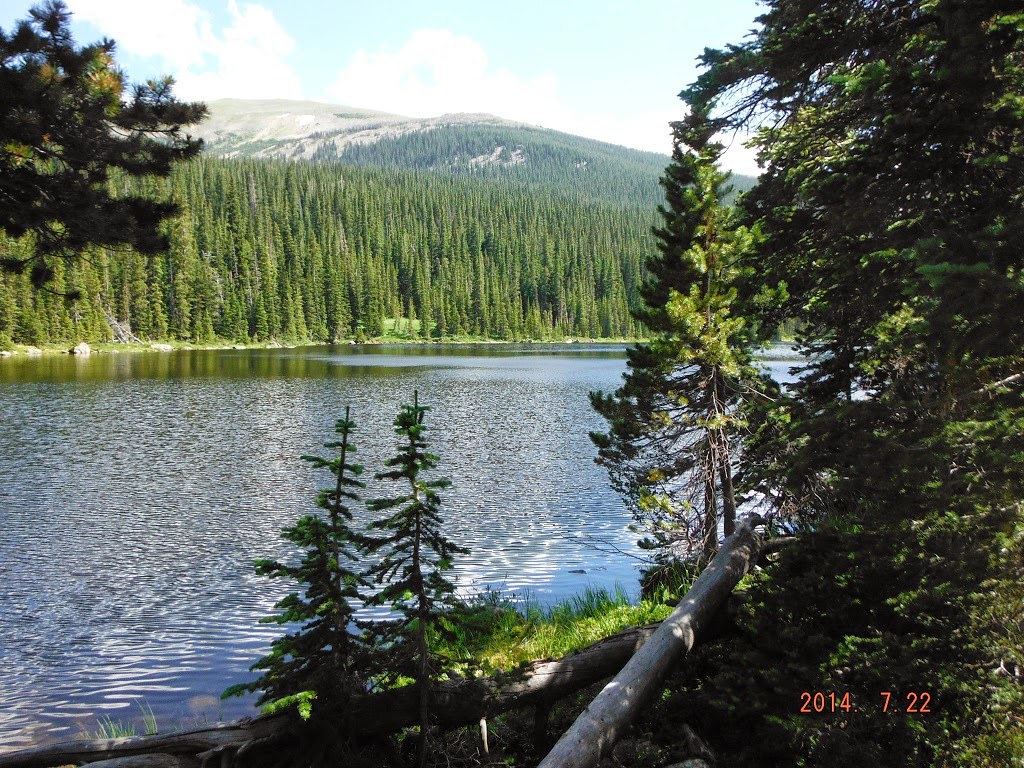 We had a nice picnic sitting on that log in the foreground.  The horses were snoozing at the hitchrack. 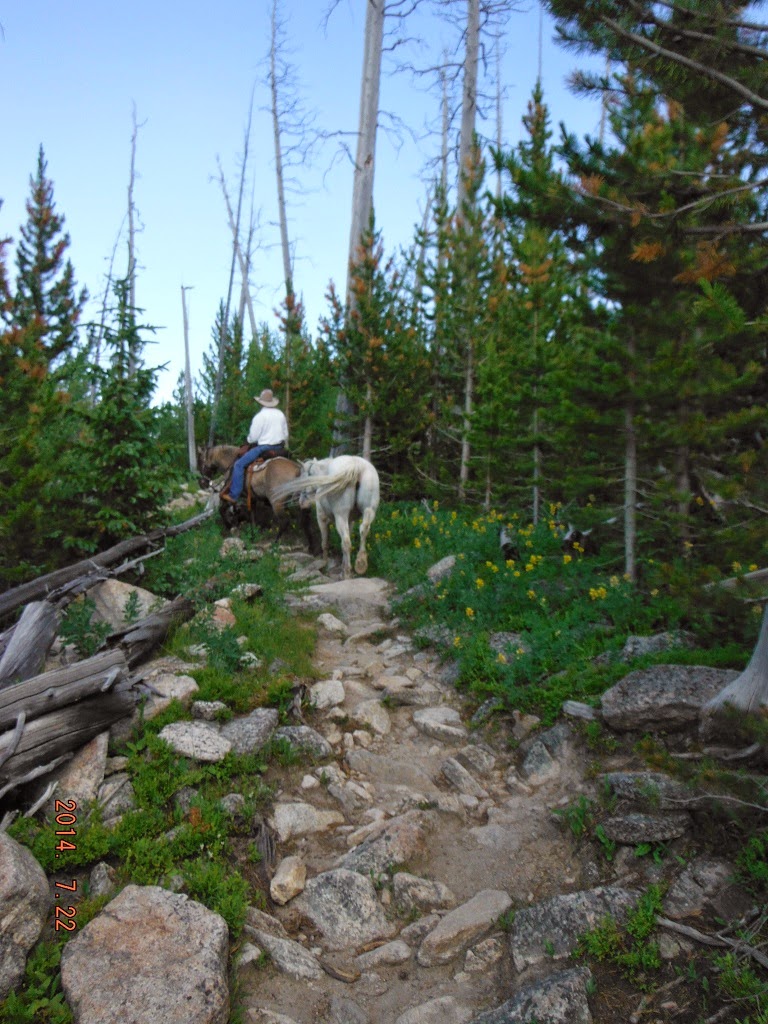 We rode through a lot of wild flower patches. 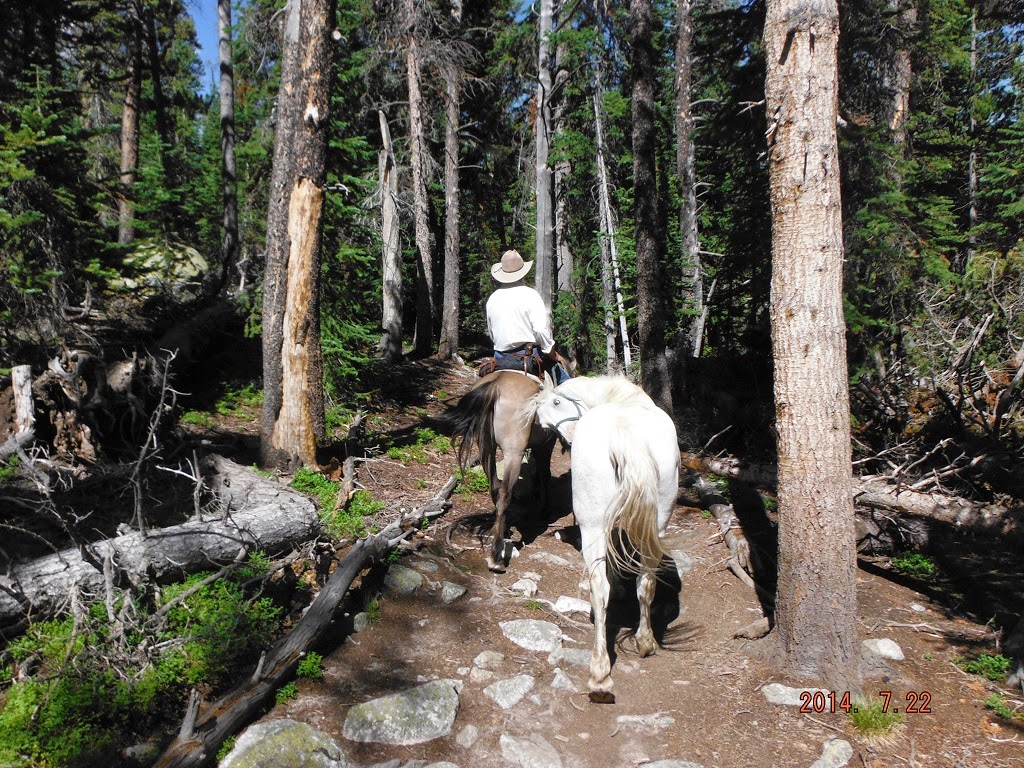 I threw this picture in just for fun.  Did you know a horse could bend their neck like this?  Jesse can be pretty determined when chasing a fly biting her.

We had a super ride day and came back pretty refreshed, albeit a tad sore from 5 1/2 hours in the saddle.  OK, most of my soreness is from taking a spill on the trail - not from my horse - from my own two feet.  Sometimes my rigid tailbone causes my feet to fall asleep when I ride for extended times.  The last 1/2 mile of the trail I decided to hike on foot;  Washoe seemed to be getting a little foot sore so I thought I would give him a break.  I dismounted fine, took about three steps and found myself sprawled on the ground with a  big white horse standing over me like I was nuts.  So I now have two bruised knees and a bruised elbow to prove that I'm not too great without a horse under me.  The rest of the walk to the trailhead was uneventful.  At the road, I hopped on Jesse bareback and rode the last 1.6 miles home.  When I unsaddled Washoe I realized it wasn't his feet causing the problems; he had gotten dehydrated.  The goof preferred eating grass at the water crossings when the other horses drank.  I will watch him closer next time.

Posted by Allenspark Lodge at 11:46 PM