One of the Colorado horse trainers that Juanita and I follow trains mustangs.  Her name is Jessica.  She has regularly placed in the top 10 in the "Extreme Mustang Makeover" series.  Raw mustangs are assigned randomly to the trainers, and they are then trained for about 3 months.  Then they are taken to a show with 20-40 other mustangs and put through their paces, so to speak.  After the show, prizes are awarded to the trainers and the horses are auctioned off.

Mustangs that have not been handled are auctioned off by the BLM starting at $125, and go up a little from there if the coloring/confirmation is unique or quite good.  The trained mustangs at the end of the Extreme Mustang Makeover tend to sell for $500-$10,000, depending on how they showed and how many people are bidding.

Now, I trained my old mustang Ranger.  Or more accurately he trained me.  Ranger is now about 30 years old and he is not very interested in rides of more than an hour or so, so I have started looking for a younger mount for longer rides.  I had pretty well decided I didn't want to start from the ground up on another horse, but I did want another mustang.  I think Juanita had gotten tired of only short trail rides, so for my birthday I was going to get a horse.

Jessica the trainer had a horse that caught my eye.  She called him "Alloy".  Short, just over 14 hands.  Plain, just a bay with no white socks or snips or blazes or nothing.  No "chrome" at all. But she felt he would make a very good trail horse.  I followed his training on Jessica's facebook page, and I was going to bid on him at the 2016 EMM show in Ft. Worth, Texas.  Unfortunately, he did pretty well in the show, and the bidding went out of my reach in just a few moments.

I went back to looking for a new trail horse prospect, with no success.

Then, in mid December, I got a call from Jessica.  It seemed that Alloy wasn't going to work out for the lady that bought him, and she asked if I was still interested.  I told her yes, but my cash in hand had stayed the same.  I could not pay more than my last failing bid.  "No problem" was the reply.

So, now we drive to San Diego with a horse trailer and pick up Alloy.  We spent a couple days visiting friends in southern Arizona before going to Alloy's new trainer's facility just north of San Diego to get Alloy.  We stayed with friends about a 20 minute drive from the trainer's place so we could spend a day working with Alloy. 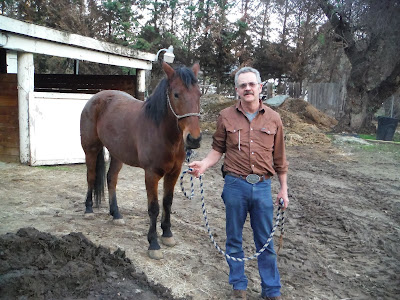 It was in the mid 60's there in California, and we had temps of -15 degrees back home in Allenspark, so we practiced putting him in a plaid school-girl's dress and then loading him in the trailer, just in case we needed it. 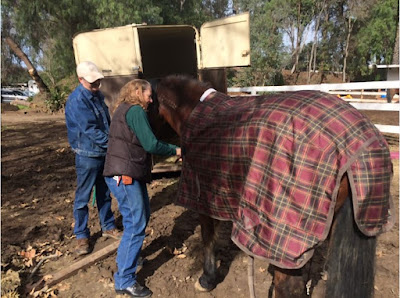 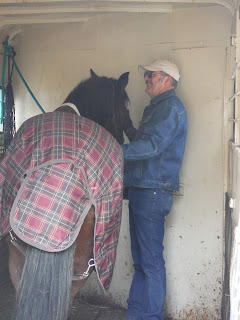 He loaded up pretty well.  Better than Ranger, anyway.

So, off we go with Alloy in tow for another overnight stay in Arizona.  It took about 8 hours and then Alloy got to stay in the ranch's round pen from about 10:PM til 7:AM, and we were on the road again.

The trip from southern AZ to Allenspark usually takes about 14 hours counting rest stops for the horse. 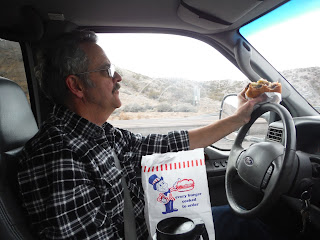 This trip took closer to 16 hours.  There were KILLER winds blowing from Pueblo, CO to Colorado Springs.  We saw 19 tractor/trailer rigs blown off the interstate and lying on their sides  Ninety nine MPH gusts had been reported.  Sometimes I feel bad about having a heavy, steel trailer making bad fuel mileage heading down the road.  Not this time.  The wind beat us up a little, but no real problems.  Then we reached snow and ice heading up the mountain to get home.  Twenty miles at 20 MPH.  We got home late, and just pulled the panels out of the trailer to make a nice box stall for Alloy to keep him out of the weather. 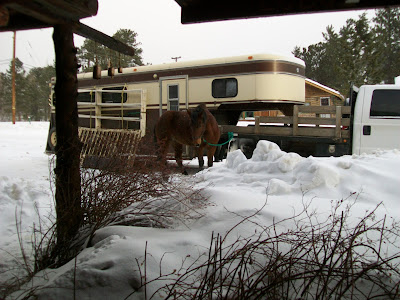 He was from Colorado originally, so he didn't panic with the snow, but he didn't look thrilled...