Bill told you about the llamas ... or llammers, as Ranger calls them.  Jesse and I had more fun with the "trail"; a trail that obviously had not been ridden since the last time we rode it, over a year ago.  A lot can happen to trails around here in a year's time, especially when a winter is included!  One of our favorite passtimes is the 'cleaning/clearing' of trails, so how fun it was to find one at the END of summer. 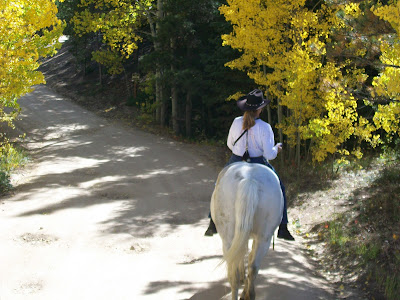 Just at the toe of my right boot, you will see the beginnings of a trail ... honest, it's there. 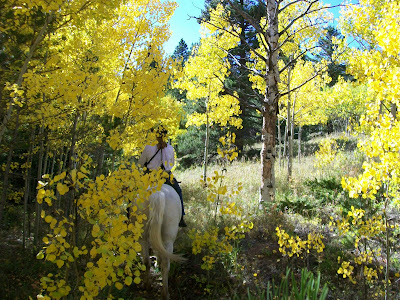 Less than 15 ft. along the trail and you can see how overgrown it has gotten; the aspen leaves were a magnificent color and I love the sound when they touch you as you. 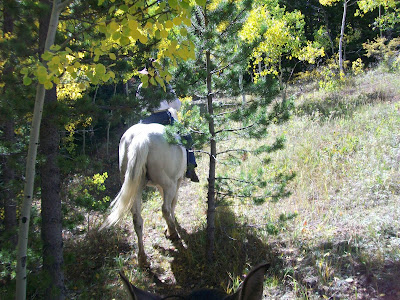 Next, we practice weaving between trees, some of the spaces not much wider than a certain horse's plump behind.  (Are you listening, Mrs. Mom, if you think Luten has weight issues?) 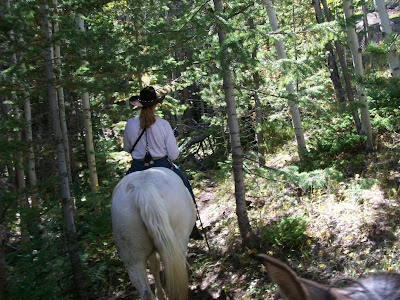 A look ahead at the next obstacle (enlarge the pic by clicking on it, then describe what you see past my right shoulder) totally blocking the trail.  Upon closer inspection, it was obvious we could climb to our right and cross more deadfall ... or go left down a steep embankment into the dry creek bed, but I couldn't see what the terrain looked like to climb back out of the creek.   So...... 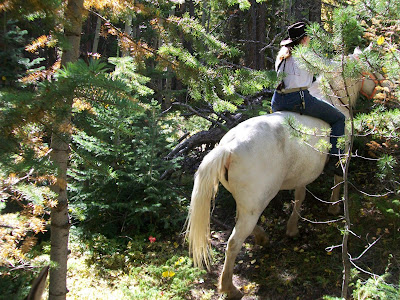 ... up and around we go, letting Jesse pick her own way.  Bill thought she was going to high-center herself in a couple of places, but I trust that horse implicitly in these situations - her balance and strength are remarkable. 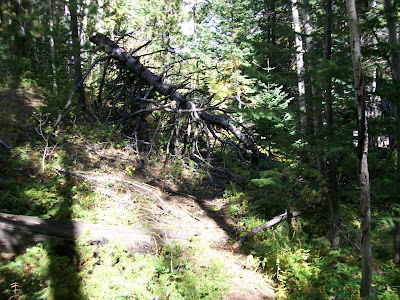 After we were back down on the trail, I chanced a look over my shoulder.  Wow! 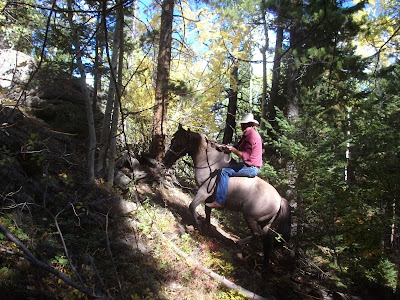 Bill and Ranger going the same way.   Bill actually admitted he had to grab a handful of mane; yep, the angle is right.  It was close to a 45 degree climb, but then these Mustangs think they are related to mountain goats, anyway. 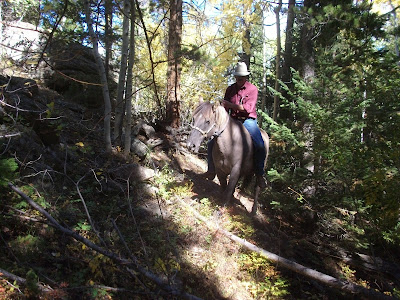 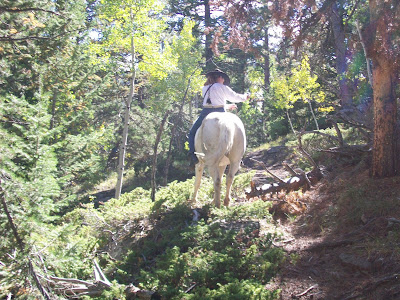 After "the tree", we descended down into the dry creek at the correct crossing and headed back up the opposite hill, just to encounter some really pokey stuff, which the horses stepped around and over with the finesse of their breed.  At one point we had to step through a grouping of four slimmer trees, laying across the trail, about a foot high and only about two feet between each.  Talk about working poles, these could easily break a leg if not done well.  I was disappointed my picture came out too blurry.  Probably because my hand was shaking thinking of a misstep, but I should know better.  These guys won't go somewhere they think is too dangerous to their welfare. 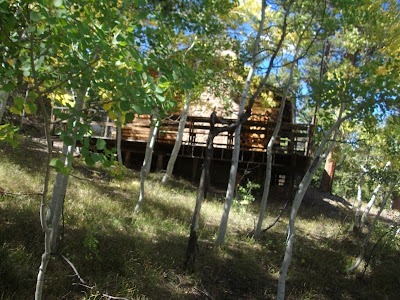 At the top of the trail, in the middle of the National Forest, is this cute cabin.  Boy, couldn't we all just live there for a time?  Just threw this in to make you drool. 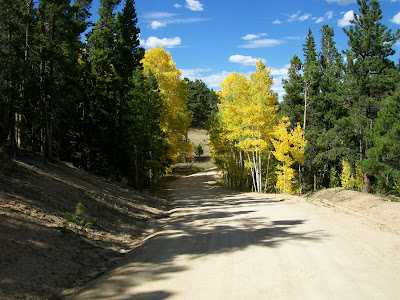 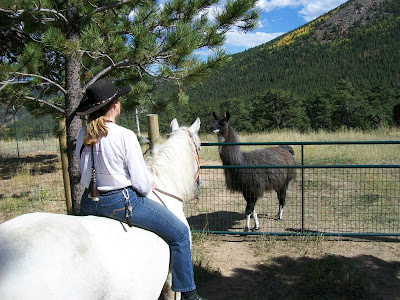 We need to say good-bye to our new llama, llama friends.  Jesse would have walked right up and touched noses with this guy, but I was afraid she would then snort at him and he would retaliate by spitting back ... and I would be the end recipient of that spray! 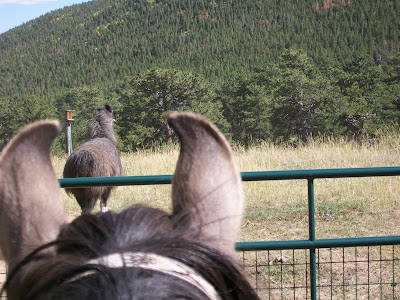 Ranger to the rescue - scaring the nasty male, stud llama away.  Look at the llama's ears; he is very disgusted at that "other" llama that keeps appearing on the other side of the fence.  We do love your ears, Ranger.
Juanita
Posted by Allenspark Lodge at 12:37 PM