The small stream our horses drink from is freezing up.  Happens every year.  So today I drug our 100 gallon Rubbermaid water tank over to the corral.

The grays watched me drag and haul the tank into the pen with great interest, and then ignored me once I quit pushing it around.

Ranger, however, flipped his lid.

"What are you doing, Beel?  That is a bigblackscareything and you LEFT IT IN MY PEN!  Are you CRAZY?!?"

So, I walked over to Ranger, took my belt off, and was going to put it around his neck and lead him over to the tank and make him touch it.

And I spent 10 minutes chasing him around the pen trying to catch him.

Chasing Ranger around reminded me of when I first got the old mustang.  He was 9 or 10 years old, and had never been handled.  He was pretty sure he knew all he needed to know, and one of the things he knew was I was not going to get ANY WHERE NEAR him.

I can not rope.  At all. Period.  But that was the only way I was going to catch him.  So I started to learn.

Each time I would rope the horse, I would gently touch him/brush him/give him some grass.  Then I would release him.

By the time I could rope the horse in 3 or so tosses, I was getting pretty proud of myself.  Until Juanita pointed out that by this time, Ranger wasn't running in terror from me, but trotting slowly at ropes length holding his neck out to make it easy for me to rope him and be nice to him. 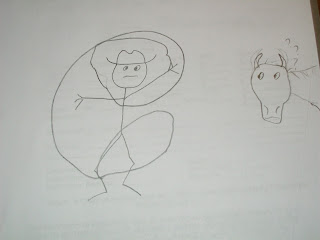 To this day, I must walk up to him swinging my lead rope over my head, and then drop the end over his neck before he is "caught" and will let me put his halter on him.

As I was chasing Ranger with my belt, I realized what I was doing.

I swung the belt over my head a couple times and he walked up to me.  I dropped the belt over his neck, led him over to the tank.

Sometimes I forget MY training and Ranger has to remind me.