On GunDiva's real birthday, she opted not to come ride, but decided to ride a couple days later when she would actually have more time.  OK ... let's ride anyway ... so we decided on a trail we haven't been on for maybe two years.  We needed to check runoff damage, right? 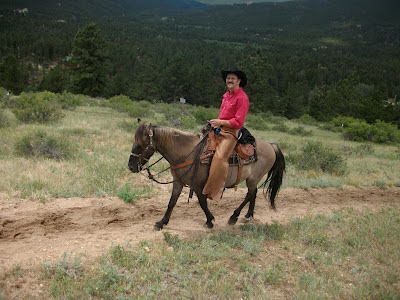 We decided this trail might take a little preparedness to ride, so we outfitted up.  Notice:  saddles, chaps, bridles, slickers, first aid kits, food ... and the widest grin I have seen on Bill's face in a really long time!  This wasn't a sneak out for a few minutes or quick trip on the mountain.  This was a for-real ride and well worth the extra effort.  We even told the wranglers on the way through the livery, "If you don't see us come back tonight, don't bother to look for us.  We've just run away from home!" 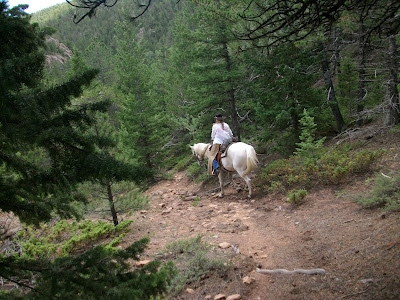 This trail has a lot of steep maneuvering to it.  No pictures of the rough stuff 'cause it took some real concentration to ride.  We even commented that we were sure glad we were on barefoot horses; those steel shoes would have been a hazard in many places, as we did some hopping from rock ledge to rock ledge. 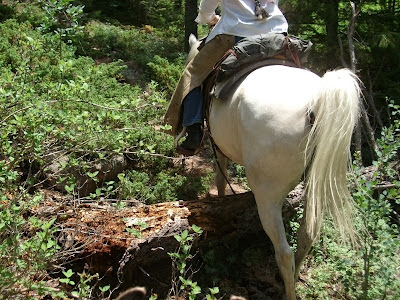 There was a lot of downed trees across the trail, of course, considering what our winds were last winter. 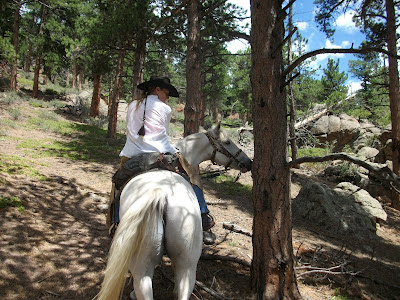 Washoe took to smelling the pine trees through a certain area, both going and coming back; just in that area - and it was usually the smaller trees right next to the trail.  I think he was picking up the scent of a passing bear, or something.  Even Ranger would take a sniff of the same trees. 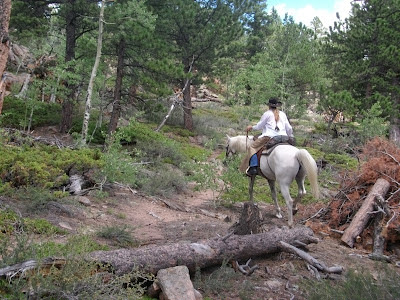 We also had to handle a lot of downed trees from the forest service doing fire mitigation. 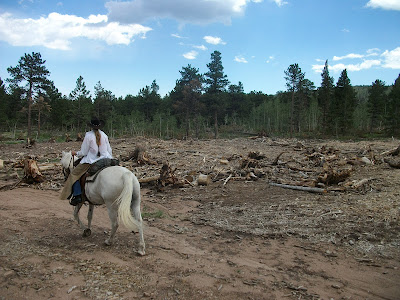 The tree graveyard.  Several miles in we got to the tail end of an area where they have been logging for the past couple of months.  Nothing but tree roots and bark.  Everything else got hauled off as logs or shredded into mulch.  It was a pretty sad sight. 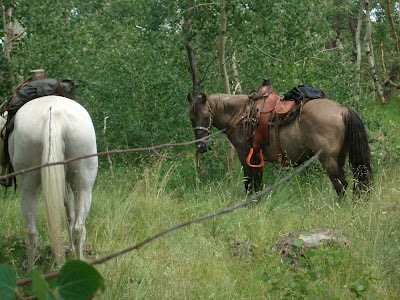 We did get to greener pastures, though, thanks to Ranger's fantastic guidance system.  He knew exactly where we used to picnic, even though the tree graveyard threw off OUR sense of the trail system. 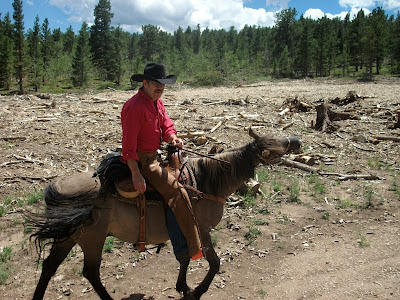 On the way home, Ranger gave us his opinion of the 'graveyard'! 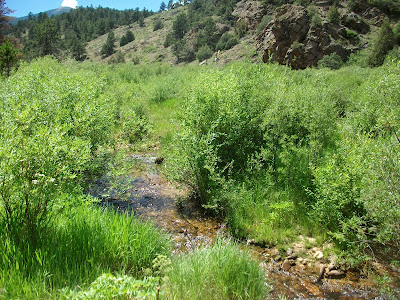 Not wanting to quit the ride yet, we swung by the beaver ponds, and were delighted to see water again ... and look at that greenery!!!!  The last week of rain storms has brought life back to our mountain side. 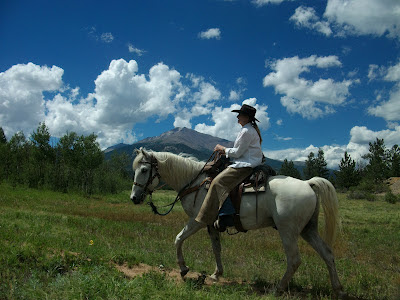 Back to the blue skies .. and one muddy horse.  Well, Ranger was muddy, too, but it's really hard to see muddy water stains on a brown-ish horse!

What a boost to our psyche in the middle of the summer.  The outside of horses really is good for a person's insides.
Bionic Cowgirl

Posted by Allenspark Lodge at 11:35 PM