We had an hour to kill this afternoon.

No cameras.  We are just going around the block.  Okay, it's about a mile and a half around "the block", but still, why bother.  We're in town (such as it is) the whole way.

A little over a half mile from home, both horses stopped and stared up the hill beside us.   "What you see, Washoe?"  I asked.  Then I saw it.  A big black dog about 30  feet from us, running in the same direction as we were going.  Paralleling us.

Oh-ho, that is what Jesse had spotted.  The adult bear.  And the OTHER cub.

I know the big bear was a female, because she was looking alert and concerned, where as a father out with a set of twins would look harried and bewildered.  And maybe a little scared.

We were between the mom and her cub, even if off to one side, so I hollered at Juanita and we turned back and went back down the road 30 feet or so, so we were no longer between them, and turned to look. 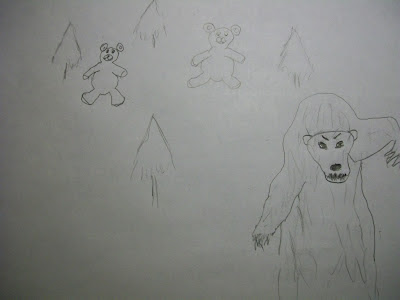 The first cub had crossed to the road by this time, and soon the second cub got there and stopped in the middle of the road about 60 feet away to stare back at us.  It looked for all the world like he was about to come up and investigate us closer, when Juanita hollered "Git!  Go on!"  He looked shocked and then ran away from the strange two headed horse that barked at him.

Mom quickly followed across the road and down the hill on the other side, while keeping a wary eye on us.  We waited a minute, and then continued our walk.

Pretty soon, a mini-van pulled up next to us and the guy said out his window "Well, it looked like your horses weren't too worried about the bears."

I told him "I think I was more concerned than THEY were."