I think Bill left us having just arrived at our friend's place in Cape Girardeau, MO.  My initial goal had been to ride the horses on/near the Mississippi River.  Well, we made it that far and L & B graciously took us in, pretty disheveled from spending three hours sleeping in a rest area about 1 1/2 hrs from their house, having driven over 10 hours to make our 'escape'.  The plan had been to advance to Eisenhower State Park to get nearer to our goal, camp there a night and continue to our friend's home for dinner the following night.  Upon arrival at Eisenhower, it was foggy and rainy; we had NO desire to try to set up camp in the rain and Bill felt rested so we made the decision to continue on and pull over in a rest area just shy of the MO border.  Did you know that you are not allowed to unload livestock at any rest areas in Kansas?  So we crossed over into Missouri, headed for a rest area just on the other side, shown on our trusty 2012 atlas.  Rest area?  No?  Our friends later explained that due to lack of resources, many of Missouri's rest areas have been closed down.  We kept driving to the first one we came to - that close to their place - but it was 2:30 a.m., so we pulled into the only spot left between some mighty big semi trucks, crawled into the bunk in the trailer and crashed for three hours.

Our horses are such great travelers; a little hay, some water and a few short stops to rest their legs and they stay in great humor.  We have a camera installed in the trailer, so I can turn on a monitor in the cab of the truck from time to time and check on them.  Imagine our surprise when we pulled into L & B's place, opened the trailer and found - a brown butt standing at the door!  Ranger loads first, so he is at the front of our three horse slant load trailer, then Jesse, and finally Washoe, with stationary panels locked into place between all of them.  I had checked on them 20 minutes before arriving and they had been in place, standing quietly.  How did Ranger get to the back of the trailer?  All four of us stood with gaping mouths and all three horses stood calmly in the trailer, but NOT where they belonged!  Finally getting our wits about us, Bill unloaded Ranger on voice command, we lifted out the panel that was now on the floor leaning between him and Jesse, then Washoe backed out on command, and finally Jesse backed out, leaving the last panel still on the floor leaning against the wall.  It could have been such a wreck had any one of them panicked; tangling their legs in the panels or just getting tangled up themselves, but they stayed calm and just waited for the unload commands.  I can't say enough about the great training methods we have been taught and the trust these guys have in us... and us in them! 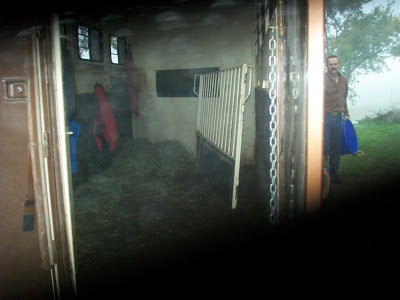 All we can figure is that Jesse (who lifts wooden corral fences with her neck) lifted the panels off their hinges and let them slip to the floor.  The gravel road had been really bumpy and may have jostled one loose and she just 'fixed' them.  She does those things.  Anyway, they weren't the least concerned and had a good roll in the round pen that was set up for them.

It was drizzly Saturday, L is a cross country coach and his team had a meet that morning, so we just hung out and napped until he got home.  We had planned to be on the road this day anyway, so it seemed like a great way to relax.  Sunday we went to church with them, then headed out on a sight-seeing tour.  We drove down to the Mississippi River and walked the flood retaining wall.  They have painted the town side of it with murals of local history, making a cement wall really attractive.  This was my favorite of the paintings. Doesn't look like cement, does it? 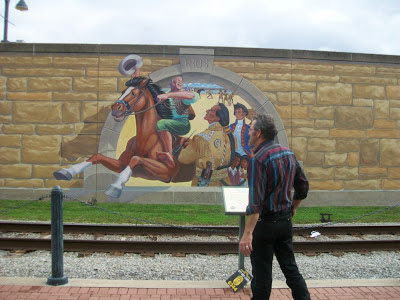 We continued on the drive to Point Cape Girardeau, where we could get a good look at the local foliage, but look how low the river is!  All that sand should be under water.  In some places there are islands in the middle, causing a lot of difficulty for the barges delivering goods. 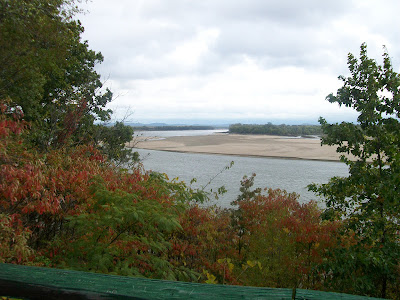 We decided riding the river was not a good idea and headed back to L & B's.  L offered to let the horses loose in one of their pastures so they could just run, eat and enjoy.  We agreed and headed out leading the horses, when I looked back and saw Bill.  This is the only 'ride' that occurred in Missouri! 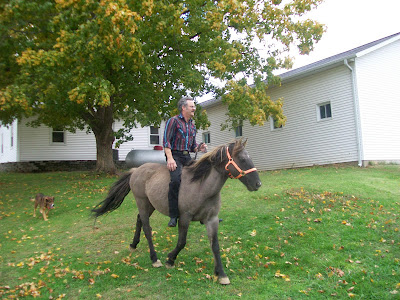 See the cute little dog following Bill?  That's Dingo - who looks so much like Sophie that we often had to look twice.  They ran around the place together until they wore each other out; Dingo is a couple years older than Sophie, who's eleven.  While the horses were out we hiked all over the place; it was such a beautiful afternoon and their property is breath-taking. 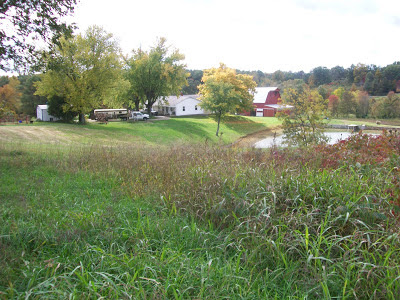 Bill says he could live in MO, 'cause it has lots of play toys.  He got to play with a Missouri Black Snake, about an eight pound snapping turtle, a big box turtle, and a garter snake.  The six year old in him was delighted!!!  B & I picked pecans off the trees next to their pond, so I got to bring home fresh pecans, which are now drying on our counter - with snow outside the window. 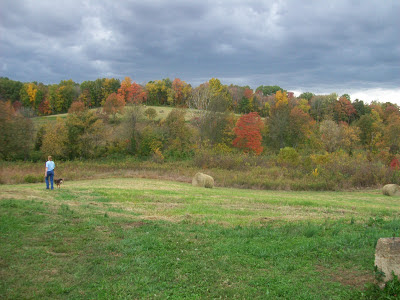 This is some of the pasture on the back side of the barn; Sophie and I were walking out to meet the horses.  The trees were so pretty!  They had four different pastures like this; this one, the one above it and one to each side;the horses were in one off to the left of us, but they met us at the gate when I called them. It's a good thing L loves to mow, because in MO this could get ahead of you in just a few days from all the growth we saw.  It looked like spring here, except for the fall colors.

The next day we headed back across the state and into Kansas, for Eisenhower State Park.  This scene was along the way. 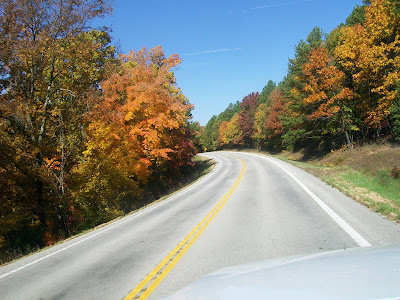 It took us about eight and a half hours to get back to the state park, but still after hours for the visitor center, so we found a camp site - still daylight this time, and sunny - put the horses in a pipe corral with our number on it and cooked ourselves a feast for dinner.  Since this was actually our anniversary, we treated ourselves to a movie, "Back to the Future".  Bill remembered that in the movie, this was the future date on the 'time machine' car.  It was funny watching what they had considered it would be like right now.  I think the only major difference being kids nowadays don't ride hover boards - but wouldn't that be fun?  We thoroughly enjoyed putting a disc in a laptop and kicking back in our camp chairs and having the whole park to ourselves.

The next morning we unhooked the trailer and drove back to the pay station, got officially checked in and was told we should stay through Sat. so we could do their benefit ride that day.  Bill and I just looked at each other and laughed, then explained to the rangers we were on a mission to avoid people for the week.  They gave us the heads up on the best trails, which had just been groomed in preparation for the ride, and asked for our feedback on anything they might have missed.  We only found one little snafu - signs pointing in the wrong direction from one trail to the next at an intersecting campground.  We spent some time hunting and back tracking until we located the trail.

We opted to do the trail backwards, as it wound around the edge of Melvern Lake, which is made up of lots of 'fingers', so you were weaving in and out along the woods at the edge and then ending with three miles of meadow riding. This picture is for Ranger's 'ear' album. 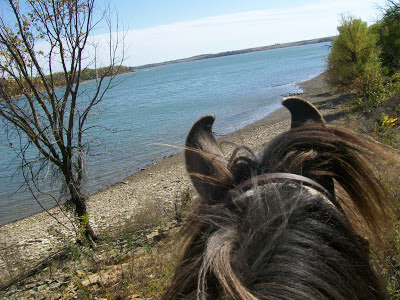 There were a couple of places that you could actually ride down to the lake's edge.  I was riding Washoe this day, so we left Jesse tied to a nearby tree, not knowing how the horses would take the waves with the wind.  Washoe preferred staying near the bigger rocks, as his feet would sink up over his fetlocks in the smaller rocks when the water came in. 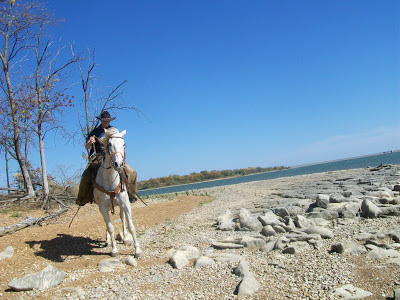 Neither horse seemed bothered by being walked right up to the water, though.  I think they are now officially deep-water certified. 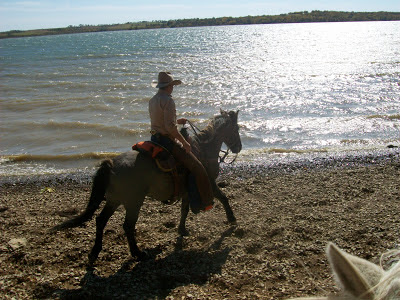 On the second time down to the lake, Bill ponied Jesse along with him and she marched right down and stuck her nose in the water, until a wave splashed her face.  The wind was blowing really strong, creating a lake's version of whitecaps.  Ranger was trying to figure out what they were. 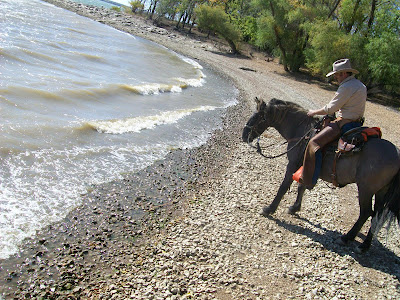 There were intersecting trails and we thought we could take one of the short cuts back if the horses got too hot or we got tired, but we did the whole 10 mile planned ride, plus 1.5 miles each way to our particular campsite, in just under four hours again. The horses did great and came back as energized as they had left.  The new sights and sounds seemed to revive their interests.  I really liked that they had marked these trails with mileage markers, every half mile, so you had a good idea of where you were on the map (markers on map, too) and how far you had gone.  We are very impressed with the condition of the equestrian trails in the Kansas State Parks. 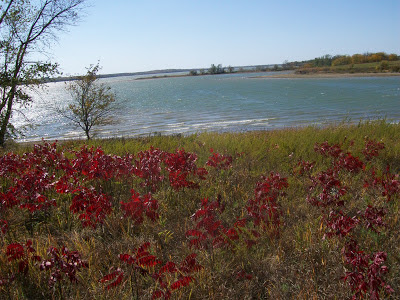 This was just another glimpse of the lake, over our shoulder as we rode cross country back to our camp, located on another arm of the lake.  We hit the showers, watched another movie and got ready to head back home the next day.  We couldn't have had two better ride days.  The 50% chance of thunderstorms that day never materialized, as you can see from the blue sky.

After putting over two thousand miles under our tires, we were excited to get home, as blogger friends from Washington state were meeting us the next night, to stay at the lodge for the weekend.  As you already know, Rachel and Mr. Daddy and IttyBit got to visit.  Wow!  A great way to end a great trip.

Posted by Allenspark Lodge at 8:19 PM

Email ThisBlogThis!Share to TwitterShare to FacebookShare to Pinterest
Labels: lived to tell the tale, stories I love to tell, trail ride, vacation