Some sleeps ago Beel and Waneeta taked us- the horses- and put us in the rolling shed for what they called a "vay-kay-shun".

Vay-kay-shuns mostly seem to be a lot of work for us- the horses.  But when we got to the far away place it was no work.  And it was only fun and eating.  It was good.

The far away place was called "Misery" I think.  I do not understand why they would call it that.  Riding in the rolling shed behind the stinky truck through "Kan-suss Chitty" and "Ain't Loo-is" was no good.  But when we got to the farm it was VERY GOOD.

You may think I am crazy like a dog but there on the farm GRASS GROWS OUT OF THE GROUND.  It grows EVERYWHERE.  No matter where you look there is grass.  It is the most good place ever.  The first thing I did when I got out of the rolling shed was roll and roll in the grass in our new corral. 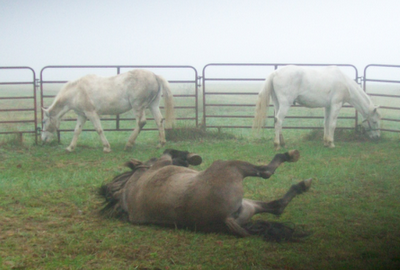 So much grass grows they ROLL IT UP IN BIG ROLLS SO YOU CAN EAT IT LATER.  I have never ever see'd such a thing. 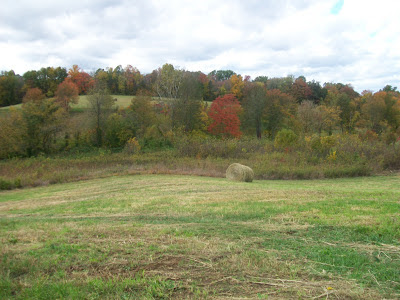 Beel only sat on me for a little while while we went to another big field that was covered with grass. 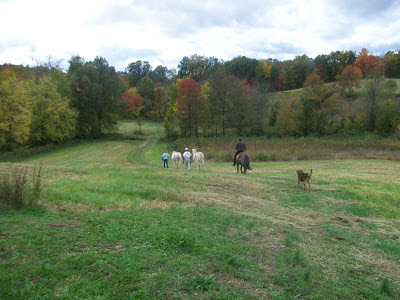 Then we- the horses- just walked around and ate.  Beel went and played with snakes and turtles.  Snakes I know and they can be bad.  Turtles are rocks with legs.  Very strange.  It made me very happy that Beel was busy walking with the people and chasing worms that bite and legged rocks.  I got to just eat and sleep.  It was warm and sunny there.

We did not stay in Misery very long.  Only a couple of sleeps.  Then we got back in the rolling shed and went to work in Kan-suss again.  Then we wented home.

When we gotted home a lady came and rided in the mountains on me.  She was called R-H-L I think.  She is a blogger like me.  She was nice and not as strange as Beel. On the ride there was not so much grass growing out of the ground here like always.

For the last couple of sleeps the white-cold falled out of the  sky.  Beel sayed we had "a foot of snow in the last couple nights".  He is wrong.  It was WAY over my foot. 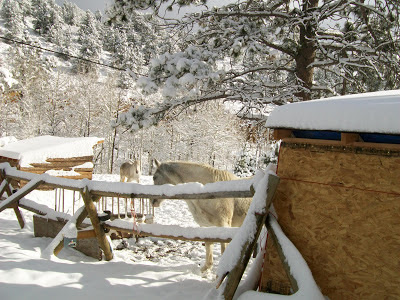 The trees are moving so the air goes fast and it gets cold.

I think I am ready for vay-kay-shun again.  I liked being in Misery.


Posted by Allenspark Lodge at 9:59 PM

Email ThisBlogThis!Share to TwitterShare to FacebookShare to Pinterest
Labels: vacation