It Could Have Been Worse

At the last some dark times ago many peoples were at the people barn.  I heared some of them say that there was a weeding.  And a man and woman were getting buried.  Every one seemed very happy.  I do not understand.

When all of the peoples left the barn, Beel and Waneeta comed over and sayed we were going on a walk.

"Weddings are tough, Ranger.  We need some time outside now.  Let's check out the trail to Calipso Cascades in the national park."


I like short walks.  I do not like long long walks.  They are hard and it is a long time before you can roll and make the itchies go away.

We started to walk down the rocky-dirt-car-road to go to the the far away trail.  This was not a good thing.  I tried to show Beel how to get home faster by going into the neighbors yards to turn around.  I tried to go into EVERY YARD and he never understanded what I was showing him.

He is not smart.

"You nitwit!  Stop it.  We are going to Calipso Cascades."

After a long enough walk on the dirt-car-road we got to the too long skinny trail.  I telled him-This is the last time to turn around Beel.  But we keeped on going.

Not smart at all.

I gived up.  We were going for a too long walk.

"Man, it's about time you settled down, Ranger!"

I think the trail does not end. 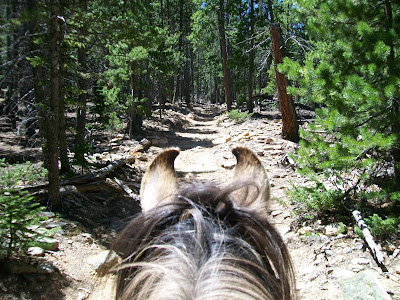 We walked next to a tree that had scratches on the outside.

"Look at that!  A bear climbed that tree and dug it up good!"

He is not there now Beel.  Why are you looking.

We did pass some crazy things on the trail.


We passed some logs stacked under the trail.  Beel sayed they were there so the trail did not fall down the hill.  I did not like that very much.

"Hey Ranger,  we're within a half mile of the Cascades!"

This is not a good thing Beel.  The log is in my way.

Beel taked the chair off of my back so I would be shorter and could walk under the log.

Have I sayed Beel is not smart?

Beel put the chair on my back again and we turned around to go home.

"Jeeze Ranger, I still think you could have gone under it if you had just TRIED"

Going home we went over the stacked logs again. 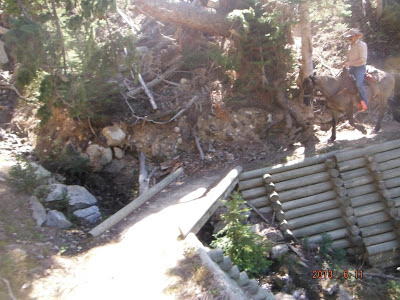 I runned fast so the trail would not fall down the hill.

We finally stopped for a picnic. 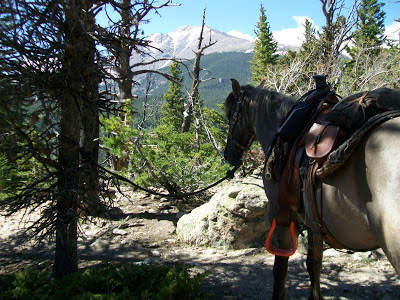 Picnic Beel.  I can not eat view. 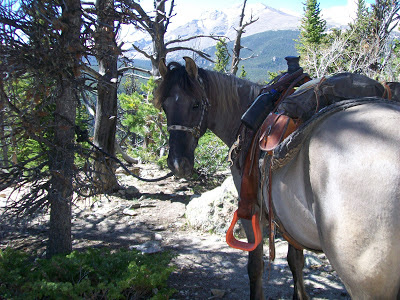 "Well, Ranger, Juanita made me a peanut butter on tortilla with honey rather than tobasco sauce so I could share with you."


We finally gotted home so I could roll and make the itchies go away.

It would have been much faster if Beel had just listened to me.

He is not smart.

Except for the peanut butter and honey thingy.  That was a good idea.

Ranger.  The horse.
Posted by Allenspark Lodge at 10:16 PM