R-  Beel that is not how we do it.  You tricked me.  I'm supposed to run away for some many times.

B-  Right again.  Juanita will write a blog about that.  I'll read it to you later.

We were called into action this weekend to transport GunDiva's and Jay’s horses to the Rocky Mt. Horse Expo.  They had entered a couple of the Mustang Days competitions, but their horses saw fit to not want to load into a very small trailer in the dark in the wee hours of the morning.  After 1 ½ hrs. of try, the kids opted to leave the horses home and head for the Expo, where they had volunteered to work the US Wild Horse & Burro booth each day.

We had planned on being there also, so we said we would go get the horses.  We hitched up our trailer – considerably bigger than theirs – and headed to get the horses.  Of course, the horses had time to think things over, knew our trailer, and gave in.  I walked into the corral with two halters and Skeeter walked right up to me, stuck her head in the halter, then followed me to Copper, who also just stuck his head in.  I left both of them standing there while I checked on the repairs Bill was making to the hitch.  Neither had moved when I got back.  They very smartly stepped into the trailer and we were on our way.

We spent the next three days having a great time at the Expo (a different blog) and decided that when we took the horses back, we would just pick ours up on the way home, being as we were already off the mountain.  We left Denver shortly after noon, dropped Skeeter and Copper off at their home and headed for our winter pasture outside Lyons.

We pulled off Hwy 66 at 3:03 p.m., drove the ½ mile to the pasture and pulled into the field.  We saw Washoe in the middle of the 40-acre field and by the time Bill had turned the rig around and I had closed the fence opening, he had trotted most of the way to us. Bill opened the back of the trailer while I collected halters from the truck.  When I turned around I saw Washoe peeking at me from the open doorway; he was ready to load himself!

Now we had not pre-planned on picking up the horses, so had not taken our halters with us.  There was one extra rope halter in the trailer tack area, and my mecate was at GunDiva's house.  She had also said we could use any halter we found there, so Bill had picked up one.  We figured we could make do since both of my horses load on voice command and neither gets tied in the trailer. 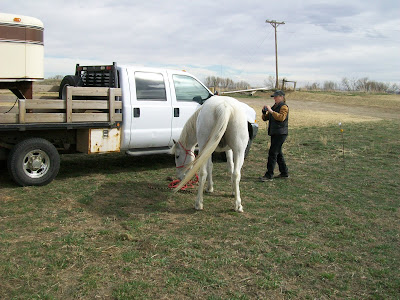 When Washoe met us at the trailer, he got the rope halter so I could lead him back across the field to find the other two horses.  They like to stay around behind the neighbor’s house and socialize with the pig; we also suspect they get treats from people in the house.

When we had crossed to nearly the last area, Jesse finally noticed us and came wandering over – which is about the best she can do right now (read Weight blog).  I put the mecate bit on her, but she felt insulted so I took it off and just looped the lead rein around her neck.  Ranger finally decided to follow along.  Now, Bill had sort of hidden his halter inside his jacket (cheater) and showed Ranger the treat bag.  When Bill put his arm around his neck for a hug, carrying the lead along too, Ranger was caught.  Fastest time ever!  We walked the three back to the trailer and loaded up.  We were back on Hwy 66 at 3:31 p.m.  Less than ½ hour total.


When we got back to the lodge, I went inside and retrieved Jesse’s halter.  She had loaded and ridden with nothing on.  When we opened the door, she stepped out and stood by me while I put her halter on and she gave me lots of horsey hugs while we waited for the others to unload. 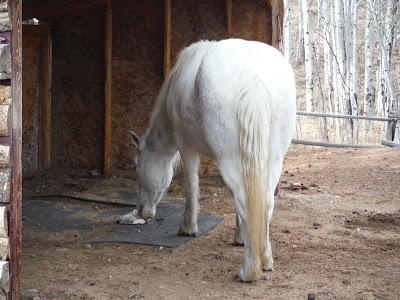 When they got in their corral, Washoe rolled, Jesse checked out the salt block and Ranger headed for the creek.  Zero excitement.  Now we are getting snowed on so everything is normal.  We ALWAYS get snow when we bring them back – even though it was 64* and sunny when we picked them up!

B-  So, Ranger, that's why the trailer smelled like other horses.

R-  Beel on this day it is doing the white falling thing.

B-  Sorry buddy.  We're much higher up here, and we got 4 inches of snow today.

R-  I was more happy with the pigs.

Posted by Allenspark Lodge at 10:41 PM