Juanita and I went back in to find the horses today.  We couldn't have asked for a nicer day.  We ended up walking about two and a half miles back in 'till we found them. 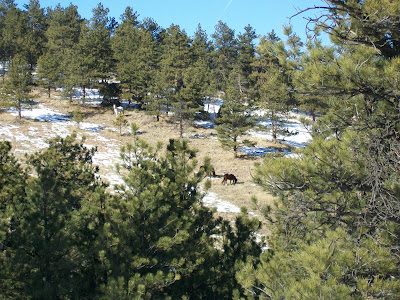 We spotted them across a valley from us in a small clearing, and decided not to try calling them as that would bring them to us in a wooded area, and we would rather have some space around us when the herd shows up.  We figured we would just walk over to them in the clearing. (you can click on the pictures to view them larger) 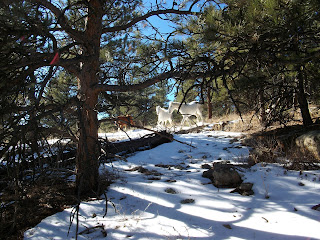 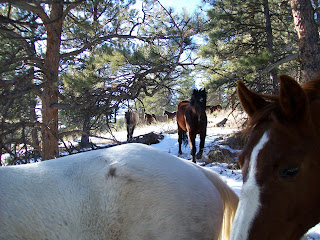 But Washoe spotted us and had other plans.  FOOD PEOPLE!  IT'S THE FOOD PEOPLE! OMG OMG OMG!! He came, and brought the rest of the herd to us at a dead run. 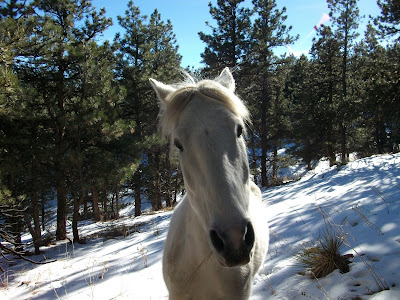 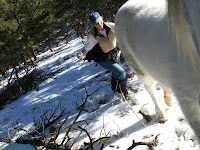 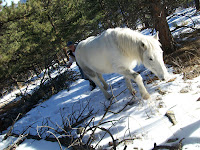 Things were a little crowded in the trees, so Juanita gave Jesse her "tail up" command and Jesse towed her up the hill to another clearing.  I should teach Ranger that command.  When I grab his tail, it's a cue for him to stop  walking away from me.  One of the DJ's on a local radio station uses the "tail pull" to back her horse out of a trailer.  Must look pretty impressive to spectators watching the gal drag a horse out of a trailer by its tail. Come to think on it,  I'd rather teach my horse that. 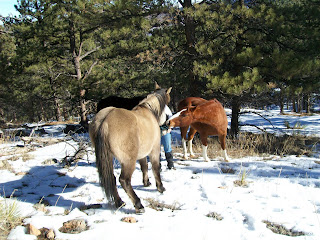 Everybody got a taste of dried apple and dried pancakes or waffles. 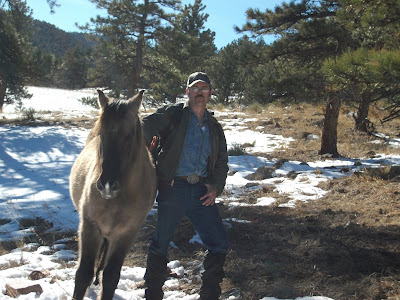 When we ran out of treats, they were perfectly happy to go back to grazing and just hanging out with us.  Ranger's gash is healing up nicely with no sign of infection.  When I asked him about it he just stared at me a moment and said, "Been hurt worse." and went back to eating.  He doesn't say too much.

We left them to their meal and headed home ourselves.  What a great day.
Bill
Posted by Allenspark Lodge at 11:06 PM