We made time for a ride out today and along the way decided to work our way back into a little known picnic area. Bill is ponying Washoe so we could get all four horses exercised; he said Ranger needed some practice with this as he was getting 'lazy'.

Obviously, this portion of the trail had not been used this year, so we encountered some super 'trail obstacles' to practice with, like this very large tree that had fallen almost exactly on the trail. 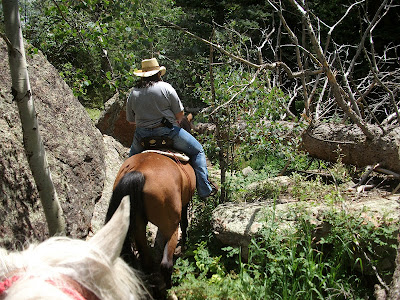 As you can see, there is not a lot of maneuvering room due to the large rock outcropping.  In fact, I have a new bruise on my left shin from not paying close enough attention.  As we passed the downed tree, I was watching all the broken branches on my right and didn't notice the fairly large one poking out of the shrubs on the left.  I believe GunDiva made some remark about us not having our chaps on when we needed them. 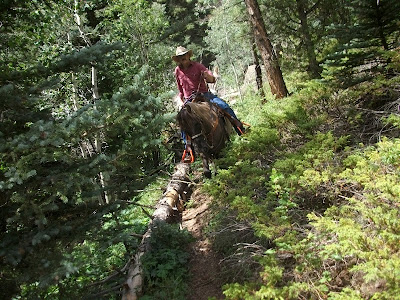 Well, Ranger did a great job handling this with the 'kid' in tow.
A good deal of ducking and dodging was done!  These big boys were a bit on the prickly side.  Some of our evergreens are soft and easy to push out of the way - and then there are these, that could push you right off your horse!  Sometimes the problem is not knowing which it is until you get into them, so we let the GunDiva go first and sort of 'test the waters - er trees'. 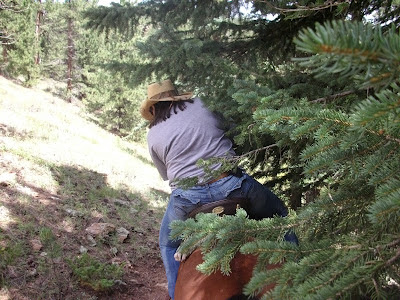 We were delighted to see the streams running again; what a marvelous sound, and everything looks so lush.  It's amazing what some rain can do. 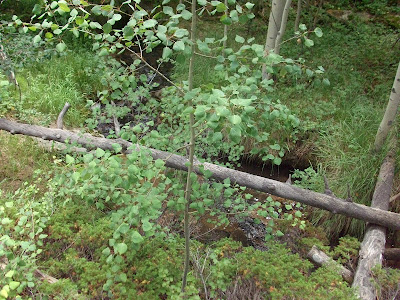 Unfortunately, my camera batteries gave out before we got to the destination, but I am happy to say that even though we forgot people food for the picnic, we let the horses graze for a few minutes so they came away happy campers.

Yesterday, Bill and I had more mounting practice with the new mounting strap.  We used Jesse as the candidate this time.  The first time she wasn't quite sure what to make of things and wouldn't put her weight on the strap, but didn't mind at all having it tied around her leg.  However, I need to remember to hold onto the strap at the withers when I reach down to untie it, because when it slides down her leg she thinks she is hobbled.  As GunDiva said, don't do this with horses who are not tolerant of things tied around various body parts, because you might not know where they end up.

The second time, Bill tried it on Jesse, everything was going smoothly until we had a minor equipment failure:  the strap stretched too much.  Bill adjusted it and mounted quickly.  Jesse had figured it out and stood rock solid for him, more focused on me, watching.  This is a project in process.
Bionic Cowgirl

Posted by Allenspark Lodge at 10:58 PM