I have told before of a horseback trip to the Black Hills four friends went on.  Judge, Lawyer, Cowboy and Innkeeper.  We spent a week riding some of the trails up there.  Meeting people, watching the scenery, and irritating the wildlife.  Okay, not ALL of us were into irritating the wildlife.  Just a couple of us.  Judge and Cowboy seemed to have a basic NEED to bug the native critters.

As an example- we were riding along minding our own business one day, and  the Cowboy spotted a LARGE rogue American Bison bull just off the trail, taking a nap and minding HIS own business  Well, nowadays there is up to a $25,000 fine for irritating the wildlife.  At that time, it seemed to  be only the chance for dismemberment and death that would keep you from p-ing off the local fauna, and I guess that was insufficient incentive to just ride on by.  Cowboy said something along the lines of "Hey guys, watch this!" and built a loop with his rope and headed for the buffalo, swinging the loop over his head.

I don't think most people have ANY IDEA how fast a buffalo can stand up and chase something that it feels is a threat.  They can go from zero to 40mph in point Oh $#!t seconds.  Fortunately for Cowboy, he was on a good ranch horse with a lot of cow (and bull) sense, that got the heck outa Dodge and kept on a going long after the immediate danger was past.  Unfortunately for Cowboy, he was wearing his custom-100X-beaver-Gus crowned-pencil-rolled-brim $1000 cowboy hat he bought for his wedding.  Now, I can't imagine buying a $1000 hat, and if I did, there is NO WAY I would wear it on a trail ride, 'cause it might fall off your head if a rogue bull buffalo charged your horse after torquing the bull off when said bull was just taking a nap.

"Say Bill..."   I was the youngest, quickest and pretty well mounted for the ride, so I drew the short straw.  I rode around behind the buffalo, while the others held it's attention.  My horse and I tippy-toed up to the hat... OFF! ON! AND GONE!

I returned the hat to Cowboy with comments about how much unused space there must be in his skull, as it wasn't a pinhead sized hat.

It was less than 2 days later when our little group came across another lone bull buffalo.  You know, I'm pretty sure these guys are alone because they don't play well with others.  The judge and cowboy BOTH annoyed the beast until it ran blindly into a group of trees and created a one-animal dust cloud as it tried to destroy the entire grove of trees.  As we were high-tailing it up the hill at a dead run away from the enraged monster, Cowboy hollered to me "Doesn't it make you feel ALIVE!?!"  I replied "I just want to STAY alive!" and rode to the top of the hill to look down on the very localized dust storm. 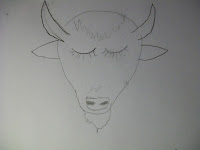 Later that week, after a day on the trail, we had put the horses up and gone in search of adult beverages.  Cowboy and I were in his truck, and Judge and Lawyer were in their rental.  As we were heading down a stretch of highway outside Custer, we drove by a buffalo laying right beside the highway.  We had just passed a guy on a bicycle, so Cowboy stopped next to the resting animal to act as a buffer for the bicyclist.  As the guy rode by and thanked us, we noticed the judge had jumped out of his car, and was throwing rocks and sticks at the animal, apparently in hopes of getting it mad enough to attack Cowboys new truck.  Lucky for us the judge was a lousy aim. 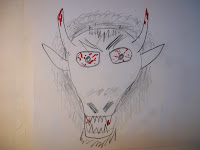 By the end of the trip, I had come to the realization that if we found ourselves among a pair of buffalo bulls, and a pair of buffalo cows with their calves, we couldn't ride off, and I had only 4 bullets in my gun, I would shoot the judge and  the cowboy... twice.

Bill
Posted by Allenspark Lodge at 9:00 AM

Email ThisBlogThis!Share to TwitterShare to FacebookShare to Pinterest
Labels: fine art, stories I love to tell