Most of you following these blogs probably know that Momma Fargo has just completed a move to Indiana; much farther from us than her previous location in Wyoming.  Somehow our intention to visit her there never quite happened and we decided that it was time to do something about those 'somedays'.  You know, always assuming that 'someday' you can do whatever is close to you, never really realizing that life happens.  'Someday' we were going to load up the horses and haul to her ranch for a ride day.  Hmmmm.  Not quite.  So a week ago, we were talking to her on the phone and spontaneously I said, "Hey, we have a few open days next week.  How about we come see your 'Harry Potter' house; it sounds so neat?"  We figured it would be a long day's drive - 14 or 15 hours, picturing her place 'somewhere over by MO where we went last fall'.  Right.

Look at a map; google directions; reality sets in.  How can it be an 18 hour drive?  Well, my geography had gotten more than a little rusty and it took looking at an actual map to see that we would be crossing two states more:  Illinois and Indiana.  Think about this.  OK, I have never been across the Mississippi River that far north by car and it sounded like a fun boondoggle.  (BTW, that far north and west it's the Missouri River, which flows into the Miss. just after you cross it in St. Louis.)  So we checked with MF's schedule and firmed up plans.

We decided to leave late afternoon, drive through the night and get to our destination around noon the following day.  It's a mild misconception saying Mother Nature played a part in our plans; we delayed leaving by one day, hoping to follow the storm that had just hit us in CO. 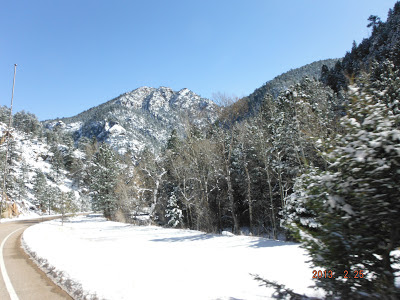 It was beautiful driving down our canyon, seeing the much needed snow, yet dry roads and blue, blue sky!  We watched the moon rise as a huge red disc as we crossed the plains of Colorado.

Kansas was pretty uneventful and we were enjoying a good audio book, when we start seeing winter weather warning signs along the highway, and we drive into snow.  It's going on 2:00 a.m. when we round a curve and come to a halt behind a VERY long line of semi-trucks stopped in the right lane.  A highway patrolman in the left lane signals us to pull to the left and pass them.  OK?  We pass a good 20 trucks, then get stopped behind two other cars when we get to the front of the line, to see one of those big trucks jack-knifed across both lanes and the front end of the truck over the barrow pit, with its wheel fenders jammed into the embankment.  Time to enjoy the book while we wait for the tow truck to appear and then figure out HOW to get this guy off the road.  I have to say, it was interesting to watch them maneuver that huge truck.  When we finally got back under way it was to discover that we really had caught up with the storm, seeing many more of these trucks along the side, barely able to see through the heavy snowflakes.  Between Kansas City and St. Louis we managed to go an average of 20 mph for over 100 miles, getting on the wrong highway once because the snow was so heavy on the roadway that you couldn't tell where the lanes were and the signs were so coated with snow that they were unreadable.  We had discussed getting a motel and spending some down time, but were afraid we would get stuck if we got off the highway; at least those roads were getting plowed - sort of.

About 7:30 a.m., as we are trying to cross St. Louis, MO, we called Momma Fargo (maybe she called us that time?) to let her know we would were not going to get in by noon; maybe by 4:00 p.m. or so.  We weren't even half way yet!  We saw a McDonalds that looked plowed and stopped for breakfast and slept about an hour in the car; we had to let the snowplows make some headway!

We DID pull into her place at 7:30 p.m. her time (2 hr time difference); and she had very graciously kept a wonderful dinner warm for us.  We chatted for a while, introduced MF to 'The Walking Dead', then hit the sack for some much needed rest.

The next day we got to see where she is setting up her new gift & gardening shop - in an old grainery.  What a neat place.  Don't get dizzy, Bill took this shot from the third floor looking down the stairway, vary narrow and steep, spiraling around one of the grain delivery shoots. 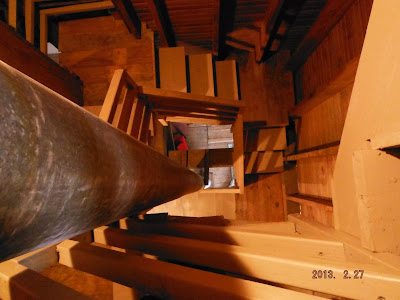 A lot of the machinery has been left intact inside the lower levels. 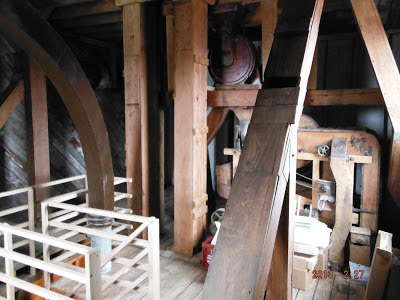 Even the pulleys have been cleaned up and painted, to give the place character.  She had planned on opening the shop March 1st, but some shipments were delayed so now her planned date is March 9th. 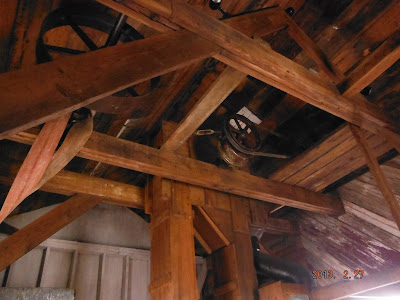 We felt bad about her delayed opening, but it gave her some play time with us, so we visited some fun museums in some neighboring towns and got the lay of the land, so to speak.

Indiana is a leading producer of stained glass, so we found lots of works that included that glass, like this one outside one of the museums. 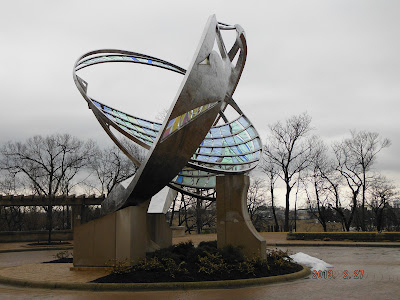 We got home in time to meet the Bug after school and enjoyed a marathon of Duck Dynasty.  Unfortunately, by the time the season premiere came on at 10:00 p.m., Bill and I were watching through 'veiled' eyelids.

One of the interests we have in common with MF is old, covered bridges, and she now lives in a state with several.  We spent one day visiting a couple of them and some more museums - and mansions! 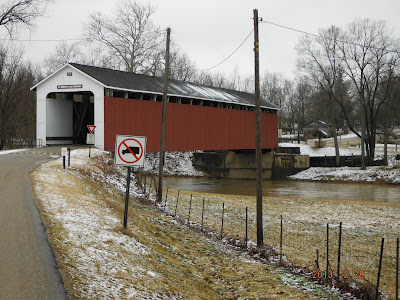 The Cumberland Bridge (1877) is in its original location, but has been restored so it is still in use today.  Look how swollen the river.  We have no water at home and they have more than they can deal with. 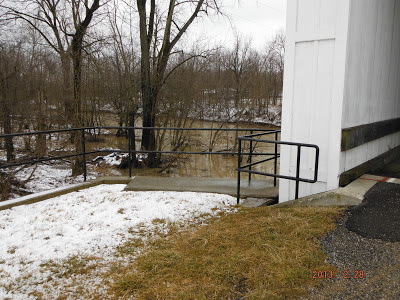 This is the view of the back side of the bridge and you can see how far out side the banks the water is. Most of the fields we passed were water-logged like this; looked like many swamps instead of planted fields. 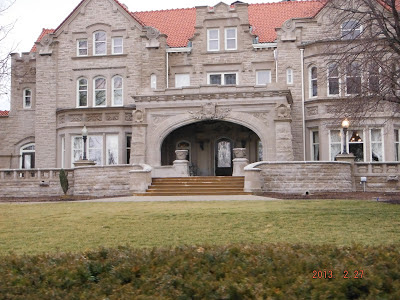 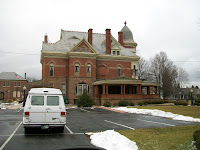 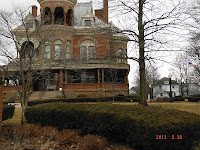 The Seiberling Mansion, one of the larger ones in Kokomo, has been turned into a museum and restored inside, but also used for weddings and other types of receptions.  We were treated to a tour of this one, which also still includes many of the original stained glass pieces.


This Vermont Bridge (1875) was in a park near the mansions and is no longer used. 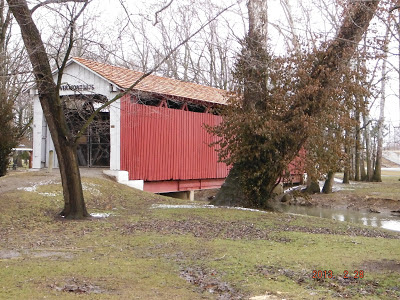 Later we enjoyed the regional math competition and watched the Bug help her school to the second place standing. She has certainly blossomed into a very nice young lady; better get the shotgun ready, Momma Fargo.  You WILL need it!

Thanks so much for a great visit - and the trip home was uneventful - and much shorter!
Juanita
Posted by Allenspark Lodge at 4:06 PM