Today I spent a very pleasant day on the mountain – only not in the normal way, nor on the normal mountain. We have a hiking group that stays with us two days a week, two weeks in a row in the summer. One of the guides stays here with us for the whole two weeks. We are talking professional guides for a professional business: New England Hiking Holidays. We sort of inherited the group when we bought the lodge, as they have been coming here many more years than we have been here. It was a very pleasant surprise and we have thoroughly enjoyed the relationship. The company sets up tours all over the US and some international ones, too. The Colorado tours are located here in Rocky Mt. National Park. Early on, we would hike as many of the trips with them as we could, as a good way to learn the trails in the park. Then we got busier, got into horses, and got very lax on the ‘hiking’ idea. I mean, we have four feet to happily carry us around the trails now!

This year I realized we had not used the “foot paths” at the north end of the Park for over 10 years, so I made a proclamation that I would do one hike a week with the group. Today, we did the Ute Trail; one I had avoided because I don’t normally choose wide open, windy, desolate trails if given a chance to hike in lush forest. Vowing to do better, I put on a smile and headed off to meet the group in Estes Park.

The day was perfect for this kind of hike; we were above treeline, just shy of the Continental Divide. Although it was sunny and 60* when I left the lodge, it was much colder at altitude. At first, I worried that the wind-breaker I was wearing would not be warm enough, and cursing the fact that I had taken my ear band out of the pocket before leaving this morning – as I see a couple of the other hikers donning stocking caps and gloves. Then I reminded myself that I had some major advantages over these hikers, such as being acclimated to the altitude, and used to being outside a lot in cooler weather.
Soon we were trucking along with all of us latched onto our hat straps to keep them from blowing off our heads; it is ALWAYS windy above treeline. The biggest problem I had was picking my feet up enough to not trip over a very rocky trail. Any ‘hiking’ I do is done in my riding boots; you know, smooth leather or rubber soles (depending on boot), not hiking boots with thick rubber soles and LOTS of tread/grip! I also find my depth perception is skewed whenever I am wearing sunglasses, so between that and the boots, I looked like quite a klutz in the beginning.

We hiked along the Tombstone Ridge, on the tundra on the Ute Trail, for about 2.5 miles, to a rocky overlook.

Last Fall we had a fire in the park in the Fern Lake region that extended quite a ways north. On the overlook, we were directly above where the fire ended. What an amazing sight, seeing the type of terrain it burned through, and how it seemed to have stopped right at the line of ‘healthy’ trees. It burned out all the beetle-killed trees and a lot of new growth has already started. Aspen roots don’t usually get killed in a fire, so as soon as weather permits, sprouts shoot up and start defending the pine seeds that now are popped open and can re-seed themselves. One of our guides that hiked down along the burn area a couple of days ago, said some of the aspen shoots were already close to 18 in. tall!

After leaving the Ute Trail, we continued along Trail Ridge road to the highest point, and then hiked a ½ mile trail to the top of more rocks, where a large, young bull elk lay about 30 ft. off the trail, posing for pictures. I thought to myself that this must be a right-of-passage to adulthood for these young bulls; they need to spend so many hours being the ‘local attraction’.

We had a wonderful lunched, served picnic style - or really, tailgate style - out of the back of the van, courtesy of our guides, while located at a pull-over near the top of the ridge. After lunch we drove further up the road to a lava cliff created from ash blown over from a volcano on the other side of the divide, many centuries ago. On our way down, we were also treated to a sighting of seven or eight Bighorn Sheep, with their curly horns, grazing on the slope next to the road. Slightly further we spotted three massive bull elk, preening for the public. 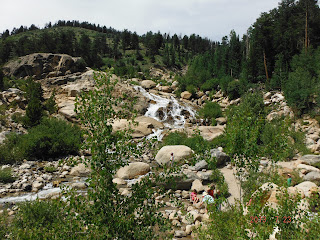 After reaching the bottom of the road, we spent some time at the Alluvial Fan, created by the Lawn Lake flood back in 1982. A dam broke and carried huge boulders down the mountain side, creating the Fall River Falls and this fanlike layout of all the rocks. It is now such a beautiful sight, coming from a catastrophe. Mother Nature at her best. It was especially fun for me, as our youngest son got married there a year ago, and renewed their vows there this last June.

What a day. I guess I need to get out on foot more often.
Bionic Cowgirl
Posted by Allenspark Lodge at 10:37 PM