Strangers by Our Corral

This is Ranger.  The horse.
(Bill, doing sub captions)

This week we had some peoples staying at the next door people barn.
(Guests at the cabin across from the lodge)

This happens a lot, but this time horses were here, too.
(They brought their horses)

The strange horses sayed to me they finally talked their peoples into running away from the big smokes.
(All were evacuated from the big fire 50 miles north of us)

The strange horses sayed they were glad that they were in the rolling shed behind the stinky truck, cause it would have taken two  and a half sleeps to get here of usual travel.  But maybe only one day of super crazy lunitic going.
(They liked the trailer.  It saved two and a half days of walking, or one day of endurance pace)

One of the strange horses scared me some.  He had no eyes on his head.
(One horse had a fly mask on)

Now stop saying those silly things, Beel.  Flys do not wear masks, and if they did, they sure would not fit on a horse.
(Yeah)

But the strange horses eyes came back the next day, and he was fine.
(No flies here, so they took the fly mask off)

I think the smokes from the big fire must have hurt the eyes of the peoples, because they kept calling one of the horses that brought them "Ranger" and he did not look like me at ALL.  Maybe it hurt their brains.
(One of their horses was named Ranger, too)

The kid spent his first day charging the fence trying to scare the new guys.  It did not work.  They ignored him.  It was funny.
(Washoe charged the fence to try to dominate the other horses.  They turned their backs on him.  It WAS funny.)


The strange horses and their peoples have went away again.  Too bad, because it was kind of nice having an other herd to talk with.
(The folks got the call that the fire was out near their home, and though some of their neighbors weren't so lucky, their home was undamaged.  They loaded up and headed back home.  Our horses called after them when they left.) 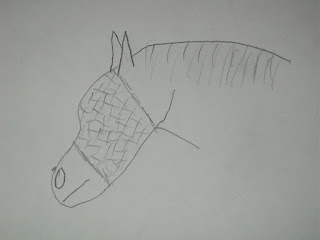 That is all.
Ranger.  The horse.

Posted by Allenspark Lodge at 7:01 PM