Brains of a turnip.  Except I hate to insult turnips like that.

I went out this evening to "bug the horses" as I do most evenings.  Just get a little hands on time, check for new cuts, kick marks, ticks and so on.

I found no ticks on any of the horses, except Ranger.  He had a big, bloated one right on his... umm...  on the... umm... under his tail.  Ranger has always been rather "cautious" about letting anything under his tail, so when I pulled out my Leatherman and opened it up I told him "I really hope this hurts you more than it hurts me."  I have seen the old guy "jackhammer cow kick" through 3/4 inch plywood in his younger days, and have received a memorable pop or two myself.

I slowly and carefully lifted his tail, latched onto the tick near his head (making DARN sure I didn't grab any uh... skin on Ranger) and I pulled the tick off.

NOT A TWITCH from the old guy.  He just looked over his shoulder at me, and when I dropped his tail, he pinned it tight to let me know HE WAS DONE NOW, THANK YOU VERY MUCH, but that was all.

"Whew." I thought. and I closed the multi-tool. 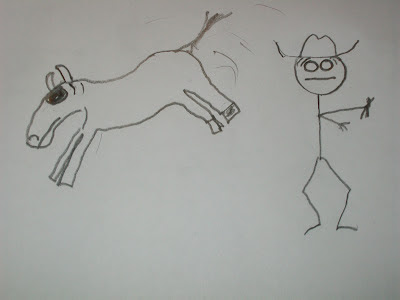 And Ranger was off on a bucking, snorting kicking bug-eyed rampage across the corral.  I stared at him a little bug-eyed myself.

"Ranger, you moron!  You let me RIP a parasite the size of a Volkswagen off your anus and don't move a muscle, But I close a pair of pliers as I'm walking away and you FLIP OUT!  WHAT IS WRONG WITH YOU?!?"