The Spring has Sprung

B-  No, really, horse.  What do you know about this "electric fence gate spring coil" that is stretched to 10 times it's maximum length, the hook/handle is broken off and it was found lying  20 yards from the gate it was supposed to be hooked up to?

R-  That is a very dangerous snake-monster.  It bites.  You are holding it.  Go away now.

B-  This spring was installed less than a month ago.  It replaced the last one that got all stretched out of shape.  Which had replaced the one before THAT that got ruined.  I could never figure out who was destroying these things, until this time, I found a wad of brown and black tail hairs tangled up in it.

R-  It will bite you Beel.  And it will follow you and keep on biting you when you run away Beel.  Go away now.

B-  Both of your pasture mates are white horses.  Only you have brown and black hair.

R-  If you just stand near it it will attack you Beel.

B-  Maybe you should swish you tail just a little further away from the gate from now on?

R-  Maybe you should go away Beel.  It is mean.

It's All About the Grass

R-  Hello Beel.  I am good.  I would be better if I got some grass like the neighbor horses got.

B-  Yeah, it was another round up, Buddy.  All 40 of them got out and took off.  At least until the grass and weeds that bloomed this spring distracted them from their escape. It was pretty easy to convince them to go home and re-hook the panel they pushed open.

R-  I heared you call them bad ducks.  They are horses Beel.  Not ducks.

B-  Yeah Bud, but the tourist season is in full swing.  Ducks is about all I could think of to shout at them that was... okay.  Speaking of bud, grass, weed and tourists, lately we've had dozens of people show up at the lodge looking for the "Bud  Depot" marijuana dispensary.  I finally asked one of them why they thought we were dope dealers.  He said "I have an app on my phone that sent me here."  "Really?" I asked.  "And what makes you think that the app is any less f---ed up than the guy got while he was researching it?"  We just don't sell grass or weed here.

R-  Why would the peoples want to buy grasses?  They grow out of the ground.  You just eat them.

B-  Can't tell you Buddy.  They do seem kind of confused, though.  Maybe I could sell them a zip-lock full of dandelions.  "Here's your weed.  That will be $50."

Email ThisBlogThis!Share to TwitterShare to FacebookShare to Pinterest
Labels: loose horses, R and B, Ranger says

A Day at the Dentist

Well, both of my horses were due for a good dental checkup.  In fact, at last Fall's vet check, doc had made a note that my mare would need some work done this year.  Talk about an understatement!  She has been out-of-sorts for most of this spring; very touchy about her back, giving me grief over any downhill work.  I soon decided it was probably a tooth problem so I made arrangements with the Livery to have the equine dentist/chiropractor (he does both) check her out when he was up here.

So today was the day.  I had made appointments for both of mine, hoping my gelding's teeth wouldn't prove problematic.  He had to have some major work done as a young horse (4 yo) - a lot of filing and a tooth pulled - but has been good since. He's now 13 and has just had the light floats our vet does, about every two years.  Turns out, his teeth were in 'great shape' and the dentist suggested a two year plan.  He does, however, have a cracked wolf tooth (the one he still has), but said as long as it doesn't cause him any problems with a bit, we should just leave it.  He reaches for the bit when I offer it, so I guess it's not an issue and we were doing OK.

Not too surprising that Jesse's teeth didn't fair as well.  She had several hooks and a couple that were keeping her jaw from sliding forward, which meant she had trouble bending at the poll - which is exactly why she was hollowing out, throwing her head up and crow-hopping when I would ask her to go down hills.  We have some pretty steep hills here and this was quite telling, since she is usually great about being a 'mountain goat'.  Other than that, he said she had great teeth and should be good to go.  He did notice though, that she happens to have wolf teeth under the skin.  He asked if I rode in a bit, which I do, but my guys have never shown bit marks on their teeth, so he said if I was ever to go to a harsher bit (why would I do that?) or work dressage, that I would need to have those removed as that pressure could cause enough pain for her to go over backwards on me.  It's quite an extensive surgery and he suggested we not bother for the way I rode.

He uses a light sedation, and the best part was that he was able to adjust her hips while she was more relaxed (he could barely touch her before), so when she came out from under the meds, she had her normal walk back.  It was sooooo nice to see... and actually the really best part was how well behaved both horses were for him.  It always makes me happy when my horses don't give their 'helpers' any trouble.

It was a good day, and maybe tomorrow I can hop on my girl and see if she feels better!
Bionic Cowgirl

B-  Hey, Ranger!  Let's go for a walk.  You had your feet trimmed a couple days ago and the next day you gimped around a little.  Let's see if you're better now.

B-  Juanita is going to walk Reba the lodge dog along with us.  We'll see if the dog is any better at ignoring the BIG SCARY horse.

R-  Ree-bah is a very strange little dog.  Why is it on a rope Beel?

B-  We need to keep her from running off if you scare her.

B-  I am just going to lead you for a while.  I want to keep the weight off your feet til we see if they are okay.

B- Alrighty, Buddy.  We've gone about a half mile, and you haven't tripped or limped once.  I'll just climb on bare-back and finish up this walk by riding.

R-  MONSTER COMING DOWN THE ROAD.  WE MUST RUN AWAY.

R-  MONSTER.  IT IS A MONSTER AND WE MUST LEAVE NOW.


R-   WE MUST JUMP OFF OF THE ROAD AND LET THE MONSTER GO BY.

B-  Whew.  Fine, you jerk.  We're off the road and the truck with the big pipe on it is passing by. 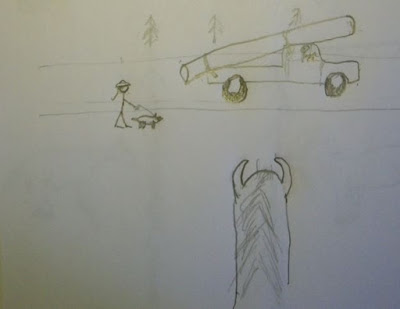 R-  You do not have to worry about Ree-bah being afraid Beel.  She was very brave when the monster went by.