One week ago today, we lost Juanita's mom to pneumonia.  She was 89 years old and was a polio survivor.  A major contributing factor to her death was the terror that "scammers" were threatening her with.

She had polio as a child, and I think that played a major role in making her a strong and self reliant woman.   She went through life looking at what she wanted, and then working hard to make it happen.  She was always a little "close" with her decisions, not willing to share or discuss what she was doing, until she was sure how it was going to turn out.

That made her the perfect target for scamming. 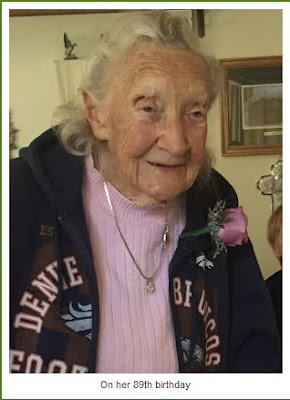 So many of America's elderly are living alone, and doing well.  Except for being a little lonely.  When the phone rings, they will answer and have nice long conversations with the "new friends" that call them.  Every day.  Soon they have given out a great deal of information  to these new "friends".  Soon these friends will have convinced them that their children are not to be trusted, and are trying to get their parent's money.  And speaking of money, here is a fool proof investment/method/lottery that for just a few thousand dollars will get you a return of MANY THOUSANDS of dollars.

You just have to pay the taxes in advance/make the investment/what ever.  Just DON'T TELL ANYONE!

About the time the elderly person figures out that they are being scammed, the tone of the calls changes.  "If you tell anyone, we will kill you and your children and your grandchildren."  "We will burn your house down."  And they do know where she lives because she told them when they were friends.

My mother in law was so afraid while she was in the hospital, she gave up the fight rather than risk going home.  They were going to kill her family.  She gave up and died.

I have no words.

It is time for our government to step up and help us protect our elders.

I would rather have "Homeland Security"  make our parents safe, than protect me from potential roofers and gardeners.

Most of the people I have talked to have stories like this about older folks in their families, to varying degrees.

It is time for a major campaign to end the silence and end the industry that has grown up around bilking our parents and grandparents out of their savings.  Mom lost over $80,000 and her sense of safety.  And then her life.

Ask your parents what is happening.  Check their caller ID logs.  If there are numbers you don't recognize, ask them who is calling.  Tell them what has happened to others.

Tell your story to others.