Yesterday was looking like a pretty good day for my grand daughter and me to take the younger horses out for a ride.  It was cool (30-32 degrees) and the wind was blowing (10-15 mph), but still a good day.

Except that when it's cool, the horses start "feeling their oats" and get kind of bouncy.  And when the wind is blowing, the horses get kind of twitchy.  And then there was a bulldozer cutting a new driveway up the mountain side just a hundred yards or so from the horses corral, that was clanking and grinding and roaring, and the horses were concerned about that, too.

Okay, it was a day it would be stupid to take a green horse out on.  But stupid won't stop ME from doing something I want to do.

After catching Washoe and Alloy, Ranger ran up to me and asked to be caught, too.  Ranger is a lazy turd and NEVER asks to go.  But he seemed to want OUT of the pen.  He pushed his head into me as I tightened Alloys halter.  He REALLY wanted to go. I laughed at him, and we still made him stay, so he went down the hill to the stream and sulked.

The good news is I landed on my feet.  Great 2 point landing and I STUCK it.

I mounted in the dirt parking lot in front of the lodge. Alloy took a couple steps with me on his back one way, then we turned and took a couple steps the other way.  Then he got to the middle of the paved road out front and BLEW UP.  I may have made 2 jumps with him, and then I broke free and sailed off the side and landed on my feet. 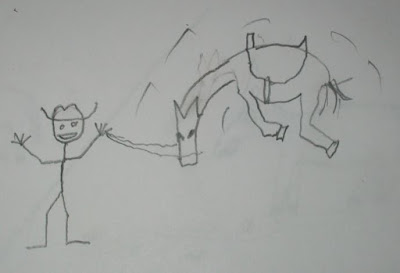 Alloy kept on bucking beside me and I hung on to the reins.  No way I was going to let him loose and get away with that.  No way.  So I clamped my grip down on those leather ropes and HELD ON!  He kept right on bucking and gritting his teeth as he slung his head back and forth...

I feel I must interrupt this narrative to remind my dear readers that even as a small horse, this animal weighs more than five times what I weigh.

He spun me around at the end of the reins and when I finally let go I cartwheeled @$$ hole over tea cup while he continued kicking and stomping every thing in the area.

I was still in the area. 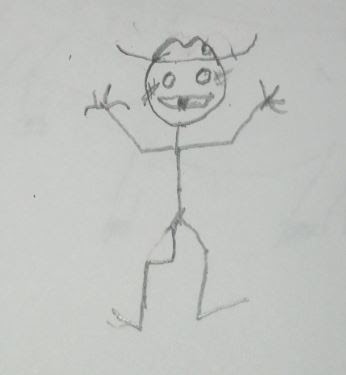 Washoe, the grand daughter and Juanita watched.  I think they had popcorn.

We then went for a very short ride around the parking lot, and I got off and hobbled with him around the block.

As I turned Alloy loose in the corral after the "ride", Ranger looked over at me and said...

"I telled  you that you should take me."

Yup buddy.  Of the two of us, you're the smart one.

Posted by Allenspark Lodge at 9:46 AM 4 comments:

B-  Yeah, you've had your head stuck in that feeder non-stop lately.  You're getting kinda pot-bellied.

B-   Your job kinda changed this summer, didn't it.  I tend to ride Alloy a lot more than I ride you, now.

R-  I have to keep track of the herd now that That Mare is gone.  I must eat much.  And yell when the others leave so they know where to go home at.

B-  That was very sad, wasn't it.  She foundered and was in pain.  The vet and the farrier thought she would never get better, and she'd always be in pain.  So last July, we had to put her down.

B-  When we put down your herd-mate Shadow seventeen years ago, You looked for him for years afterward.  This time I took you over to look at Jesse.

B-  And you never looked for her afterwards.

R-  It would not help.  When they get dead they do not eat any more.  Or be with the herd.  Or yell so I can find my way home.

B-  I didn't show her to Washoe.  He looked for her for days.  I didn't even think about showing her to him. He seems to have stopped looking now, though.  And Alloy, the new horse, never really seemed to notice.  I thought that was odd because she was his first "friend" in the herd.

R-  That Mare always liked dogs and young animals.  Al-thing is both.

B-  Alloy.  And I think he would disagree with your assessment of his heritage.   And you were pretty partial to Jesse when she moved in with us, and she was only 5 months old.

R-  The mother mare was very old and tired.  I needed to help.

B-  Jesse's mom was more than willing to let you take over the raising of that filly.

R-  I teached her many rules.  She did not pee on the food.  She maked all new horses follow the rules.

B-  She would step right up and take over any herd we introduced her to.

B-  Yeah, she was a very good lead mare for the herd.

Posted by Allenspark Lodge at 10:03 AM 4 comments: