R-  Good Beel.  The moose monster has not come back for many days.

B-  Yeah, you wore kind of freaked out about the yearling next to your pen last month.  First you hid behind a fence panel, and then you hid behind Alloy.

R-  I was not hiding.  I could see him better from those places.

B-  You bet.  And the moose got a look at two horses and one 800 pound chicken.  BAUUK-BUCK-AUUK!

R-  You would not have even seen the moose monster if I had not showed it to you. You are not observant.

R-  On the day before this day I wented for a walk with you sitting on me.

B-  Yeah.  It had been MONTHS since we went out.  I've been working with Alloy lately

R-  Al-nuts putted you on the dirt again.

B-  It was very nice you didn't put any of those skills to work on me yesterday.  It was a very pleasant, short ride.  You did quite well for an old guy. 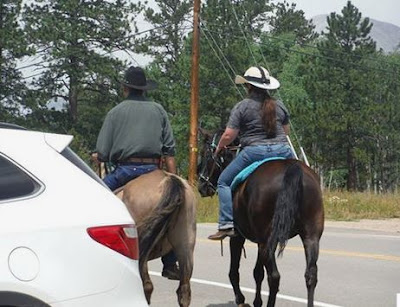 B-  You did break into a trot 3 or 4 times to catch up with my daughter and Skeeter.  But that was mostly because you were poking along.

R-  I was having a very nice walk.

B-  We should do that again soon.

R-  The picnic at the end was a good part.  That is what we should do again. 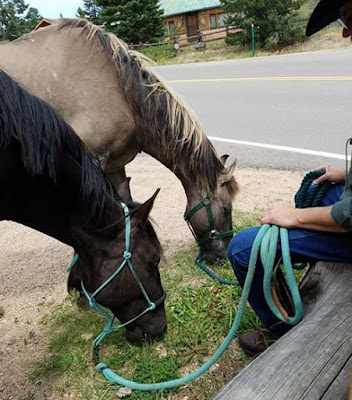 I Can Not Be Taught

Earlier this week Juanita, our granddaughter and I took the younger horses out for a ride.  Juanita was on Washoe, the granddaughter was on our daughter's horse "Skeeter" and I was on Alloy.

We rode out to the little lake with them, let them stand and eat some grass (they had a picnic) and then we started for home.  All very pleasant and uneventful.

While riding back, we were almost home and Juanita wanted to lope a little.   I was in the lead on the green horse, so I trotted ahead for a bit, and then turned to wait for them.  I wasn't too worried about Skeeter and the granddaughter.  Even her trainers couldn't get Skeeter to move faster than a trot.   Washoe loped for a bit, and then he dropped down out of his lope just fine.  But suddenly decided "That was FUN!" and took off again.

Alloy took one look at him and flipped a switch.  "Oh no!  That horse is running from something!" and he started hopping and twisting and two-stepping to get me off, or at least get my attention.

He got my attention.

I rode him out, and as I was sitting on him, still slightly askew,  I hollered "Don't DO that!" and I slapped him on the side of his neck.

I once had a friend tell me "Bill, you may need to find another way to get a horse's attention, that doesn't involve whacking them from behind."

Alloy went into another whole 'nother dimension of bucking and spinning.  I didn't come even close to sitting this one out.  I was off like a wedding dress on a honeymoon, hit the ground like a sack of potatoes and Alloy was heading for the hills.  As I lay gasping for air, Juanita rode up and I told her to send the granddaughter after my horse.

Skeeter loped.  She LOPED!  TWO TIMES!!!  The grand daughter caught up with Al standing on his now broken headstall, and led him back to me as I limped down the trail to go home.  I guess Skeeter just needed to have a reason to run.  Because run she did.

I did not climb back on Alloy at that point.  If fact I still haven't climbed back on him.  I am fairly well weened from the pain killers as of now, but a sudden gasp of pain from me could send him south in a hurry, and I'm not interested in doing that again right away.

"Bill, you probably need to find another way..."  Yup, if I had payed attention then, I would have been better off.

But I can't be taught.  Just trained.

There needs to be consequences. 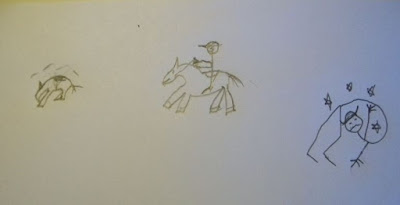