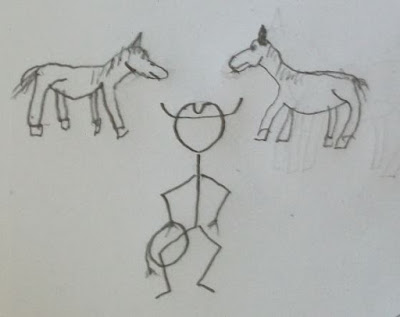 In the Middle of last November, we took our horses down to their winter pasture to run free for a few months.  It's usually a little warmer for them down there, they have other horses to run with, and WE DON'T HAVE TO FEED THEM! (That is a good thing when there is 3 feet of snow on the ground.)

Usually, during the winter, we try to stop and see them at least once a week, pet them, give them treats, and generally keep them used to seeing us and maybe even look forward to it.  This year, with the Covid-19 pandemic, we didn't get to see them NEARLY as often.  And it showed. 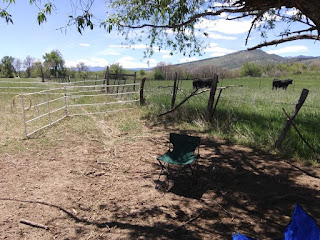 We set up our portable PVC catch pen next to the trailer, and then had lunch.  Almost all of the herd (7 or so horses) showed up to see what we were doing. The bulls left. One of them muttering something like "There goes the neighborhood."  We snacked of sardines and crackers while the horses had carrots and crackers. 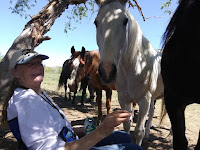 Wow!  This is going to be EASY!  Unless, of course, you touch a halter.  Then it's all over.

Most of them took off (including our two, of course) and started running around the 60 acre pasture, crossing the seasonal river, and circling the area between the 2 ditches.  They would slow down enough that we could just catch up with them, and then they would continue the figure 8 journey.  They could cross the first river, but we chose to use the bridge, which added considerably to our walking. 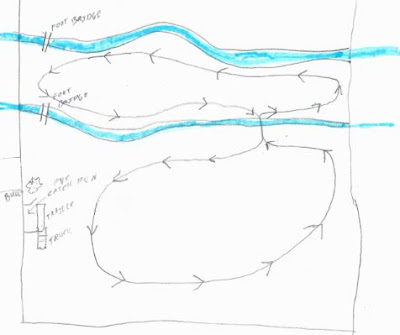 A couple hours into our walk, I changed from a halter to a lariat.  Now I haven't thrown a loop in over 10 years, since I tore a rotator cuff (and I was never very good even before then).  When I tossed the rope over Alloys head, I caught the whole nose, but only one ear.  When he tossed his head to shed the loop while he was running off, a quick loop formed in the tail end of the rope and took part of my left hand with it.  Or tried to, anyway.  Just the little finger.  Not too important compared to the others...

I was glad I was wearing gloves.

I put the rope away, and picked up the halter again.  Just because.

After another couple hours, Juanita said "I think there is some sweet feed in the back of the trailer."  And there was, so we salted the ground in the catch pen with it.  After just a few minutes, Alloy came in to see what the excitement was all about, and (after one of the other horses smashed the fence PVC, you know) Alloy was caught and had a halter on his head.  Suddenly he was a perfect gentleman.  And he walked right into the trailer.

Now to call Washoe over for the trip home.  He's such a good horse.  All Juanita has to do is call him and  he runs right up to get his halter on,

Earlier in the winter, we had the vet come out and remove a growth from his ear.  I don't think he ever forgave Juanita for that.

Another hour running the figure 8, and we finally caught Washoe, too.  Unfortunately, we were on the WRONG side of the river.  Being ever the gentleman, I told Juanita to take the very narrow foot bridge back, and settle my horse who was hollering in the trailer.  I would lead Washoe across the river.

Now I don't think I have told you about this seasonal stream.  The stream over the years has cut a 8 or 10 foot deep cliff walled rut in the pasture.  Just a couple very steep slides into  or out of it.  And the field is on a clay base.  So it is a couple slick slides into or out of it.  I led the horse up to the cut, carefully worked my way down to the stream and looked up at the horse.

He said "Oh hell no."  And spun and ran away. With all of the time we had spent catching the little hay-wrecker, I was NOT going to let go.  He pulled me up that cliff and drug me a little over 20 feet on my belly, face first, until I rethought my strategy. 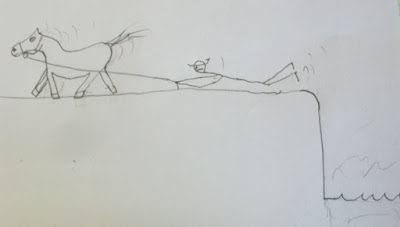 Juanita hadn't gone too far, as she had thought I might need some help, so we caught the horse again in a hurry.  Then we both headed for the river crossing.  She thought she could convince him to walk down with her.

Now, Juanita was in standard slick soled cowboy boots and when she hit the path down... well... have you ever seen the mud-slide scene in "Romancing the Stone"?  Yeah, pretty much.  I was wearing hiking boots, so I got down with her (still holding the horses lead) and gave her a rear end boost to get her back up so she could convince the horse to walk down with me.  Just a couple taps on his rear end and he stepped down, nice as can be, and we crossed the river.

The stream  was only about 20 feet across, but it is a seasonal stream.  We had snow in the mountains last weekend.  Seasonal streams in Colorado are full of snow melt in the spring.  Snow melt is cold.  Very cold.  And the stream is about 3 inches above crotch high.  Guys will understand.  "How they hanging...?"  Nope.

By the time we got up the other side, I was less happy than I had been all day.  Washoe loaded nicely, and I sat on a blanket on the truck seat to keep the leather dry, and my tush warm(ish).

A half hour later we were home, and the horses were unloaded.  When I went back to the truck another half hour after unloading, there were 2 puddles where my feet had been during the drive. 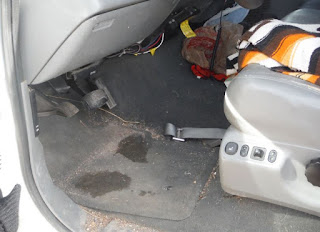 I really am glad the horses are home.
Posted by Allenspark Lodge at 8:28 PM 4 comments: