B-  Aw, come on buddy, you still not talking to me?

B-  Look, Juanita usually gives you your night feeding, and I didn't know the routine.  At least I remembered to feed you.

B-  I said I was sorry.  Juanita had to take a neighbor's horse down the mountain to see it's vet.  The horse broke into the feed room  and ate beet pulp shreds and alfalfa cubes until it "choked", and the whole throat was packed with dried food right up to the top.  It took the vet and Juanita and the other gal 4 hours to clear the pack.  The horse still isn't out of the woods yet, but it looks hopeful.

B-  Sorry-sorry-sorry.   With Juanita gone, I had to feed you in a hurry so I  could get back to the guests in the lodge.  You were only halfway through your beet pulp and senior feed after 10 minutes.  So I just dumped it on the mat for you to finish.  I hadn't realized it was Washoe's job to eat all of the food you leave behind on the mat...

B-  Not real forgiving, are you buddy.

R-  You did it right tonight Beel.
Posted by Allenspark Lodge at 11:13 PM 1 comment:

Pine Grove Cabins: The Back Story

Back in the early '20's,  Dick Isles built a handful of small cabins here in Allenspark.  Several years later he later helped with the Meeker Park Lodge, owned by the Dever family.  Then he built the Allenspark Lodge in '33 and '34 (then called the Isles Trading Post).  I have heard he was a shop teacher, later a school administrator, who brought up high school students to work on the lodge, though I don't know about the crews on the other properties.  Dick ran the properties for over 40 years before retiring.

We have been in the lodging business for over 20 years, so I can say with some authority that he must have been out of his ever-loving mind.  Forty years?  What was he thinking?

The original cabins that he built, named The Pine Grove Cabins, changed hands several times.  The "most recent" sale was to Bob and June W., who ran the cabins for around 35 years.  About 3 years ago health issues forced Bob and June to move back East to live near several of their children.  They tried to run the cabins long distance, with poor results.  Trees were falling and damaging the infrastructure, pipes were breaking (I hate plumbing), and the place was starting to look pretty neglected, but they still had to make all of the payments for taxes, utilities and other "stuff" that goes with owning a property.  And since it was not running fully, the property wasn't going to sell quickly.

So one day, Juanita was talking to a neighbor that cleans and manages cabins in the area and they thought that we might be able to run the Pine Grove Cabins for Bob and June.  She brought it up to me in such a way that I actually thought I came up with the idea.  (Like most effective wives, she's good at that.)

We talked with the owners (who thought it was a great idea), got a contract, and started work.

This was mid May.  And we spent MONTHS cleaning and repairing and re-furnishing the place.  And fixing plumbing.  I hate plumbing. 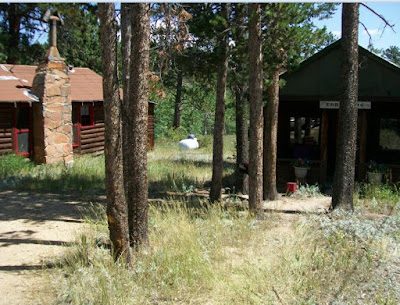 They have all come out pretty cute.  You can see pictures on our website    www.allensparklodgebnb.com  under the "Cabins" menu.

It's far more work than we were looking for, but I think Mr. Isles would be proud.


Bill
Posted by Allenspark Lodge at 7:10 AM 3 comments: