Our youngest daughter invited me to join her and her two daughters for a short trip this weekend. It was Autobot's regionals competition of level 9 gymnasts.  It sounded like a fun 3-generation trip.  Billl was going to drive me down to their house early Friday morning. 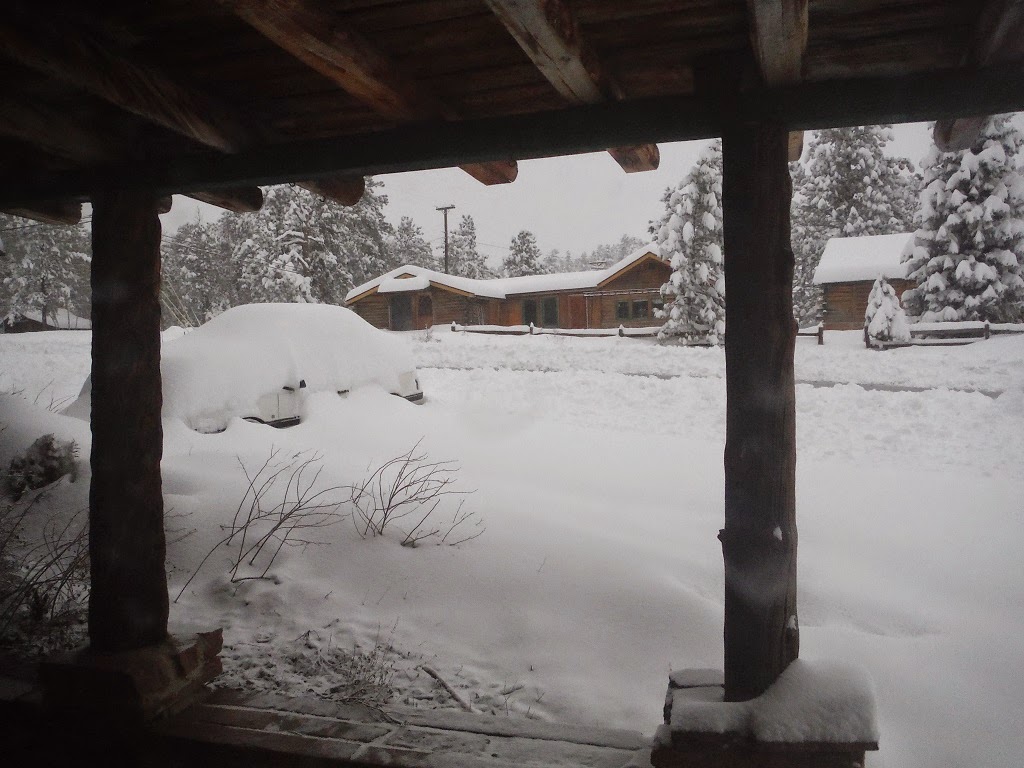 This is what it looked like that morning:  18 inches of new snow.  Bill and I spent an hour shoveling to locate the car; shoveling to feed the horses; shoveling for guests who were booked that night.  Good exercise, you say?

Us girls finally got on our way just to discover we were in the midst of a huge traffic jam outside of Denver.  Due to poor visibility - which had caused several bad accidents - the highway we needed was closed and traffic was being routed around in circles!  We weren't allowed to continue east, and after being sent back west, were told we could not get back to Denver.  Thanks to having traveled some of the back roads in that area to visit a friend who used to live there, I recognized one of the county roads.  We headed south, picked up a road going east and managed to skirt the whole mess, returning to I-70 about five miles later.  We continued on our way for a great drive. 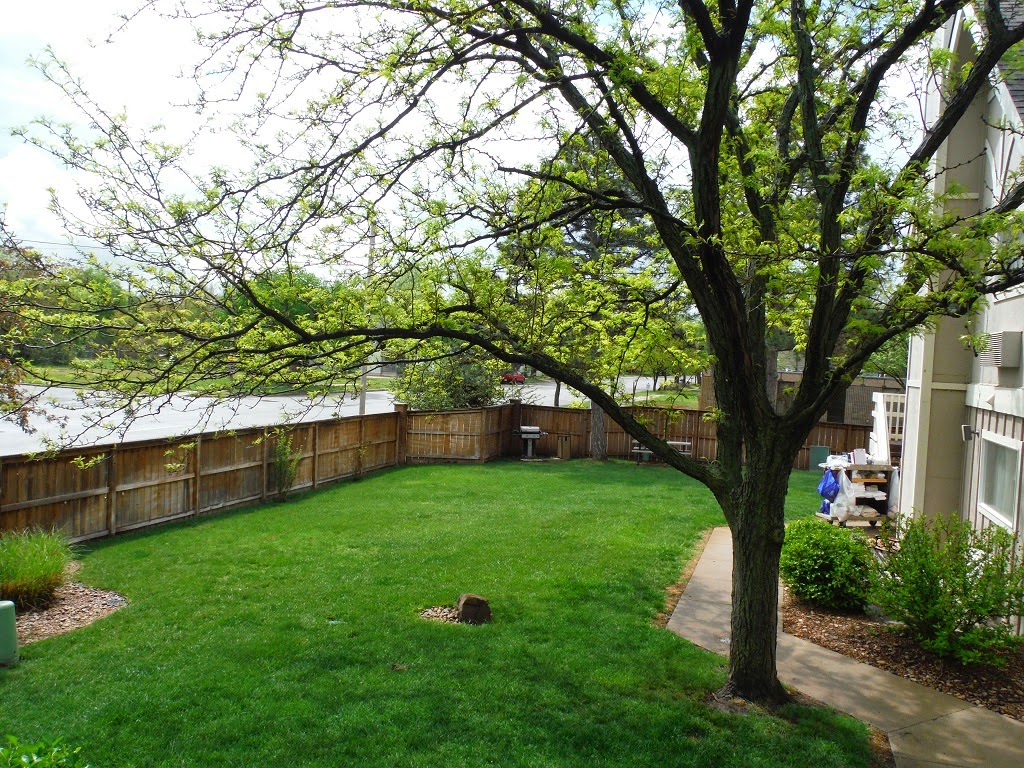 This is where we landed in Wichita, KS.  Sure looks different!  It was a condo complex converted into 'hotel rooms' - a very nice place to spend the weekend. 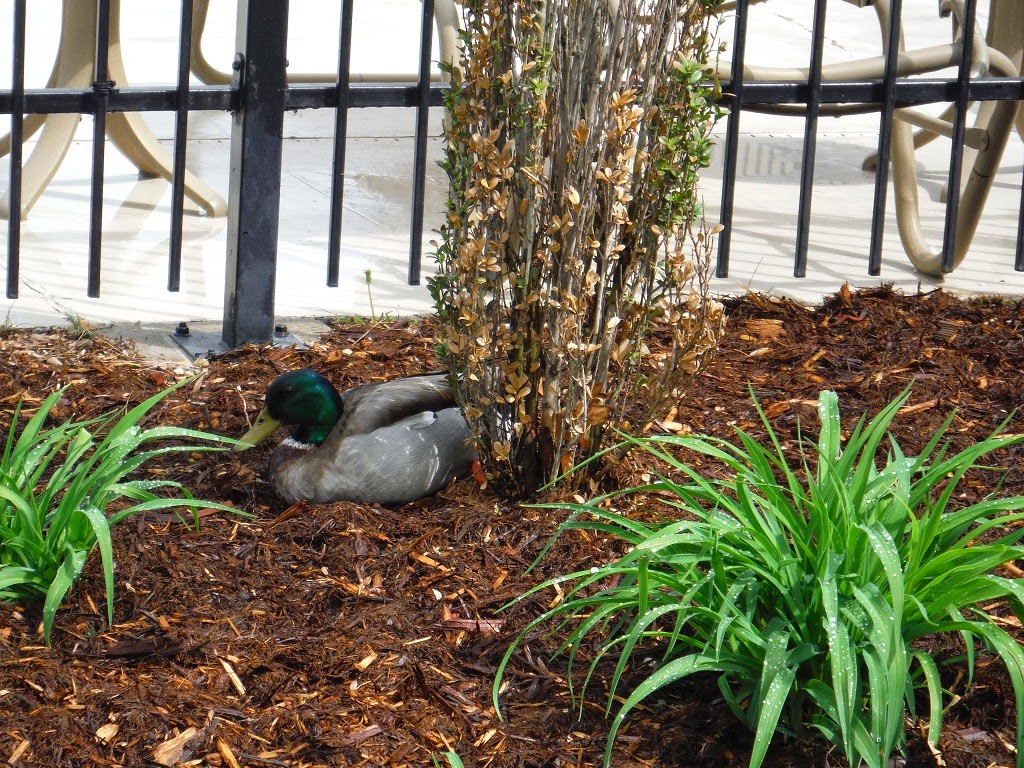 Granddaughter Asset located a new friend, Jack (alias Flappy).  When we arrived he was inside the pool area standing very awkwardly.  Turns out he has a broken leg, which does not deter him in the least from his normal routine.  A lady Nebalie spoke to said she had worked there for 10 years and two ducks, Jack and Jill came every year.  They laid eggs at the river and took turns 'babysitting' them.  She didn't know how Jack had gotten injured, but hoped he would survive.  Asset did her part by toasting Jack a piece of bread every morning.

It was planned to spend the day at Cowtown Living Museum on Saturday, but when we got there it was pouring down rain, so we opted to wait until later.  Asset and I stayed at the hotel while Nebalie and Autobot went to the meet to watch a team mate compete.  Three members of Autobot's team qualified to attend this meet; quite an honor. 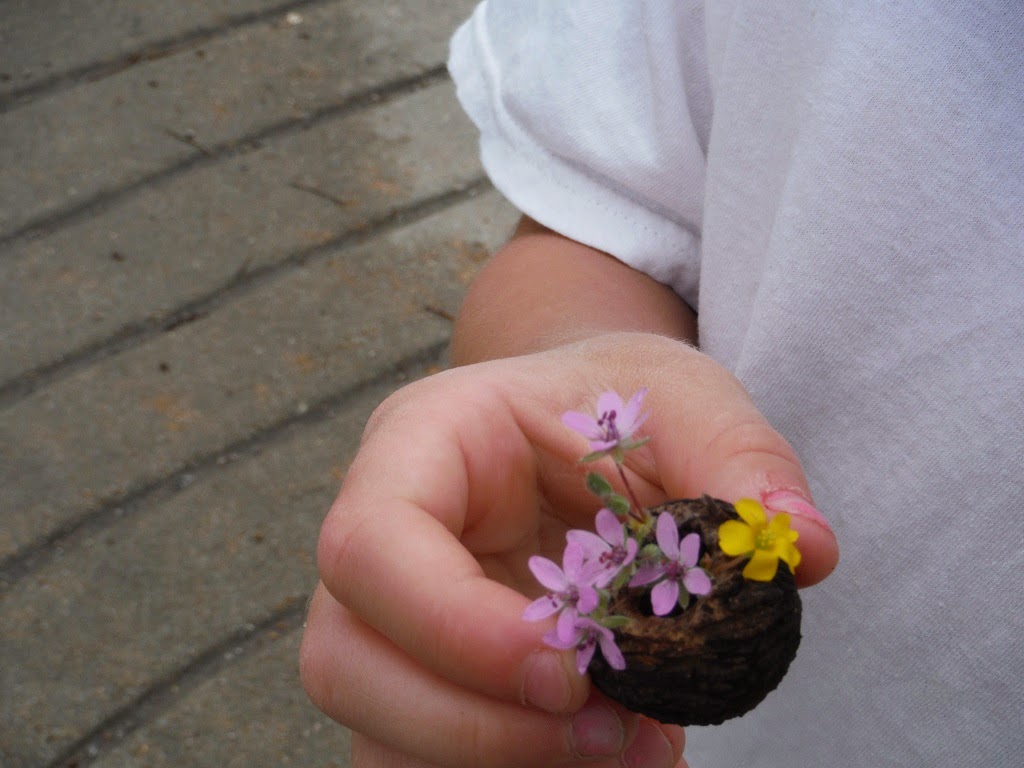 Asset and I walked around the neighborhood when the rain quit, puddle jumping and various things.  She started noticing the tiny, tiny flowers that were popping up and wanted to make her mom a bouquet.  She also found a nutshell to use as a vase.  This child is quite the problem-solver. 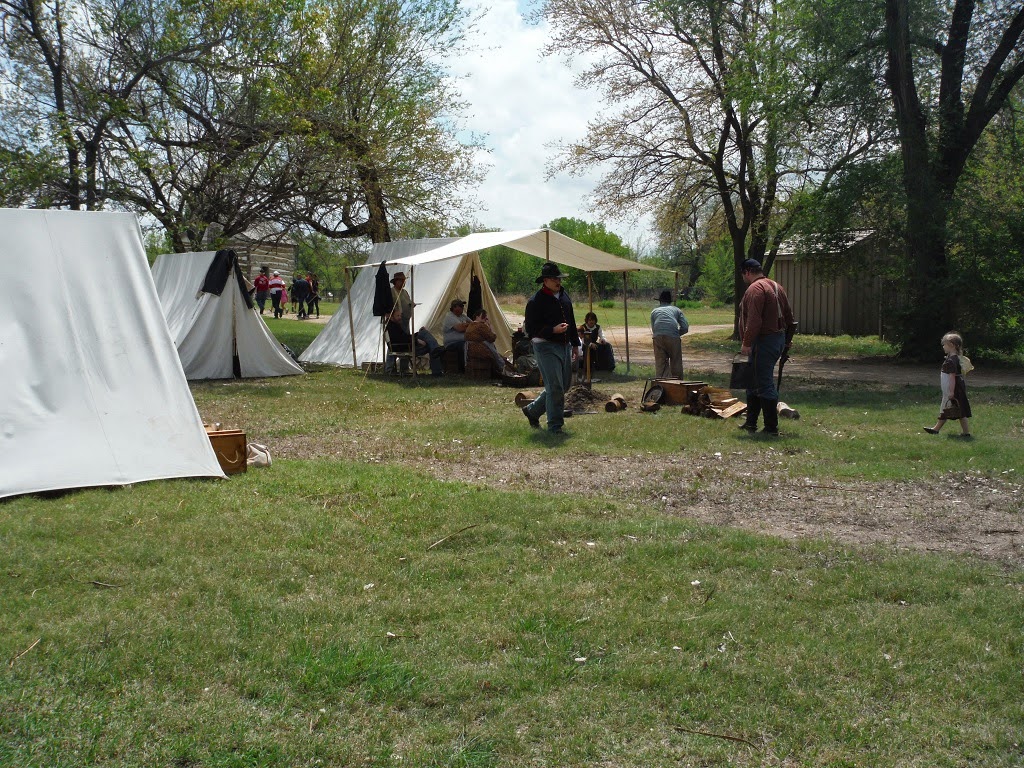 Finally made it to Cowtown, a living museum, meaning you literally walk into the life of the people living in that time.  This was civil war reenactment weekend, so soldier's tent cities were set up in several locations, with women tending cooking fires, men cleaning weapons, and kids playing various games of the time. 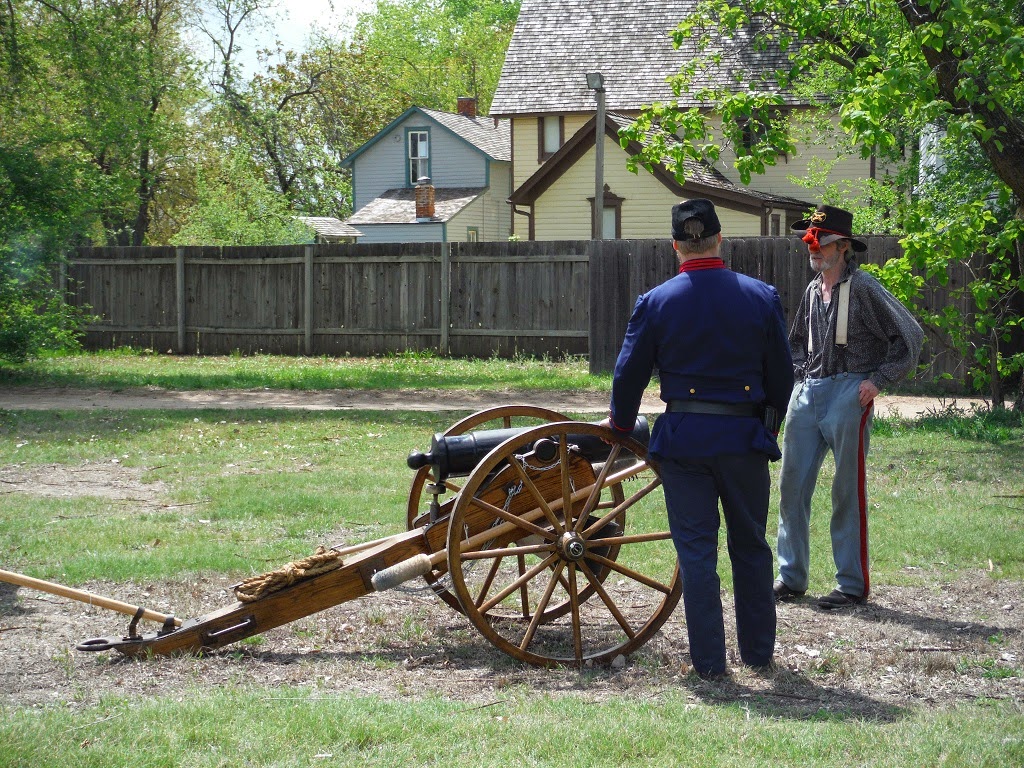 Two 'enemies' discussing the working of the cannon. 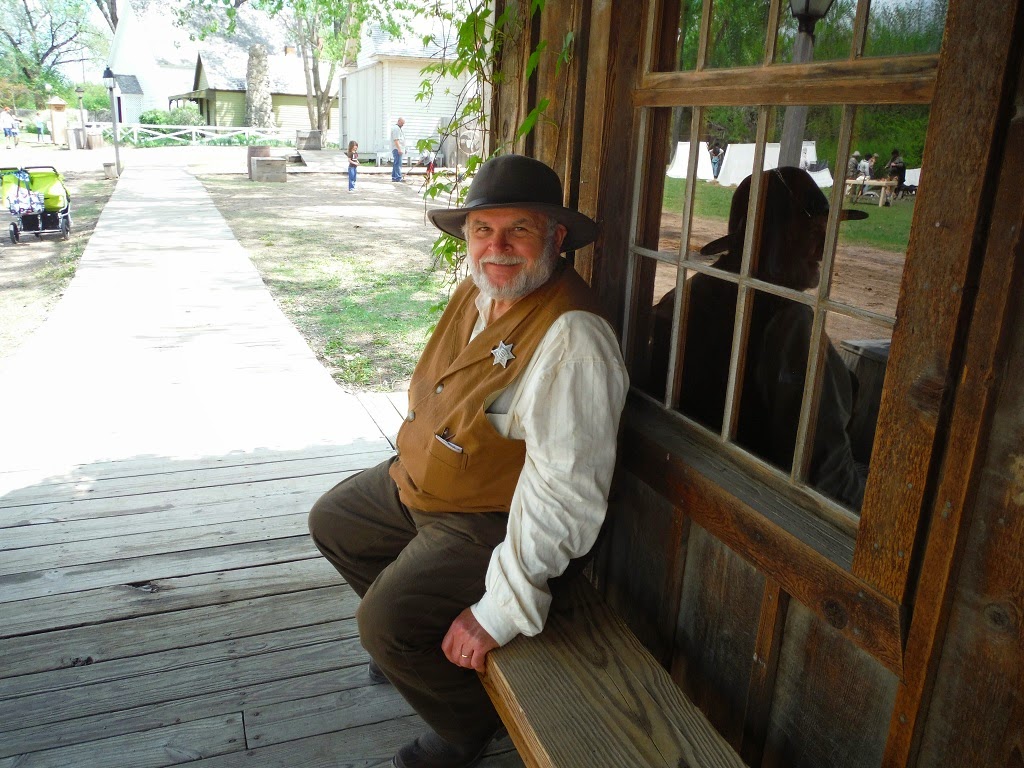 Several people were teasing this sheriff about his hard job. 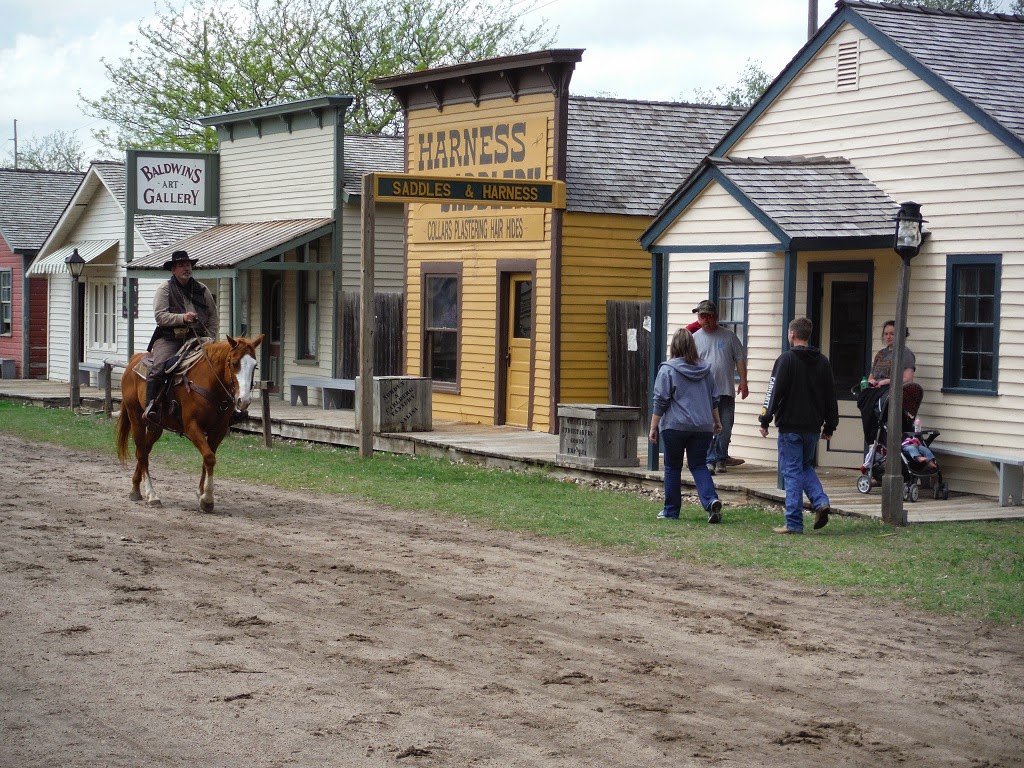 Apparently it was this one's turn to patrol.  This was the complementary horse; an 18 yo who worked the museum a couple times a week.  His owner said he enjoyed it, especially the end of the day/dinner time when he got to graze on the grass at the edge of town. 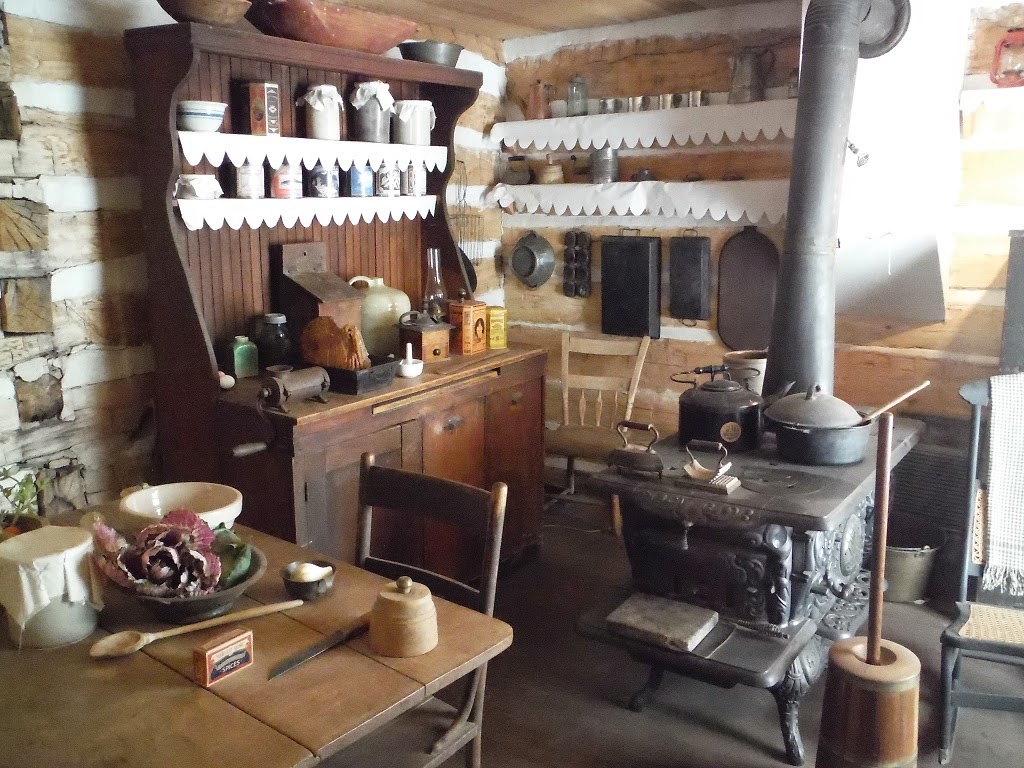 You were able to walk into most of the buildings.  This one was the first house built in Wichita and reconstructed at the current location, then set up like it had been.  It was used as a bed-and-breakfast, with the guests staying in tiny rooms upstairs.  It's a lovely wood stove but glad I don't have to cook our breakfasts on it. 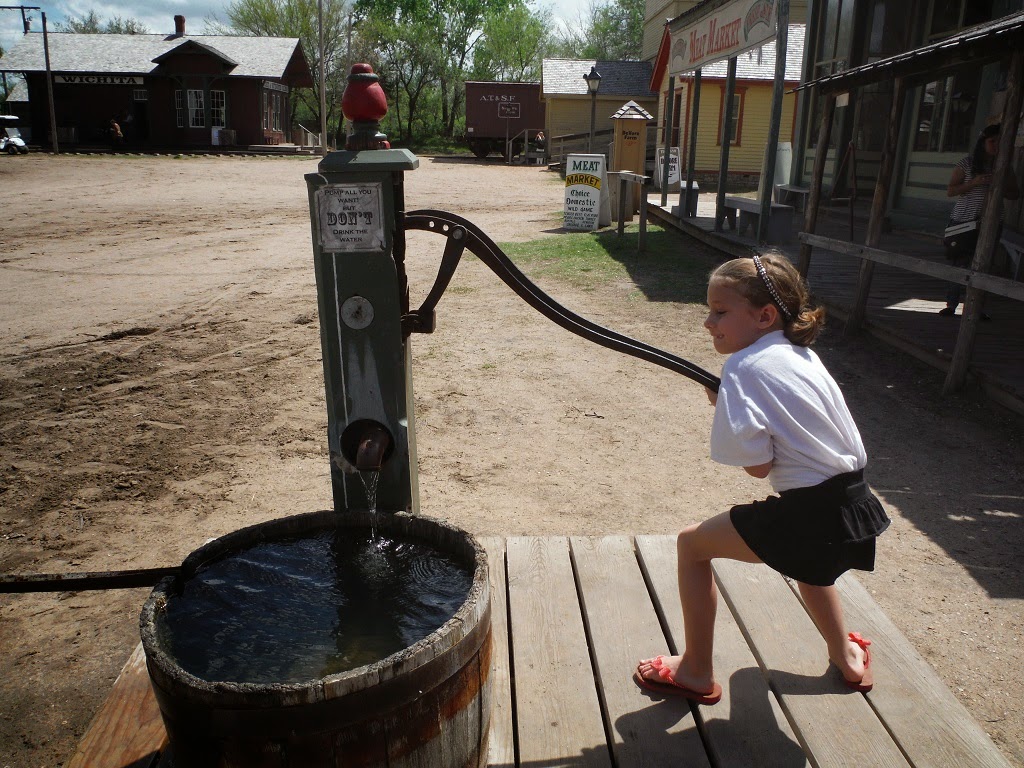 In the late 1800's the town had a pump in the middle of town for water.  Asset learned it took a special technique to actually get a trickle of water; she decided it was hard work. 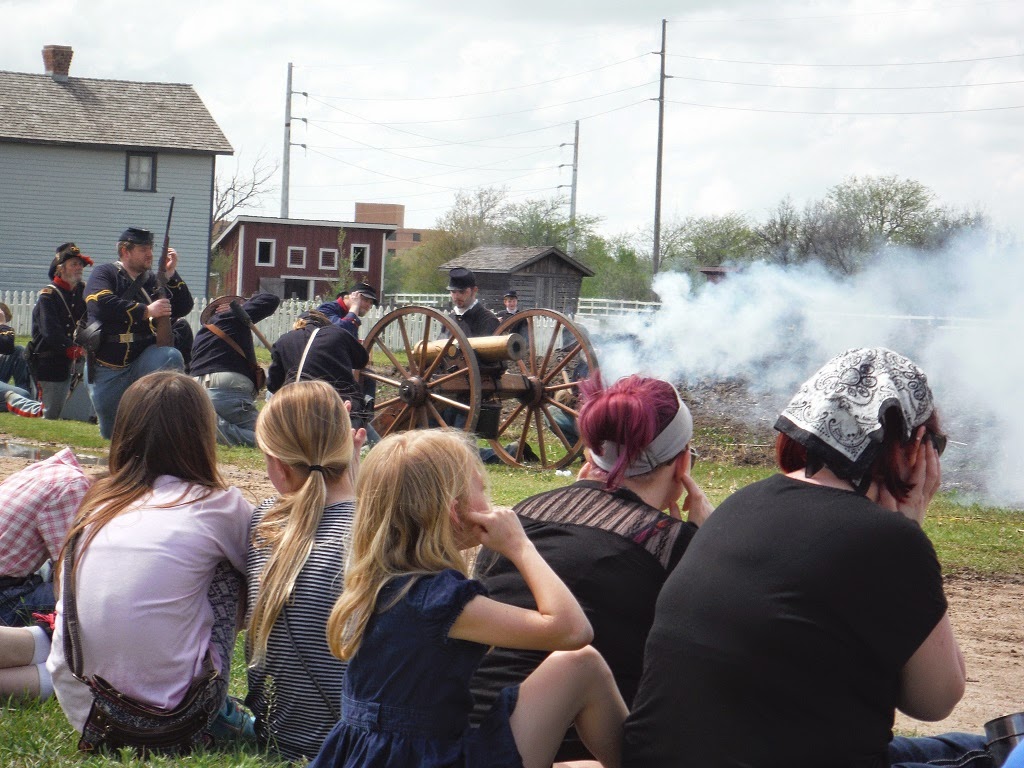 Show time!  The cannon has been moved onto the battlefield and we get to see it in action - a noisy thing it was. 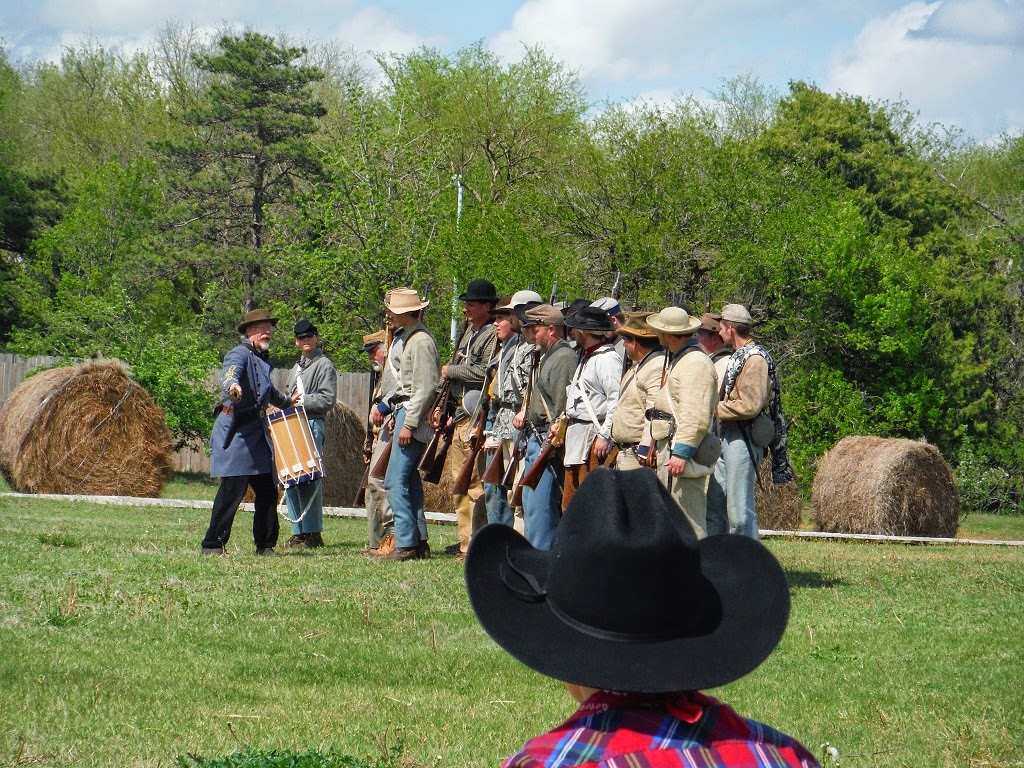 Here come the opposing soldiers.  They spend a good deal of time firing from behind a row of logs, but when it looked like they were making progress they started moving forward as a group, kneeling down to fire their weapons, then moving forward again. 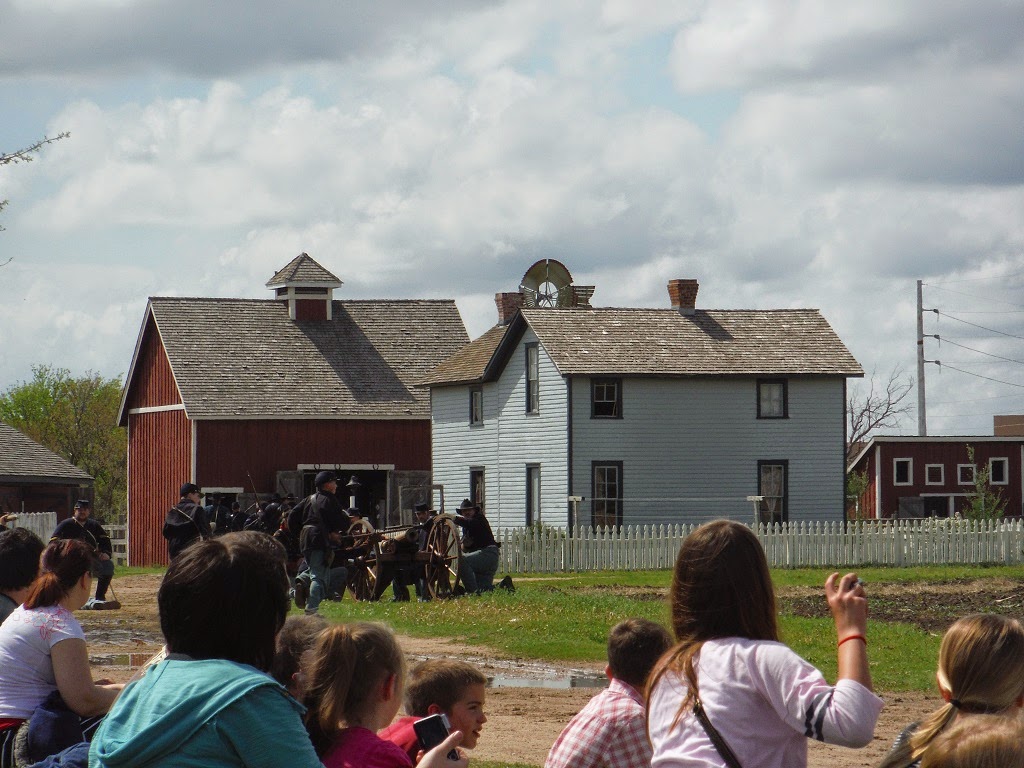 Here's the cannon again as it is moved back toward the farm houses.  These guys had been firing from  behind a couple of large dirt burms and got routed out.  I didn't quite understand how it was safer firing from behind a large fallen tree than dirt mounds, but hey, it was a re-enactment, right?  My days of cowboys-and-Indians or war games came a little later in history, when better strategy had been developed. 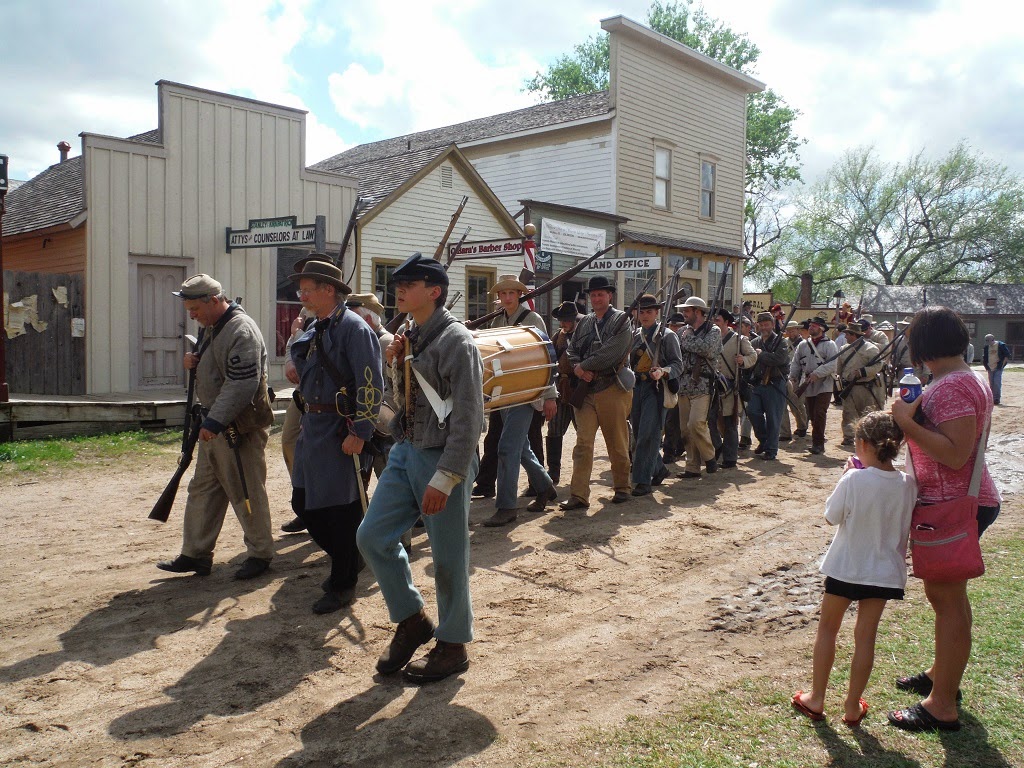 Of course, you have to have the crowd cheering on the winning soldiers as they march through town.  I do have to say they play fair; the opposite side had won the morning battle. 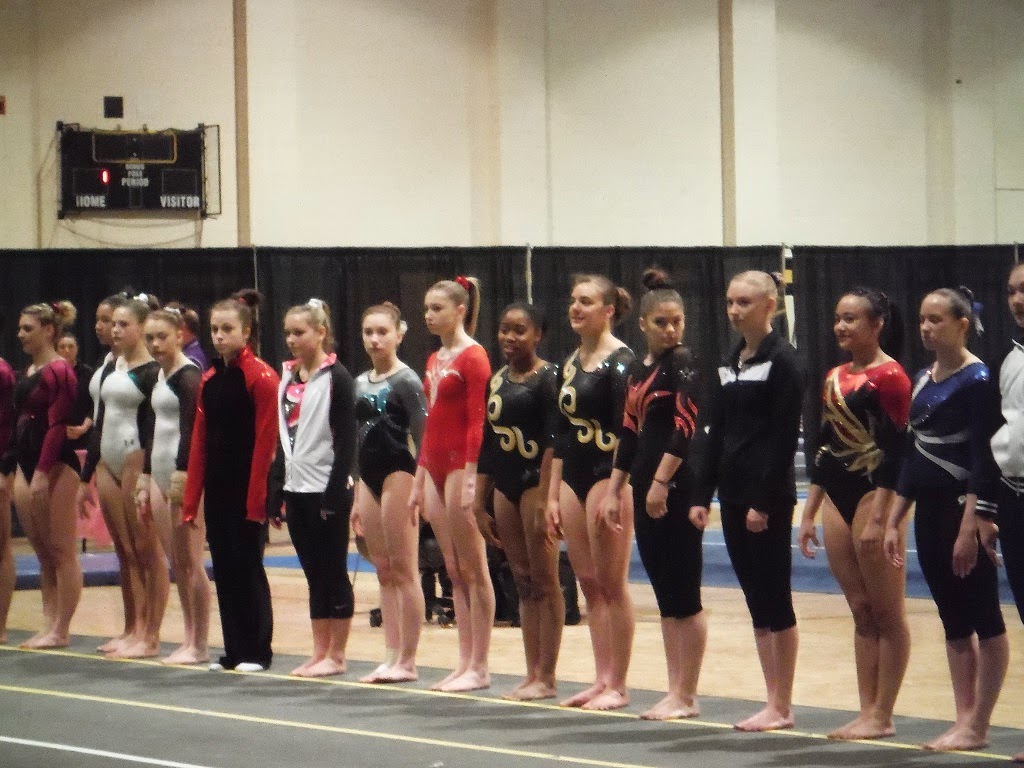 Here's the real reason we were in Wichita - the Level 9 Regional Gymnastics Meet.  Girls from seven states all lined up (this is maybe 1/6 of them), and this is the last of three sessions.  Autobot is about midway, with the turquoise on her leo.  To qualify, they each had to accumulate a certain number of all-around points at their respective state competitions. 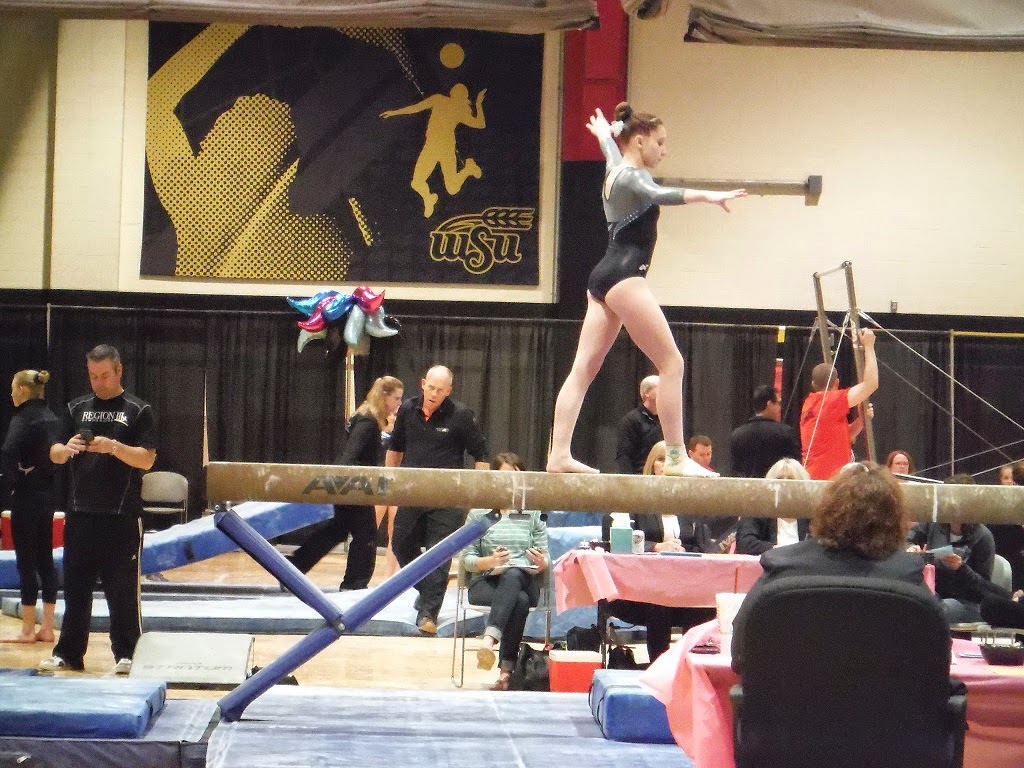 Here's our girl setting up for her spin on the beam.  It's the only shot I could get to turn out.  It was not one of her better meets, but she put forth a valiant effort against awesome competition.  To make it this far the first year of competing this level is pretty awesome in itself.  We are very proud of you, Autobot!!!

R-  Hello Beel.  Waneeta is not feeding me again on this day.

B-  Yeah Ranger, she's in Kansas at a gymnastics meet watching one of our granddaughters compete.

R-  I do not know jim-nast-ticks.  But I know can-sass.  Food grows out of the ground there.

B-  Yes Ranger, I shaved off my new beard.  Too much itching going on.

R-  You should stand next to a herd member.  Sometimes they will bite you where it itches.

R-  Did you have jim-nast-ticks that made you itch?

B-  I know what you mean, Ranger.  That is one of the good things about the springtime two foot snow we got this week.  Fewer bugs.

R-  And if she stands next to you remember to bite her. 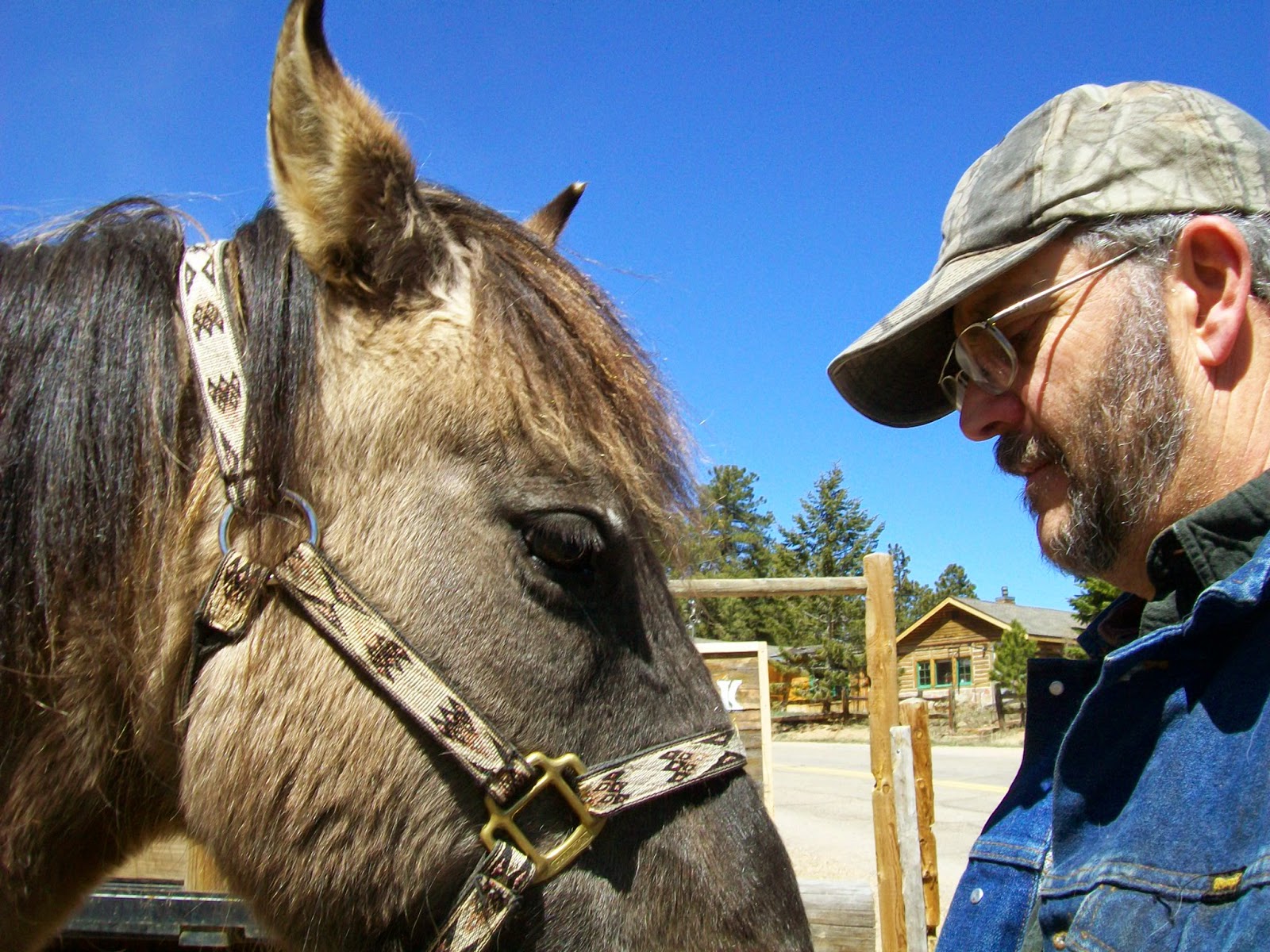 It's been 12 days now since I installed the hay net and wow, what a difference.  They now consume about 1/3 less hay than 'before net'.  Our bales weigh between 40 and 50 lbs mostly, so for three thousand-pound animals (average of the three) they should consume 45 - 60 lbs of forage a day (one bale), depending on their work schedule, which right now is very slight, although they are out 24/7 on a dry lot of about 1/2 acre, so they move around quite a bit.  I used to have to feed 1 1/2 bales a day to keep them even slightly happy.  Now one bale in the net usually still has a little less than a flake in it after 24 hours, and they seem more than satisfied.  It also looks like they are beginning to drop a little weight, which is a good thing as they came home too tubby.  Besides, the more weight Jesse puts on, the crabbier she gets.  She is way happier slimmer (aren't we all?).

The biggest drawback for me so far has been handling the net when it is wet and below zero.  The cinch and rope are still easy to handle but you freeze your fingers.  Bill found me some very slim waterproof mechanix gloves to try, but it hasn't snowed again yet.

Give haychix.com a look see.  They come in all sizes.  I am already considering a couple travel ones for the trailer because I don't like all the wasted hay on the floor at the end of a long day of travel, plus when we get to our campsite, we can just toss the pre-loaded one in their corral and know it will get them through the night.

This will probably be the last update, unless something truly devastating happens this summer, but I can't imagine what right now.

We have some friends who are moving away - job reasons - so we had a quick get-together planned for today.  Her parents had flown into town for a few days because ... well, there is a new baby in the family.  Since the parents are also friends of ours, they came up the mountain for a visit and brought little Reese, the 2 1/2 week old little girl.  After having lunch together I was informed that Reese needed her first ride!

Now E. knows my horses really well.  In fact, she had spent several years starting young horses and she had helped train Washoe, my gelding, so when she said Reese needed a ride, I can't say I was too surprised.  The day was beautiful; sunny and bright, just a bit breezy, and in the low 50's.  Still a little snow on the ground from our new foot just two days ago, but mostly melted.

I took a halter to the corral and called Jesse; told her she was getting brushed because she had to give a baby a ride.  She knows 'brush' and she knows 'baby'.  Boy, did the ears come up and she stood at rock solid attention to get groomed - and we were ready for a photo op. 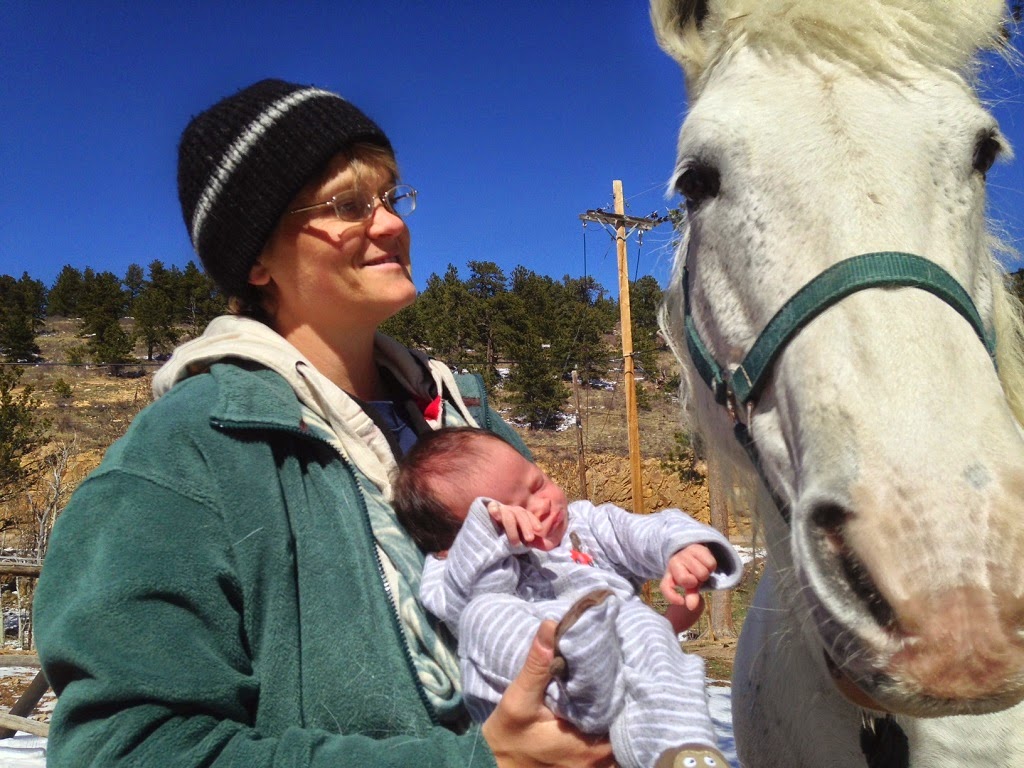 'That's baby?  I was thinking bigger." 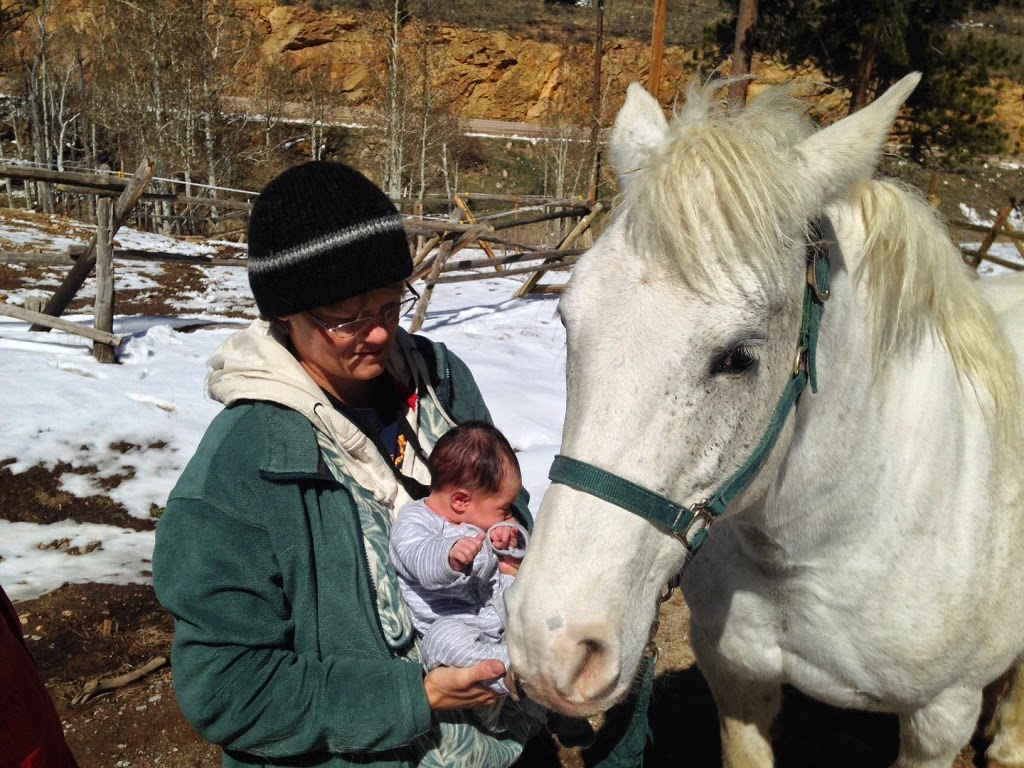 Better take a sniff here and check this out. 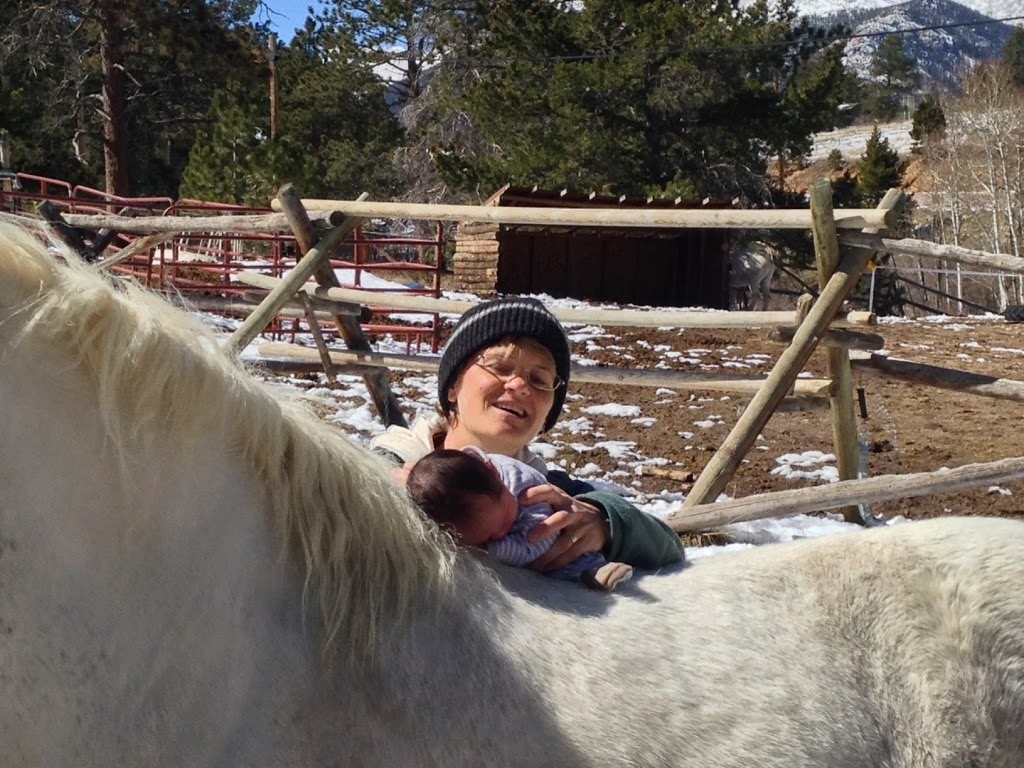 Reese just snuggled right in and fell fast asleep.  Bet she doesn't remember her first horse ride.  Wish you could see the other side.  Her little fist had latched onto a piece of mane and right after this picture she sort of stretched out and really crashed.  Must have been the warm sun and all that warm furry back. 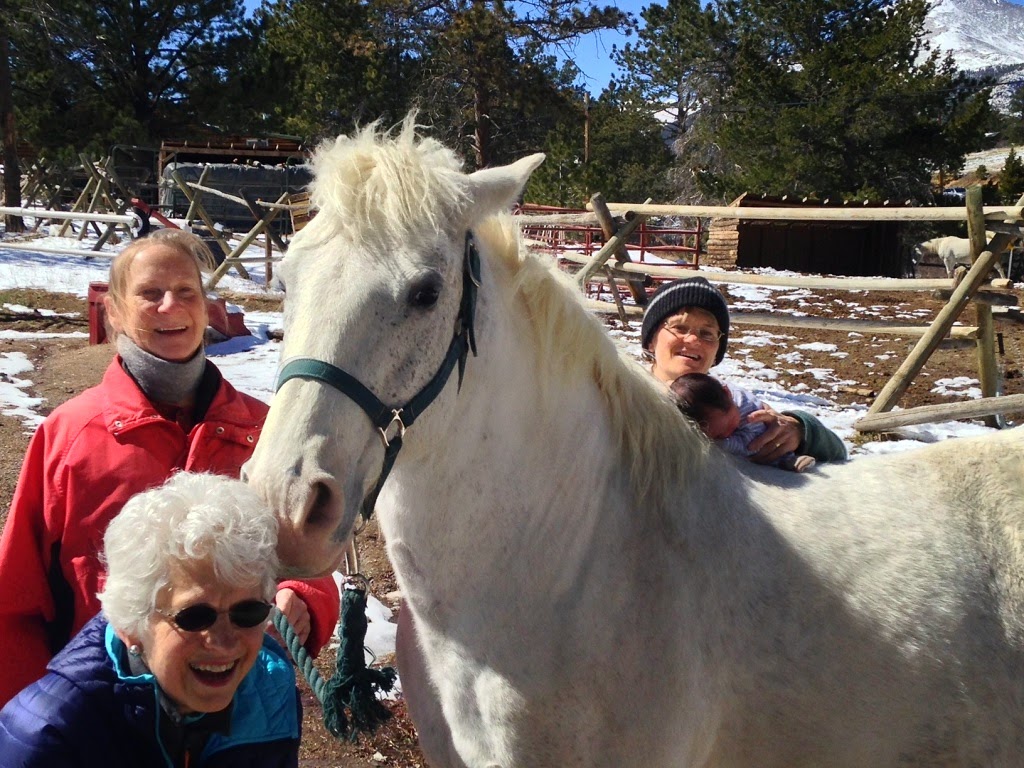 "What do you mean, put my ears up?  There's something on my back so I can't move and Grandma's hair is tickling my nose!"

What a good day.
Bionic Cowgirl