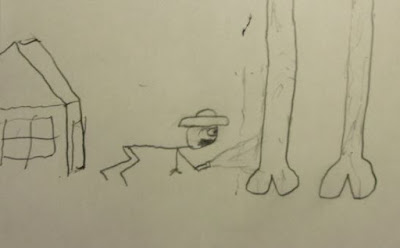 Soooooo .... we have actually done some really fun stuff this summer with the horses, the last of which was an obstacles clinic with our favorite Mustang trainer, Jessica Dabkowski at Two Spruce Farm.

The owner, Jody Marken is also very knowledgeable and was a huge help teaching me to slow down and learn how to move your horse 'one step at a time'. It's a lot harder than it sounds.  It's much easier to ask your horse to move in any given direction and have them move three, four or more steps, than it is to have them just move one foot, one step.  Try it. 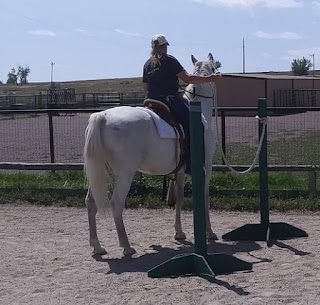 Here Washoe and I finally did the gate correctly, by doing it in one step segments.

Bill sat this one out due to a migraine, then ended up being the photographer, getting some pretty great shots.  GunDiva daughter, Miss LE, and I all had a great time challenging ourselves.  As Jessica and Jody kept telling us, it wasn't about the obstacle, it was about the communication between you and your horse. 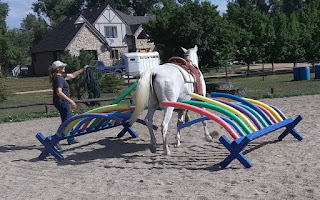 Since my horse is pretty great with true trail obstacles, once he understood these were just funky items to play with, we first practiced 'sending' our horses through on their own, then having them stop in the middle of one, or even trying to have them do something on 'just a thought'.   Later I rode Washoe through this particular obstacle, and asked him to stop in the middle.  He did .. then reached down and pulled the yellow noodle off with his teeth and spit it on the ground.  Challenging our communication with them on a large scale - in both directions. 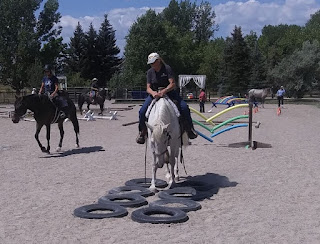 Another fun one.  Washoe couldn't decide if he was supposed to step between the tires - or on them.  After this he totally ignored them and just walked all over them, stepping wherever, and even just standing on them. 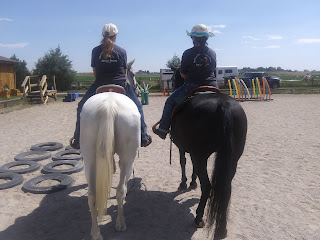 Turned out GunDiva and I wore the same shirt that day, making us 'twinsies' according to her.  The horses standing together remind me of the Beatles' song Ebony & Ivory. Dating myself big time here.

Right now, plans are to haul our horses over to Estes Park at the end of September to a Mustang challenge there, happening after one of the TIP auctions.  So we brought our daughter's horse up here until then, so we could practice together on some maneuvers, such as side-passing over a log, backing through poles, and opening gates.  Today, I decided to ride her horse just for fun; Washoe's nose was definitely out of joint, until I put Skeeter away and climbed on him.  Both horses did very well, although they are worlds apart in their training. 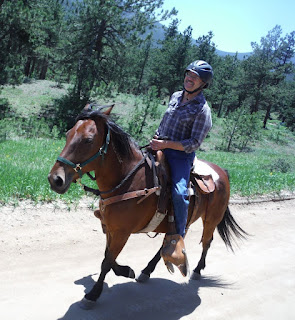 Bill and Alloy had a great day today, too, making it about 17 rides or so this summer with NO BUCKING!!!  They seem to have had a great breakthrough in the communication department, mostly Al deciding he could discuss things with Bill without yelling (bucking).

The lodge is running as well as can be expected with all the virus confusion and variants, so we are happily enjoying any spare time we can get with the horses. 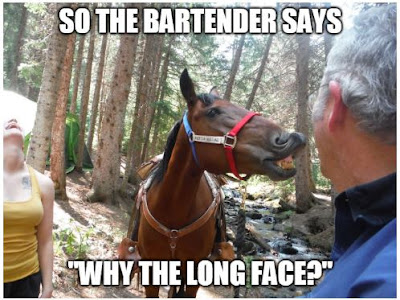 Juanita and I have been riding 2 or 3 times a week for the last month.   Her horse Washoe has been behaving himself (for the most part.  Just occasional snacking on the trail.) And Alloy hasn't dumped me on the ground so far.

I really hope I didn't just jinx it...

This spring has had it's normal pollen season that seems to be just about over.  Riding down the trails, if you bump a tree limb the yellow cloud poofs down around you.   It kind of cool looking.  But the pollen does settle down all over everything.

One of our guests came in and told me about some prints on the back of her car.  The pollen was acting like fingerprint powder and showed everyplace the car had been touched. 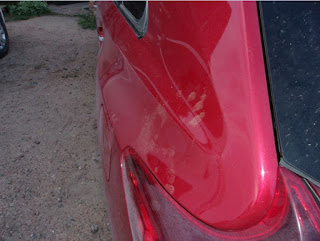 For reasons I do not fully understand, I decided to "roll" my face across the back window.  The next morning, THIS showed up. 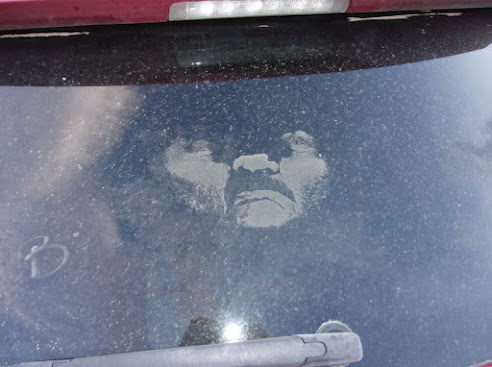 I find it to be equal parts cool and terrifying....