Yesterday was our scheduled day to release the horses for some winter pasture fun.  We were fortunate enough to actually find a really nice sized, treed, mountain side for the gang to hang out for the next 4 - 6 weeks.  But a certain Beel kept dragging his feet about bringing out the trailer.  When asked what the problem was, he said, "I really want to go for one more ride on the mountain."

"It's sunny, but there is a darned cold wind out there.  Are you sure?"

Then .... today we loaded up the whole crew of four - Ranger, Jesse, Washoe, & Estes.  We discovered that by removing the stall separators in the trailer, all four could just walk right in and stand side-by-side without even being overly crowded; certainly nothing like the sardine can situation that happened when we used to put our three horses in a two horse straight load.  And off we went for their new adventure.  They have never been in this area, although it is mostly across the road from another one they liked.... and only 15 minutes drive time from us, so we can hike in to see them weekly (or more).
It became obvious pretty fast that this was an acceptable area .....
We couldn't leave without giving them a good-bye treat.

Have fun guys.  I miss you already!
Bionic Cowgirl
Posted by Allenspark Lodge at 10:26 PM 9 comments:

When any of our guests here at the lodge ask me what I did before we bought the lodge, I tell them I played the piano in a bordello. 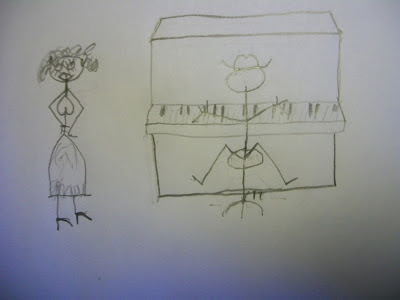 It's just too embarrassing to tell them I repaired computers for a living.

When we came up the the lodge, the new great system was Windows 98.  And I haven't touched the inside of a computer since.

I think the kids feel I have fallen out of touch with the high tech world (the only text message I have sent was the letter "A" to my friend Amanda, by accident).

Well, I am going to prove them wrong this Christmas.

I braved the BLACK FRIDAY crowds today to pick up something for the four of them.  These are things  I have been hearing them (and many others) talking about. I don't fully understand why they are such a big deal, but who am I to judge. 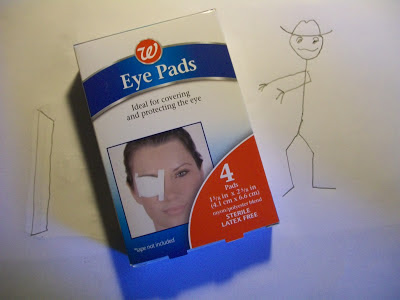 They are going to be AMAZED!

Email ThisBlogThis!Share to TwitterShare to FacebookShare to Pinterest
Labels: I crack me up

A group of folks came the the door this morning while we were cleaning. One of them asked if she could show her visiting friends the lodge because she had been talking about it for years to them.

As they were coming in the door the neighbor's German Shepard, Ingrid, came running up. I hollered at them "DON'T LET INGRID IN!!"

All of the people came in except for one lady who stood on the porch with the neighbor's dog, looking hurt and bewildered. I said "Come on in." again.

"But I'm Ingrid." she responded.

Email ThisBlogThis!Share to TwitterShare to FacebookShare to Pinterest
Labels: stories I love to tell

Earlier this week, Juanita and I hiked the Hall Ranch open space with a friend.  Almost the whole walk we were wishing we were there on horseback.

We went with Compass, the gal that runs the livery across the street from the lodge.  Ranger, Jesse and Compass' horse Cinchy were the designated modes of transportation.

Cinchy is one BIG mare.  Ranger and Jesse were very polite the whole trip. 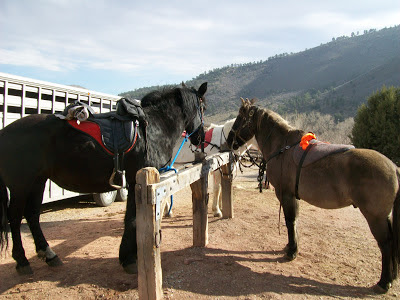 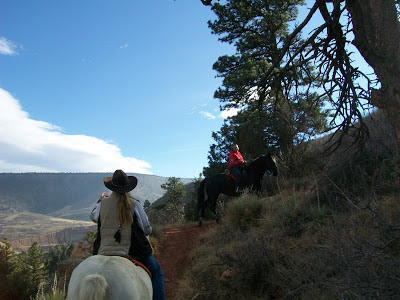 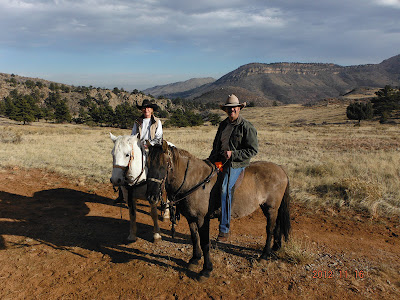 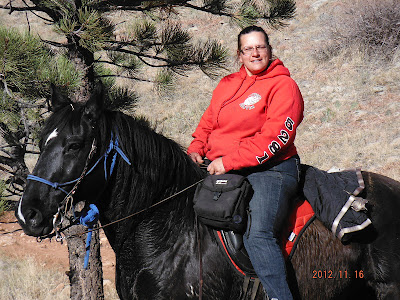 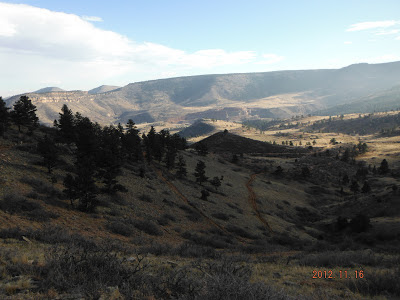 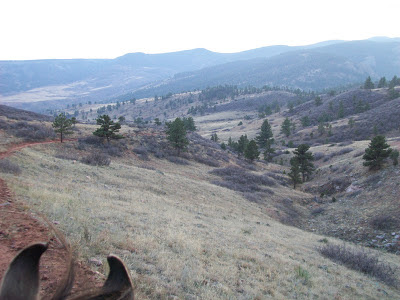 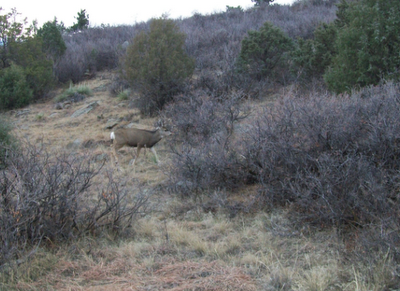 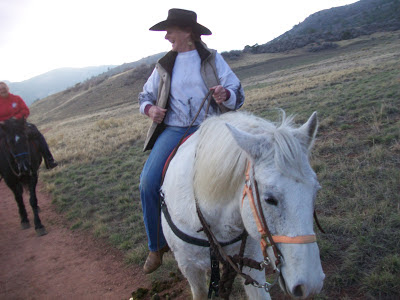 Bill
Posted by Allenspark Lodge at 8:41 AM 4 comments:

Bill had an old school friend come to visit for a few days, so we decided to go hiking - at Hall Ranch, an old favorite riding place of ours.  It was cold and windy up here so it seemed 'proper' that we pick a lower location, and it was indeed warmer and less windy.  We were able to hike in shirt sleeves; the temp was 47*. 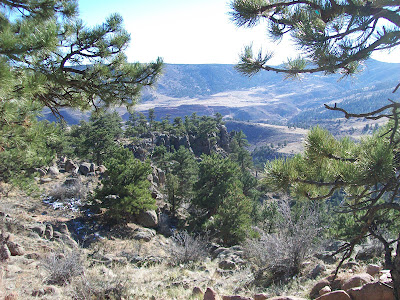 We chose a different trail than we had ever been on, since we weren't on horses, anyway.  Lots of fun new scenery and the footing was great.  Of course, I kept thinking, "If only my horses were here!"  We chanced on deer several times, in groups of three to six. 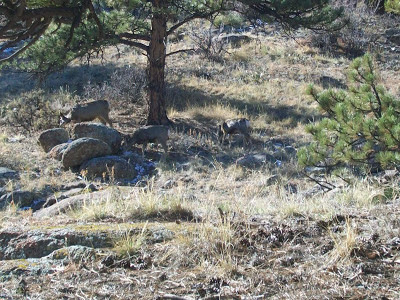 L. really wanted to see if the Black Tailed Groundhogs were still in the higher meadow, so that was our goal.  We found the Groundhogs, but all signs about their type have been removed and they don't look true to the species any more.  We think some locals probably moved in and it's now a 'mixed race'.  They were fat, plentiful and happy looking, but only had a small black tip on the end of their tail, instead of a completely black tail. 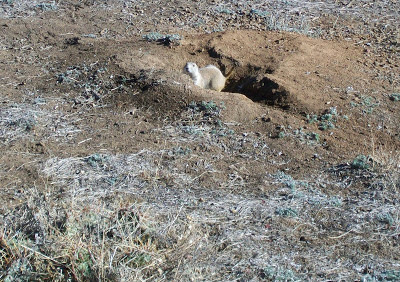 We came across a couple more groups of deer and on our way back we found rabbits... 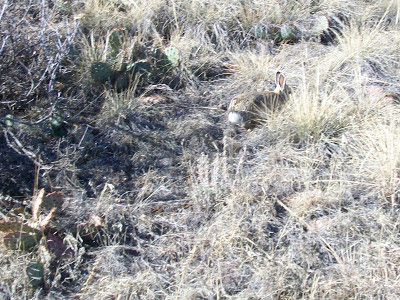 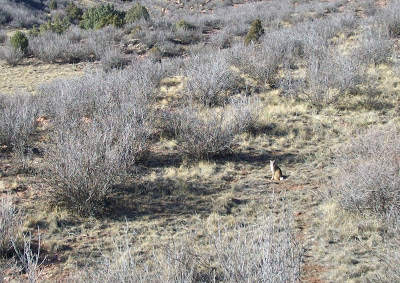 ... a Bobcat.  Actually, there was a pair of them; young, big, and fat.  They were beautiful!!!
Another hiker ahead of us was signaling to us; thinking he was seeing mountain lions.  We explained they were Bobcats, but he was still pretty excited...and so were we.
Bionic Cowgirl
Posted by Allenspark Lodge at 10:31 PM 1 comment:

Email ThisBlogThis!Share to TwitterShare to FacebookShare to Pinterest
Labels: hiking, lived to tell the tale, trails

It has been brought to my attention recently, by our own daughter, GunDiva, that upon occasion we can treat friends a little 'mean'.  In October, a good blogger friend was kind enough to bring her husband and young son to the lodge for a visit.  We also had a group staying at the lodge, so GunDiva planned the recreational activities - mostly.  I decided that she, Rachel and myself needed a 'girl's ride', and that since we knew Rachel rode bareback at home a lot, it would be OK to hop on sans saddles and hit the hills.  Now three years ago, said girl had come to Colorado for our first High Country Rendezvous and got drug all over trails much more 'difficult' than those to which she was accustomed, which she attested to later by referring to herself as 'the greenest rider there'. (Very hard to believe, by the way!)
So without even giving it a thought, we haul her out there again, this time bareback on that wild mustang, Ranger.  And how does she repay me?  After hearing of the plight of my camera on our trip (buried in the mud at the bottom of a creek), they present me with a super waterproof camera so I can continue photographic documentation for our blog.  What great people!

And just to prove to Rachel that she is not the only one I have picked on, today we just returned from visiting a friend out on the plains of Colorado, with the horses.  I met this friend eight years ago at a Mark Rashid clinic; she was the same age then that I am now.  We hit it off right from the start, maybe because we were the two oldest ones there - by quite a ways!  At the time, I remember marveling how wonderful it was to see someone that gung ho about striving to better her horsemanship - and I thought she was much closer to my age!  Now that I am that age, I don't marvel at it anymore; I just consider it normal activity.

Six years ago, we invited C. to come ride with us when we brought the horses home from winter pasture.  She met us at the lodge to spend the night, arriving shortly before we did.  She was surprised to see all three horses 'stuffed' into a two horse trailer.  We unloaded them into their corral, then had a fun evening together.  We awoke to a blustery, windy day determined to ride.  To make matters worse, I put her on Washoe, a four year old at the time - still sort of green, but she was an experienced rider.  Right?  I found out later, I was the one determined to ride, as she does NOT like to ride in wind.  She went along so as not to disappoint me.  To make matters worse, we find out she is afraid of heights.  Duh!  We have just made her ride up a cliff face ... and back down it!  She blanched when she found out how old Washoe was, er, wasn't.

Today, I had to marvel at her again.  She has a young-er horse that she desperately wants to ride.  She purchased him four years ago, at the age of four.  He had only had four rides on him at that time (a lot of fours here) and she saw lots of holes in his ground work, so she started working on that.  Since then, she has had a lot of personal misfortunes - and with her other horses - and has not been able to ride.  Now she is determined to get back to riding, so we hauled our horses down to see if we could be of any help.  Bill did get on her horse bareback, to make sure he wasn't going to buck or bolt.  She's done a great job with him and he took it in stride.

Oh, and Rachel, we got some great pictures and movies with the new camera, plus we found out C. is sending us some waterproof camera covers.  Bill will never live down losing my camera in the creek!

Thanks so much,
Bionic Cowgirl
Posted by Allenspark Lodge at 11:38 PM 4 comments: