"Alright.  Which one of you guys tore the fence apart again . . . Jesse?"  The fence gets 'dismantled' a lot, right where the feeder hooks on to it.  Jesse is notorious for destroying the cross buck pieces when she gets bored from being in the pen; not getting to work.  She hasn't been worked much at all this year as we are trying to get her back and hip healed.  Apparently her back is too long to carry weight well, so carrying me around for long days for the last 12.5 years has taken its toll on her lower lumbar region and she has developed arthritis in her left hip, to the point of making her lame on that side.  It was very noticeable when we brought them up from winter pasture last spring and we have spent the summer with massage, anti-inflamatories, and supposed rest.  Well, now she feels better and nothing is safe.  One of our vets said I might be able to work her up to 2 - 3 hr. rides 'now-and-then', but no more of the tough six hour rides we like to get to our mountain lakes.

Alas, I digress.  All this to explain why I would blame my mare for further destruction. I put boards back as best I could in the dark and tied their slow feed hay net to the feeder.  Then I climbed inside the pen to tie the other end and the horses went crazy.  Even Ranger - the old man - demonstrated his famous all four feet in the air bucking style.  They jumped, kicked, bucked and ran around like fools; not their normal feeding frenzy at all.  They finally quit and came up to me to get fed, but were still quite hyper.  I put it down to being cool out and dark.

Fast forward to bedtime.  Bill goes out each night to check the cars (bears, you know) just before locking the front door for the night.  He came back in and asked if I had seen the moose when it walked across our parking lot.  What moose?  The one that left the huge tracks in the sand just behind the cars.  There were no moose tracks there when I had crossed to feed the horses a couple hours earlier, but the tracks he showed me were definitely moose. 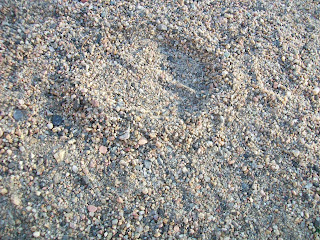 Bill then suggested that maybe it was not my mare, but a moose who broke up the fence, trying to get at the horses' hay - and they were just telling me the story of all the excitement.  That makes a much better story, don't you think?

Attack of the Killer Carrots

B-  Here you go buddy, have a carrot.

B-  Now Ranger, you love carrots.  Take this.

B-  Carrots do not bite.  They are tasty vegetables.  Not prone to attacking horses.

B-  Ranger, our guest told me what happened.  She said she was trying to give you a carrot and you were standing in the mud, leaning against the metal feeder.  And she bumped the hot-wire.  And you got a shock when you touched the carrot.  It WASN'T the carrot biting you!

B-  Juanita says you will take one from her sometimes, and then think better of it and back away and not take any more.

B-  Juanita says you will take them from her if she goes into the pen with you. 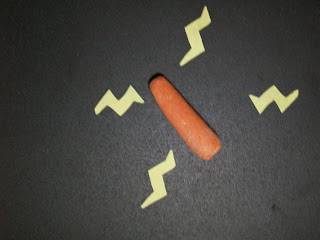 Many sun-ups ago Beel and Waneeta wented and telled us the horses that we gotted a job to do.  We needed to teach some other horses how to walk outside.  This sounded strange to me.  Maybe the others were crazy like dogs and only ran outside.

B-  Now Ranger, it was only about 3 days ago, and we told you our daughter and her husband's horses had never been ridden in the mountains and we needed you guys to help them get over any fear out on the trails.  So we needed to introduce our herds to each other so we could ride together in the mountains later this fall.

Beel I am saying this story.   Not you.

Beel and Waneeta putted all us the horses in the rolling shed behind the stinky truck and  we wented to a different horse place.

B-  That was really amazing watching you, at about 30 years old, chase that  young mare around.  You were running backwards faster than I can run forward.  And kicking to boot!

Beel it would be better if you were quiet.

Then it was time to put That Mare in with the new herd.

B-  Yeah.  Jesse is the lead mare in our herd and she wasn't about to take any guff from

That Other Mare telled them all she was boss mare.  Again and again. A lot of times.  Then they sayed yes.

Then the kid wented in.  Most times The Kid is not smart and makes fights with everyhorse that is new.  This time he just breathed their air and walked away.  He did not fight them.  They did not fight him.  I think the new horses were tired of getting kicked on. 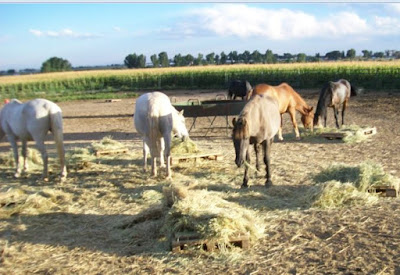 One of the new horses scratched each other with That Mare.  I think he liked her.  He cried when we leaved at a later. 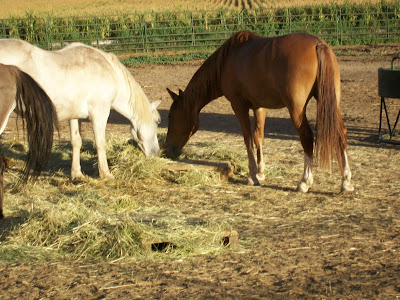 We getted back into the rolling shed and wented home.

B-  All  three of the horses in our daughters and her husbands herd were missing some patches of hair, or had dents from being kicked.  Not bad mind you, but every one of them.  There wasn't a mark on our herd.  I think you guys are better fighters.  Or just mean.  Herd merging should be much less exciting  next time.  The hierarchy has been set.  Trail rides are eminent!

You were very wrong Beel.  The other horses walked just fine outside.  They only runned when chasing was happening.

The chicken birds there did not walk to good though.