Some people have dogs that will DESTROY a squeeky toy in a matter of hours.
Those people are so very lucky.

Reba, our lodge dog in training will take a squeeky toy in mouth and squeek it for hours at a time.  At least it seems that way.  Some toys are forbidden when we have guests in the lodge, and there are a couple of them that will never, and I mean never be allowed in the car with us.  Never ever.

But other than that, she is settling in nicely as a lodge dog.  She is greeting people at the door and graciously excepting scratches and pets from our guests.

We hope to be able to introduce her to our horses next week.

Last weekend, GunDiva honored Autobot and myself with tickets to a horse vaulting event.  Autobot's mom and I both thought that was a fancy name for trick riding - and was quite concerned about the future welfare of her oldest daughter's horse desires.  Not so.  Horse vaulting - as it was explained to us - is a combination of dance and gymnastics on top of a horse.  For this, large broad-backed horses are chosen.  For this event the four horses were a 18.3h Belgian, a 17h Belgian/Quarter horse cross, a 18.1h Percheron and for the smaller vaulters, a 13.2h. Halflinger ... and this is what they do with them ... 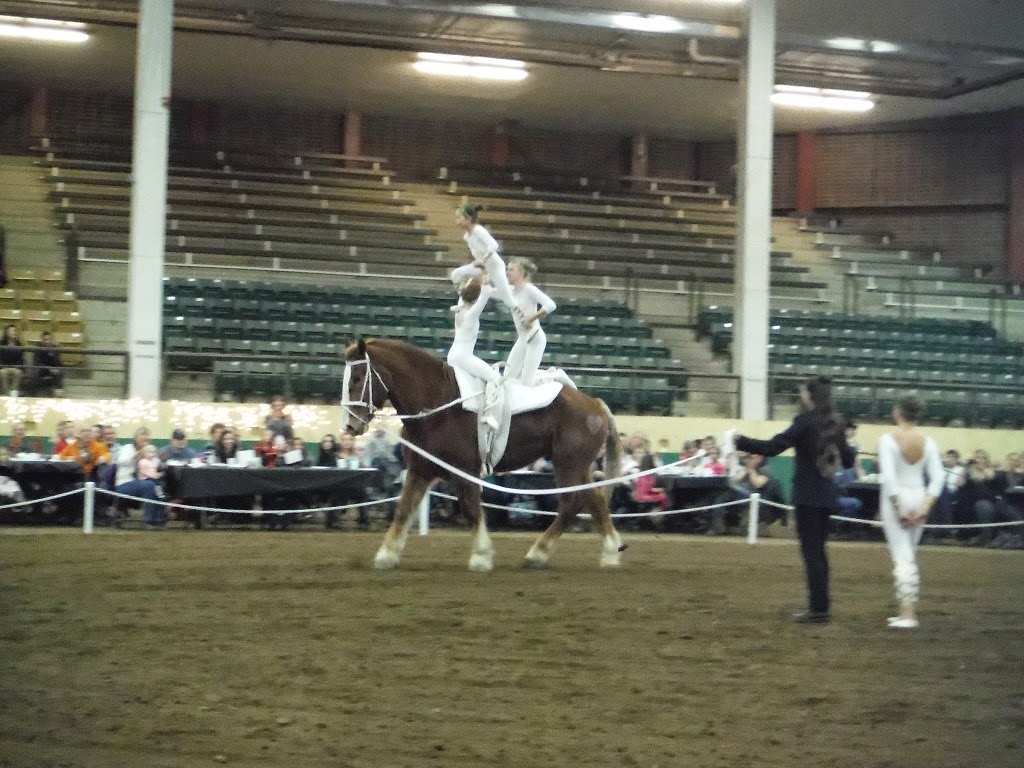 The horses are so patient, and some of the vaulters are so small ... 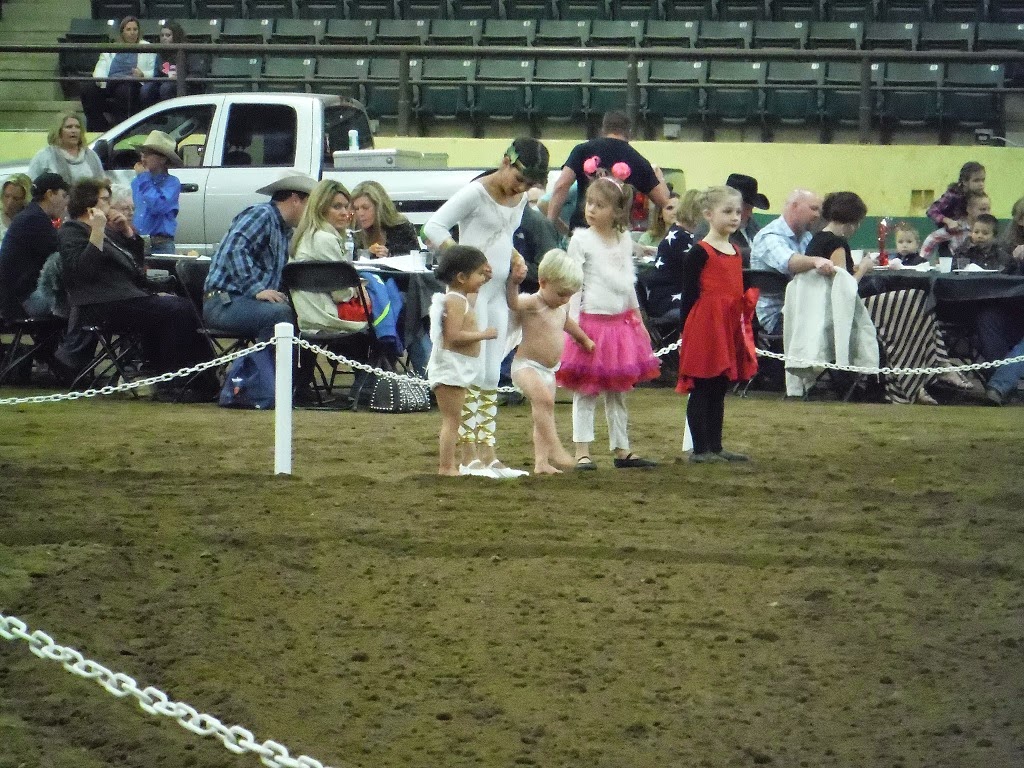 They get started pretty young.  Yes, those two little 'angels' performed some pretty cute stunts.  There were ballerinas, a bumblebee, angels, lots of flowers .... and each performed to a favorite song ... some with some amazing ballet moves.

We also had dinner included, plus a silent auction and a live auction.  GunDiva came home with two buckets of horse treats and I ended up with another, so our horses ought to really enjoy this summer.

On the home front, Reba the new lodge dog is starting to show her true colors; the personality is really coming through. 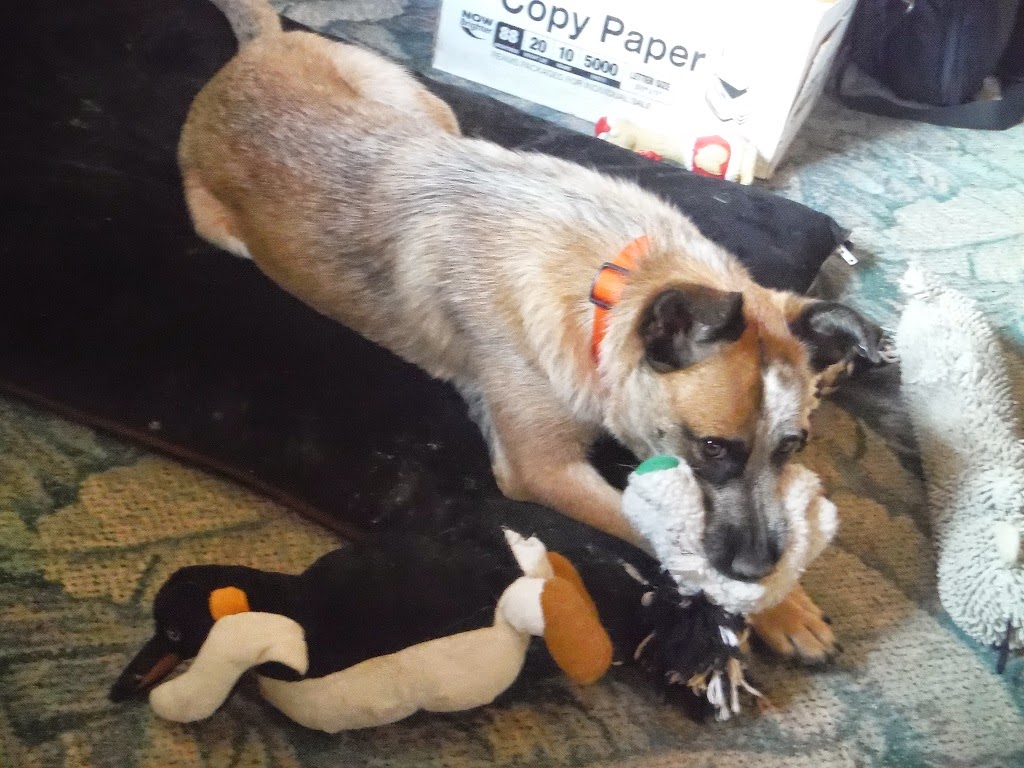 She can take the multitude of squeaky toys she inherited and turn them into a half hour concert!  She has also learned how to play 'pull' with the rope - and .... it takes a considerable amount of time to play her out fetching things!  On the good side, when she does get tired, she takes really good naps.  She also does a great job entertaining herself with the toys.  Her guest manners are coming along nicely.  She had a lot of practice this weekend with the Valentine's Day guests.  I guess we will keep her.

We have a new family member!  I hadn't realized what a funk we had gotten in since losing Sophie (the Lodge dog) last November.  We continued on with life-as-normal (as much as possible) - or so we thought.  Lots of comments along this time about needing a dog; the place just didn't seem right.  So about three weeks ago, we started the "looking" process.  We had made a list of specifics, of course:
1) must be 'user friendly' to guests; 2) younger so as to last longer; 3) mid-size, in the 50# range when full grown so as to be good outside; 4) enough hair to tolerate cold without having to 'put on a coat' every time it needed to go outside - 'cause we have more cold weather than warm up here; 5) Bill prefers female dogs, but not a necessity (he says females "pee all at once"); and last but not least  6) couldn't look too pit-bullish.  NO, we have nothing against pit bull and crosses; even have one in the family that is a great dog.  However, many guests can be cautious of dogs anyway, but way more so when they have 'the look'.

Last week, we visited the Humane Society in a local town and found a 'good' dog.  As we took her to the adoption desk, a man walked in with two grade school age girls and looked shocked to see us with the dog.  Turned out he had been in earlier with a younger child, loved the dog and went home to get the other kids to see what they thought.  He had failed to put a 'hold' on the dog, so they let us take her out for a time.  After hearing the story we opted to let them have the dog, believing that there are too many animals that need homes to argue over this one.  We believed there would be another dog we would like.

A couple days ago, Bill spotted one on the Society's website that he took an interest in:  a lab/boxer cross named Truffles (of all things).  No picture yet as she was still being processed.  Today was our first chance to go take a look.  It turned out she looked like full-blooded pit bull.  How that happened with that mixture, I don't know, but another family was interested in her also (turned out she did get adopted today also).  As we looked at the rest of the dogs, I noticed a cute little thing sitting and watching us very quietly as we walked along the cages - just like Sophie had done!  I kept going back to her so we took her out for a walk and took to her very quickly.  She was smaller than anticipated, but not so small as to be a deal breaker, so meet Reba. 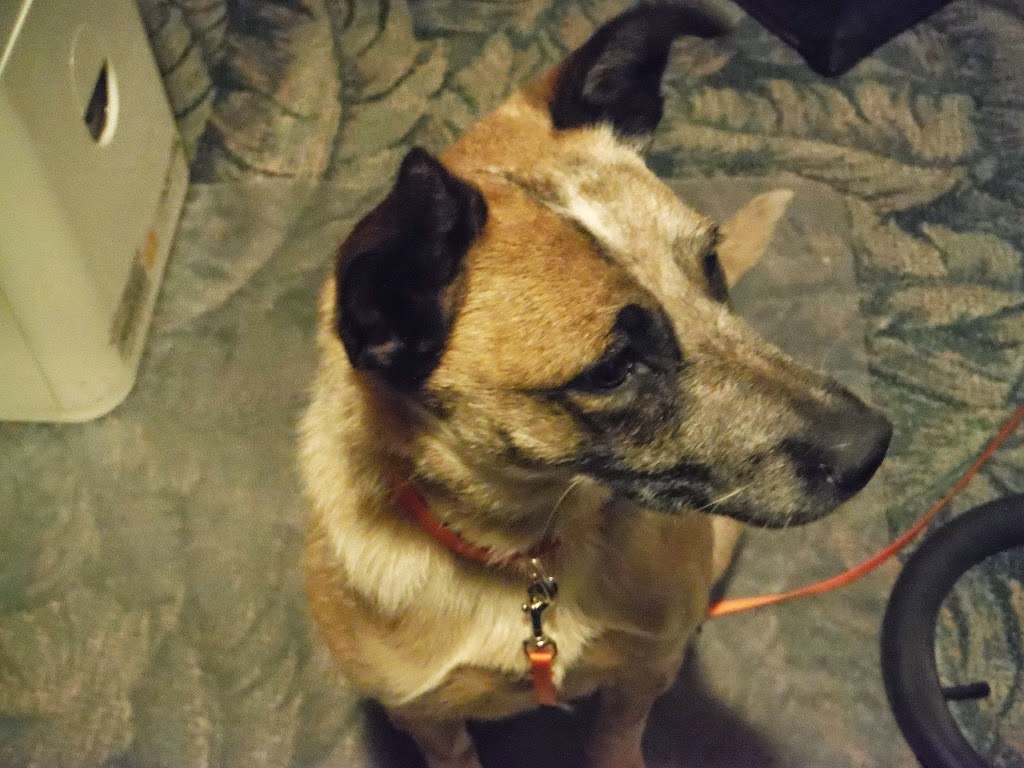 They called her Della, but as I was reading the relinquish report on her, I found she had only been at the previous home for a little over two months and was given up for being 'too energetic'.  Her name prior to that was Reba and she answers very well to that name, which I definitely like better. 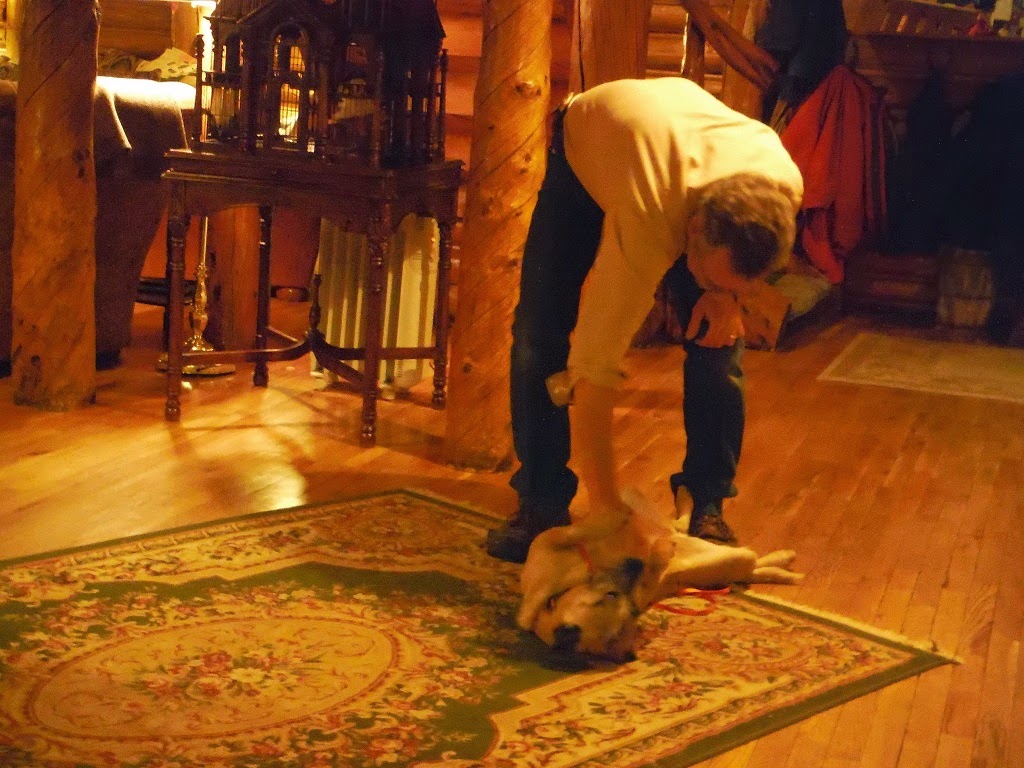 Obviously, she can handle Bill's 'rough treatment'; those belly rubs are pretty OK! 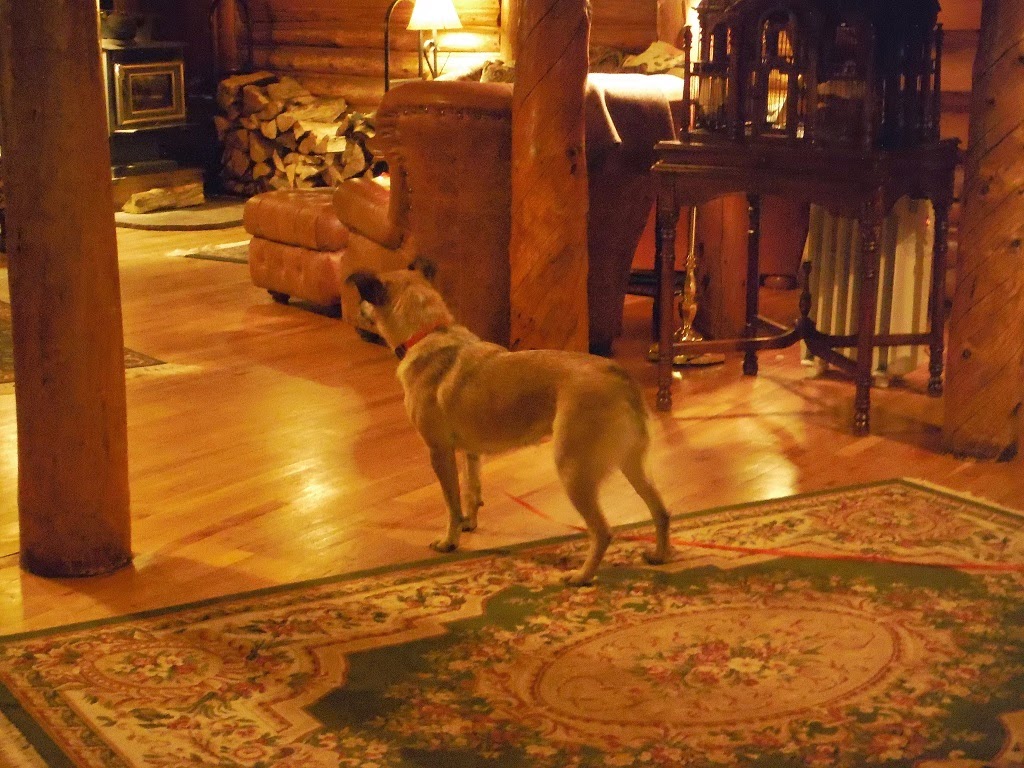 Right now she weighs in a tad over 33 pounds, is about 4.5 hands high at the withers.  She is a little over two years old and seems to have had some good training, although maybe she had some rough handling early in her life because things raised over her head tend to make her cower.  She is a 'cattle-dog/cross' and said to be good with livestock.  We will learn about that when the horses come home.  I do know her tail wags so fast you can't see it in the above picture!   So far, she is way more than expected and fitting in well.  Time will tell.  Stay tuned.....

We have been HORRIBLE about posting on the blog lately.

At some point, you gotta just do it.  Sadly, it ain't gunna get the time it should, 'cause I'd just put it off if it was going to take too long.

We went to the first week of the National Finals Rodeo in Vegas for the first time in several years.  Fun was had by all.  We will need too do it again sometime.

We celebrated Christmas.  Most of the family made it up to the lodge.  Fun was had by all.  We need to do it again sometime.

We went to help our daughter and son-in-law work with their mustangs.  Fun was had by all.  We need to do it again sometime.

We went to visit our horses who are loose on pasture outside Lyons Colorado.  Fun was had by all.  We need to do it again sometime.

We went to watch PBR bull riding at the National Western Stock Show.  Fun was had by all.  We need to do it again sometime.

We went to the "Big Thunder"draft horse show and watched the 6 and 8 horse hitches.  Fun was had by all.  We need to do it again sometime.

We went to the draft horse pull finals and 8 horse hitches show at the National Western Stock Show.  Fun was had by all.  We need to do it again sometime.

Tonight I wrote a catch-up blog.

I need to do it again sometime.