I have not posted in a while.  My bad.  It's been a busy summer and Juanita and I have been running non-stop.

August hit and I realized it is about to start snowing again, and guests or not, I better get with the program.

During the preceding seven months, I would do some work with Alloy, but none consistently.  Alloy reverted to his old ways.  Again, my bad.

When Alloy was first taken in by his first trainer, Jessica, he had a bucking problem.  The problem was he was GOOD at bucking.  Jessica sent him to trainer #2.  Al seemed to get over his problem and was sent back to Jessica.  Jessica worked extensively with Al, and he showed the makings of a great trail horse.

On to owner number two.  For whatever reasons, Alloy started bucking again.  Was sent to the next trainer.  Still bucking.

I picked him up.  He got extensive time off, but when worked this summer, he still bucked on occasion.  Often enough I was... worried.  My previous mustang, Ranger, dumped me, oh, I don't know... probably twenty times.  No damn fun.  And I am about eighteen years older now, and not interested in doing that any more.

Fortunately, Al didn't buck while I was on him.  He was bucking just after saddling, or right after I dismounted.  And boy can that fodder-mucker BUCK!  One time he ran into the road bucking so hard the stirrups clapped together above his back and one of them broke. 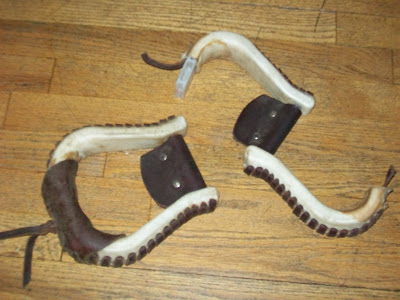 One of the things we noticed about Al, was he seemed to get bitten by bugs a lot.  He would have large welts.  So we would spray him with fly spray.  Still welts.  More spray, even more welts.  Finally Juanita said "That looks more like hives than bug bites!"

Poop.  I think the guy is allergic to the spray we use.  We quit using it, and the "bites" went away.

Every time that jerk would start bucking I would run up to his face, latch onto the lead rope or reins, and scream "NO!  NO!  NO!" like some sort of lunatic at him.  He would get kind of bug-eyed and freeze, as I was obviously unstable and a danger to all.  Then I would rub his neck and tell him what a good boy he was.  I've been doing this of the last 3 weeks or so now, and the episodes are getting more rare, and not as violent or prolonged.

And I have been able to mount and ride him with a certain amount of confidence. Probably 6 or 8 rides at this point.  Increasing in time from just a couple minutes in the corral, until today when we went for a real, honest to goodness trail ride.  We spent an hour and a half in the forest.

Today I saddled Al up, and he threw a minor bucking fit while he was tied to the hitch rail.  I waded in and grabbed his halter and yelled "NO!NO!NO!" at him and he stopped bucking.  And went into a full angry sulk.  Like a 12 year old boy who got in trouble.  Tight lipped, squinty eyed, pinched nostril pout.  No eye contact and staring off in the distance even when I told him he was a good boy for ending his fit. 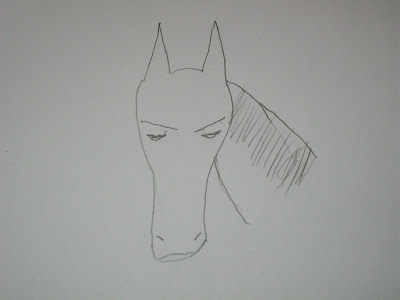 It was really kind of funny.

In a couple minutes he got over it.  His eyes got soft again and he focused on me. We mounted up and spent an hour and a half on the trails on the nearby national forest with Juanita and Washoe. 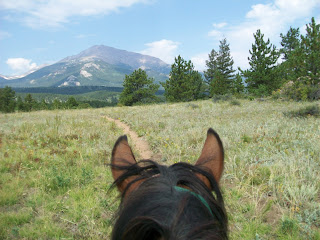 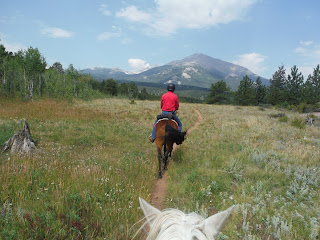 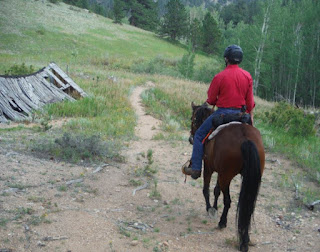 I wore red to make my body easier to find. 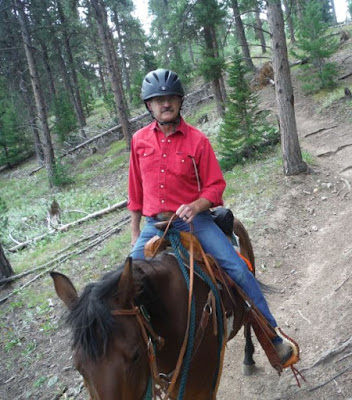 Alloy was a very good horse today, And little by little we are building up trust in one another and are enjoying each others company.

Some day I can lose the "chicken hat".  But not yet.