I hear Bill muttering in the office; when I ask what's wrong he says, "We are under a winter storm warning for the next two days. 1 - 3 feet expected."  This time they were right.  Raining when we went to bed Wed. night; 14" on the ground in the morning - and not stopping. 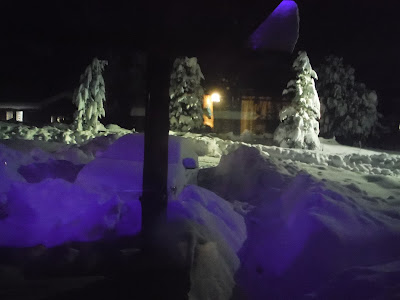 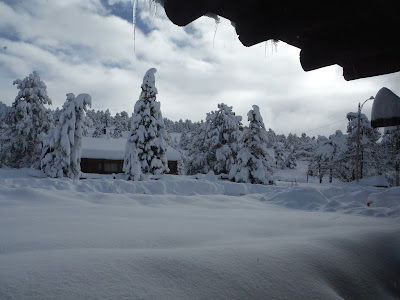 Finally (Friday) this morning the sun comes out and we have a count of 36".  Wonderful spring storms.  Gotta love 'em!
The horses keep the corral stomped into baths, so all we have to do is shovel our way TO the corral, because you don't walk too far in thigh-deep snow. 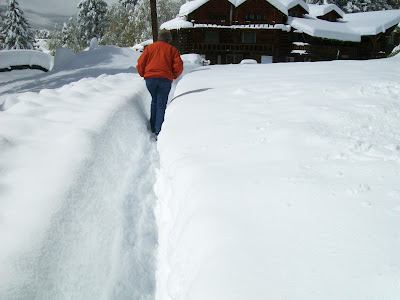 We shoveled last night to get extra hay to the horses, and had an additional 6" in the track this morning.  The biggest problem we have found using our slow feed feeders is that they get packed with snow when it comes down this heavy and the horses can't paw the snow off to get to the hay, so when we went to feed this morning, the feeders themselves were still full after the snow melted off. 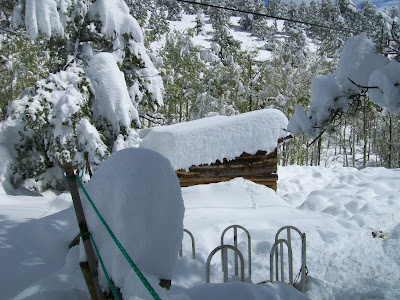 This is the horse's shed, which a couple of them actually used part of the night.  The horses themselves..... 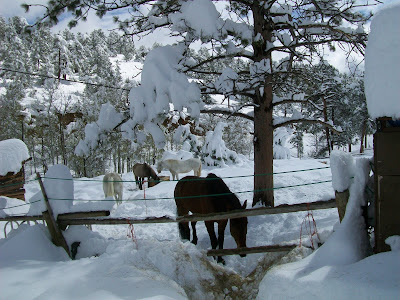 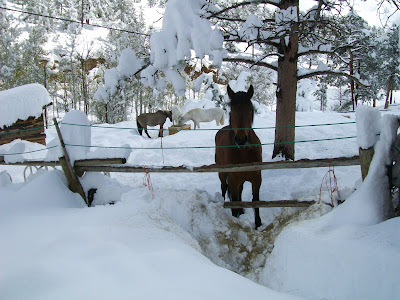 ....were happy to have their feed boxes back - except for Al, who has become quite the camera mooch.
Bionic Cowgirl
Posted by Allenspark Lodge at 11:54 AM 1 comment:

Early this afternoon, I spent over an hour changing both radiator hoses on the mini-van.  (The top hose had blown out about a mile from home last night.)

Later this afternoon, I spent over an hour driving the tractor around the horse pen, heaping up the manure.

And then later today, I spent less than 5 minutes on Alloy.

There were llamas going down the road. 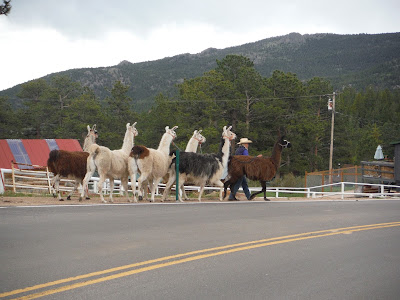 Alloy saw them.  There was snorting involved. 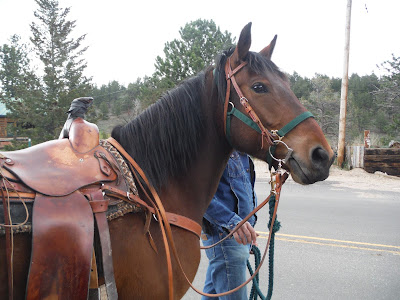 I climbed on anyway.


The horse time kept the whole day from being a total waste.

One of the most feared occurrences in a horse owner’s life.  You look out the window and see your horse in “that stance”; the one that signifies the lame foot you noticed two days before is really laminitis.

Jesse, the horse known for stomping things, as in rearing up and stomping down in a mud hole to splash herself and other horses.  Sometimes there are sharp objects and you end up with an abscess.  Gone for three days to a farm show.  Upon return, find lame horse on right front.  Check for punctures, stone bruises, abscess.  Nothing.  Next day looks like maybe a strained shoulder muscle.  Ok, a couple day’s rest.  Then you look out and see the awkward stance.  Yikes.

Call the vet, the wonderful man who always comes immediately when we call.  She gets put on heavy doses of Bute and penned separately until we can figure things out.  He says call the farrier.  Your horse has foundered.

Jesse has always been a bit on the chunky side; even as a very young horse.  She has also been very active.  She was the horse who could go day after day without tiring, do heavy work and not care.  Always wanted to be going.  The last few years (5-6) we have fought the weight battle, going to a slow-feed hay system and purchasing special low-carb hay.  This winter was the ‘killer’ so to speak.  Instead of turning them loose for six months on many acres to roam, we kept them home so we could introduce a new horse.  It was a particularly snowy, nasty winter, so not much in the way of good exercise. Starting in Feb., I put Jesse on a diet; 20 lbs. of hay in a slow feed hay bag and nothing else.  She had weighed in at 1130 lbs. at 14.1 hands, but she has some draft in her which is very evident in her build.

Wonderful vet called back in a couple days to say he had been thinking about the circumstances and Jesse’s build, etc. and said he wanted to try some thyroid meds with her.  He thought she had EMS (Equine Metabolic Syndrome) or the same as type 2 diabetes in humans.  Too much insulin her body just couldn’t use.  Worked.  She started dropping weight.  In the meantime, our also very wonderful farrier put wooden clogs on her feet.  As soon as the clogs went on, she was able to move again.
Both vet and farrier said she needed to be walked 15 minutes twice a day, and kept in a smaller pen.
She’s been in clogs 5 weeks now.  We have walked in snow, sleet, rain, and finally, sun – missing only twice in that time.  Once due to ice packing up too quickly on the clogs, and once because Jesse just didn’t feel like it.  (The farrier had said let her make the decision on how far.)  At first, we did well going around one city block.  Improvements came fairly rapidly.  Soon she was walking faster, so the faster you walk the farther you get in your 15 minutes.
I started by taking another horse along with us for company in the mornings and so another one could get a bit of exercise.  At night, it was just Jesse and me.  What a struggle at first – she has never liked leaving the herd and even just one block was pushing it – but we prevailed and she now looks forward to the walks as much as I do.

Bill was gone for two and a half weeks of this time.  Soon neighbors showed up to help until the mornings entailed all four horses going for the walk, with different neighbors leading them.  Super way to welcome the spring weather in the mountains.

Jesse is now at an almost svelte 990 lbs. since her diet started exactly three months ago.  Getting quite toned up and marching along faster than I can keep up.  We vary the route every day, zig-zagging around blocks but getting in at least a half mile.  We have developed a great habit.  One more week of clogs, but they are an amazing improvement in laminitis treatment.  Check out this website for information:http://www.thehorse.com/articles/26368/clogs-to-treat-laminitis

Next?  Start ponying her for longer times.  She seems to have stabilized at that weight.  She still gets an anti-inflammatory med for her arthritis but she is looking good and her great attitude is back.  She still has a way to go to get the feet healed, but we are headed in the right direction.  She turned 16 this year and I am anxious to keep her around for many more.

Bionic Cowgirl
Posted by Allenspark Lodge at 11:45 AM 7 comments:

Three of the last four weekends of April I was out of town.

April 7th my niece got married down in New Mexico, so I drove down to attend the wedding.  In true Martin style, it was a court house affair followed by a picnic a couple hours away in the mountains.  I had fun.  Juanita and our youngest daughter and her kids stayed and worked taking care of a group that had rented the whole lodge. 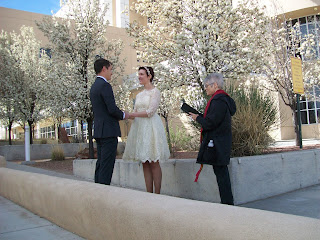 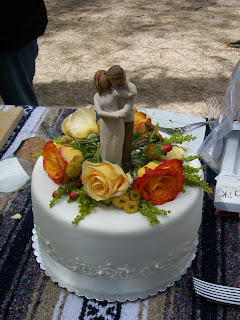 In March I had gotten a call that one of my closest friends had been diagnosed with stage 4 cancer and was not going to be able to take his guests on a tour of the Monument Valley Navajo Tribal Park.  He had 2 different 6 day tours scheduled and needed me to fill in for him, so from April 19th to May 5th I was in Arizona/Utah working with the local Navajo guides taking about a dozen people through some of the most striking real estate in North America.  I had fun.  Juanita and our youngest daughter and her kids stayed and worked taking care of several more groups that had rented the whole lodge. 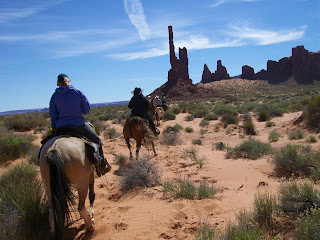 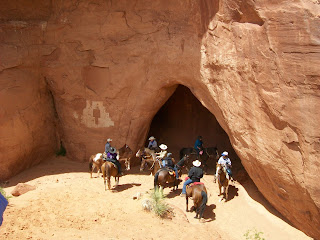 I'm pretty sure I should be feeling really guilty about now.