Last Thursday (1/14) we moved our horses from one winter pasture to another; quite uneventful as things go.  The horses came when called, were easy to catch and two loaded nicely into the trailer.  Since we had four horses to move and a 3-horse trailer, we opted to move in pairs, so while Bill and Compass took her horse, Henry, and Washoe to the new/old location I stayed behind with Ranger and Jesse.  It was a great sunny, warm day, albeit windy, and it gave me time to continue working on getting burrs out of Jesse's mane.  We would have gotten them all out, too, if Bill wasn't such a fast driver (teasing).  He did get back in half the time I had expected.  We loaded the last two on and headed to one of their normal winter hangouts.

Now we had been assured that all the fencing had been checked and was intact, but that possibly one section was not yet 'hot'.  It wasn't much of a worry since our horses knew that pasture, it was big - going from 7 acres to 20 acres - and there was no reason for them to stray.  There was a heavy layer of snow on most of it, but our guys are good at digging, so we left them.

On Saturday, we planned on going to Big Thunder, the draft horse show held at one of the local fairgrounds.  Most of the competitive large horse teams use this event to get their horses acclimated  and ready for the draft horse section of the National Western Stock Show in Denver.  On the way, we stopped to check on our herd and make sure we didn't need to supplement them with hay.

OK, they seemed like they were farther away than they should have been, so we drove to the end of the road, and sure enough, they were at the far end of the NEXT pasture..  We parked and started walking fence lines.  There's the break ... wait, there's a large section that was apparently used as a gate for large equipment, and not re-closed.  Can't fault the horses for deciding the next pasture was more pleasant looking.  After all, it had a huge patch of uncovered grass under some very large trees.

We walked most of the way across, in fairly deep snow, until we could get their attention.  True to form, my grays came the rest of the way to us, and the two other geldings saw the halters and decided "no way".  We slipped halters on Jess and Washoe and walked them back toward the gate, in hopes the other two would eventually follow.  For once, it actually did work (not a given for Ranger!)  Henry didn't want to miss out on whatever, and Ranger finally decided he didn't want to be left out and came straggling in.  We were patting ourselves on our backs about our luck; might actually get to go to Big Thunder.  You all know what happens when you do that.....

Bill fastened the gate - merely a single barb wire strand, as was the rest of that section of fence - and I released my horses.  To my surprise, Jesse took off at a dead run right for that section, ducked her head and peeled under the 'gate'!  Be careful what you teach your horses.  I had taught mine a 'duck' command to duck under things on the trail.  Last summer, unwittingly, Bill and I had both used that a lot to move the horses from one pen to another or to get out of our corral without having to unhook the hot wire every time or remove the top gate rail.  In our minds (besides being lazy), we were just reinforcing a verbal command.  In Jesse's horse mind, it meant she could move to the pasture she thought better on her own.

While Bill kept the other three from following her, I tramped back into that pasture intent on catching a horse who now did NOT want to be caught.  It quickly became clear she just wanted me to understand which pasture was better.  As soon as I called her, she returned to the fence line but instead of crossing in, she raced as fast as she could all the way to the other end.  When I called again, she came racing back, passed me and continued to the other end.  Now she was just having fun getting some much needed exercise.  This was a game we would play when she got bored if we had to keep them on the mountain in the winter.  So I just stood there and called again; again she raced past me to the farther end.  I had to laugh; she looked so like the big drafts when they go flying by in the arena, so I called her Little Thunder.

This time I just followed to the corner where she calmly waited for me.  I started to reach for her halter, but she just walked over to the fence and started to step over the wire.  When her leg touched the wire, she just put her foot down and stood there.  I realized then that the fence in that spot was barely 8 inches above the snow, so I stepped on the wire and told her to step over, which she nicely did.  I raised the wire back up to the height it should have been, gave all the horses a good pat since they had wandered down to watch the escapades, and headed back across the pastures.

Bill had secured the gate better and decided to halter Ranger to make him walk back to the proper end in hopes all would follow.  We decided to feed them a bale of hay so they would have something they didn't have to dig for.  Of course, this time the others would not follow, so Ranger got the whole bale to himself, which he promptly scoffed at and returned to the others.  Go figure.

We climbed in the truck and continued on to the fairgrounds, arriving just in time for the main events.  It's always glorious to see those huge teams in action.
The big yellow wagon won the 6-up - with all mare Percherons.  Second place was also an all mare team of Percherons - only 3 years old!  Go girls!

Nothing like traipsing around in deep snow in your dress boots to get your exercise!
Bionic Cowgirl

R-  What do you need to get away from Beel?

R-  It works good if you run away from things you need to get away from.

B-  I'm not sure that would be the right way to handle...

R-  Or kick them.  That works really good.

B-   I'm SURE that would be the wrong  way to handle our guests.  But we are here now.  Last time we dropped by we noticed that you guys had picked up a bunch of burrs in your manes and forelocks.  You look like "Alfalfa" and Jesse looks like "Trump". 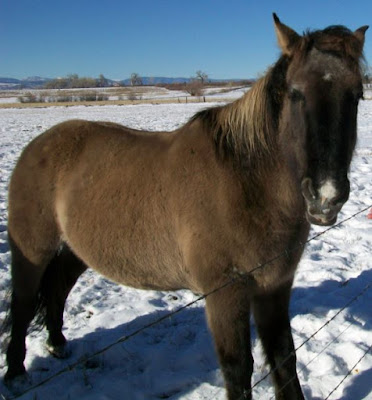 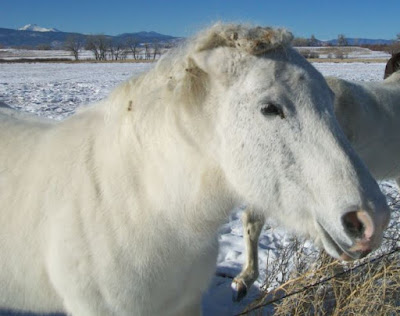 R-  Alfalfa is good.  And tromping is another good way to get away from things that bother you.

B-  Aww, come on buddy!  Stop walking away.  I'm just going to brush your hair.

R-  Nope.  When you put my head rope on my head you climb on my back and you are fat.

B-  I'm not fat, and I'm not even going to climb on you today.  I just want to brush your hair.

B-  Look, Jesse, Washoe and Henry are all in the holding pen waiting nicely, and I'm out here walking in circles...

R-  Walking is good for you.  It will make you less fat.

B-  Oh, right.  you just let Juanita walk up to you and put her arms around your neck.

R-  Walking is also a good way to get away Beel.