B-  Hi horses!  Washoe, Jesse, Ranger and Alloy-  how are you guys doing today now that I have scraped the first layer of manure off and into a big pile?  I got down to a layer of ice and the tractor lost traction.  Must have reached the "perma-frost".  Or an old forgotten glacier.

B-  Gee whiz, Ranger.  I was just messing with the new guy.

R-  No Beel.  You are my people and you should only mess with me the horse.

B-  Okay then, it's a beautiful day and it's almost 70 degrees out.  How about we take Alloy out for a drag?

B-  Juanita can take Washoe, and we'll pony Al.  Jesse will have to stay here.  She "foundered" this week, and is under doctor's care until her feet start feeling better.

R-  That Mare will not be happy.  She will yell for us.

B-  Man-oh-man!  It is so pretty up here.  We haven't been able to ride this trail for 5 months or so.  Look at this- someone is getting ready to build a house up here next to the National Forest.  Juanita, let's leave the trail and see if we can spot where they are going to build.  I don't think we have ever ridden right along here...

B-  Alloy, what in the world is wrong with you.  You are supposed to just follow along when we are ponying you, and you just stopped cold and almost drug me out of the saddle...

J-  Bill, Alloy is standing in a coil of barbed wire!

B-  Okay Alloy.  I am impressed.  You have a very good mind.  That could have been a DISASTER, but you just worked your way through it and didn't even get a scratch.  You are one smart horse.

R-  I do not think a smart horse would step in a big pile of biting wire Beel.  Al-loof is a goofball.

B- Alloy, what in the world is wrong with you.  You are supposed to just follow along when we are ponying you, and you just stopped cold and almost drug me out of the saddle AGAIN.

B-  Alloy, We are 10 feet outside of your corral.  That is the same stream you drink out of every day.  There are no monsters.  You crossed the stream 20 minutes ago with no problem.

B- You are going to make me get off of my horse and lead you across a ONE FOOT WIDE TRICKLE of water, aren't you.  Jerk.  You are a lot less smart than you were 10 minutes ago.

R- I think he is afraid of Al-e-gators Beel. 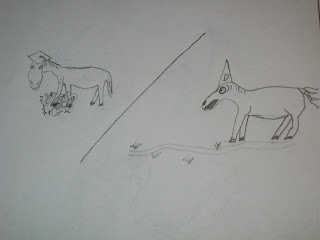 Email ThisBlogThis!Share to TwitterShare to FacebookShare to Pinterest
Labels: Alloy, R and B

Farm Days in La Junta, CO.  Friends of ours have been asking us to join them there for several years now.  If you want to see big teams – as in draft horses – work, it’s the place to be in the Spring.  I had an ulterior motive this year; I want to teach Jesse to drive and there would be a well-known harness maker and trainer there.  In fact, it’s at his farm site.  The idea of the weekend is to get his fields plowed and ready for planting – using horses instead of tractors.  He owns four well-trained gray drafts and there were going to be several other teams; everyone there to pull a plow or disc or whatever was needed.  I was promised huge information on all things to do with harnesses, driving, horses, and a great time.  I must say, the information part turned out to be overwhelming.

When we arrived on Friday, the teams were just coming in from the day’s work in the field.   We stood around in awe of the giant animals moving around us; some of every different breed; even a couple teams of mules; some matched; some mismatched; very large ones and a Halflinger team; one that appeared to be Mustangs.

Dinner was served cowboy style; outdoors on planks set up on props; a cook fire going outside as well as inside the bunkhouse.  We all pitched in somehow, whether helping to setup, cook, clean up afterwards.  The kids got put to work; nobody was left out.  And of course, afterwards, the music started with first one guitar/singer, then another adding in, and another.  You could just sit and listen to the wonderful old cowboy ballads or join in the singing.  Talk about days gone by! 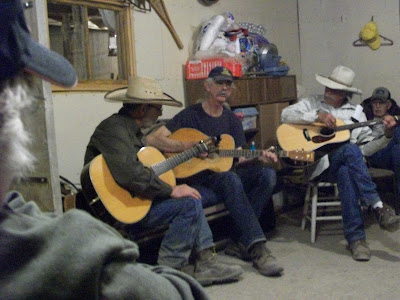 My big objective was to learn all I could about fitting and harnessing horses, before I actually bought tack for Jesse.  On Saturday the plan was to spend as much time as possible ‘shadowing’ the ones with the info.  Del is a local legend in the industry and was willing to take me under his wing.  It was like drinking from a firehose, following him around.  He had brought his horses in and tied them off on a trailer.  I was pointed to curry and told to get busy.  Lots of white hair flying and are these guys BIG?!  We took a break for breakfast and then the real work started.

Del was great about explaining how and why for all parts of the harness.  I watched him harness three of the horses, then was told, “Your turn.”  What?  OK, I got this.  Want to take a guess what all those straps weigh?  When you get the collar and the rest of the harness, you can have anywhere from 75 to 100 lbs., depending on how fancy you want to get.

The fun starts when you get to sit on the collar and bounce up and down to ‘round it back out’, since when you hang it up, it is wet and tends to elongate downward as it dries.  You have to get it back to a rounder shape to put over the horse’s head.  Some of this stuff is done differently than for the show horses.  Remember, these are work horses headed out into the fields, and they and their gear come back mighty sweaty and dusty.  Now you get to lift this (maybe 20 lb.) collar onto the horse by pushing it over their face – nose, eyes, ears – and settling it down just above the withers.  Not bad when you have a great horse who helps by sticking her nose in and pushing to get the ears through.
Next, get the rest of the harness settled on your arm and lift off the hook.  Much easier said than done, and then you get to settle this mass on your hip and kind of hitch yourself over to the horse.  Feels like it weighs about what my 50lb. saddle does, and most of the time I can get it slung over my horse.  But this is a totally different configuration, lots of straps hanging down to the ground, and by the way, the horse is 16 or 17+ hands (at least 8 inches taller than my mare in the real world).

I give it a good toss – and it goes nowhere near where it should.  Del says to squat down to the ground and give a big heave.  Right!  I try again and sort of get most of the straps up and part way over; Del comes to the rescue and helps me shove it the rest of the way.   Obviously, there is a practiced technique to this.   He shows me how to set the hames in the groove on the collar and bind them into place.  He isn’t any bigger than me so I have to laugh when he literally swings all his weight on the buckle to get it tight enough.  Then the buckling up starts, walking around the horse connecting straps as you go, pulling the breeching over the rump and getting the tail settled over the strap, and making sure everything is absolutely straight, so you don’t cause any sores.

Time for the bridle.  That head is a long way up there and these guys don’t figure it necessary to teach your horse to lower its head and be accommodating.  However, this mare was great about lowering her head when I asked, taking the bit like a lady and being patient because I had never handled blinders before, which are permanently attached to the bridle.

Now for the reins, all 25 ft. of them.  Sling them over the back and out onto the ground behind, then thread them through the proper spots and attach to the bit on the left side of the horse to be on the left.  Repeat on the right side of the horse to be on the right.  Now, to hook them together in the middle and learn how the reins work, so you as a driver only have two reins in your hands to signal two horses to do the same thing.

Then I got to watch Del move the team to the plow and get it hitched up, again getting instructions on the proper order of attaching the harness to the tongue of the plow.  By this time, I was beginning to feel like I had info overload, so I just watched the plowing for the rest of the morning!
Posted by Allenspark Lodge at 4:27 PM 2 comments: