The Queen is Back

First, this post was started yesterday (Memorial Day), and I want to say thank you to all our service personnel who have fought and died to protect the rights and freedoms we so often take for granted.  We owe them, and the loved ones they left behind a lot.

Yesterday, we had a family gathering, stuffed ourselves to the gills (and beyond), and then picked up Queen Estes from her summer quarters. 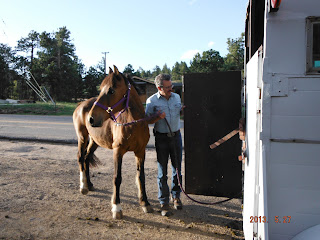 She took a quick look around, then gave a holler - and it got quite noisy from there out, with the others calling back to her. 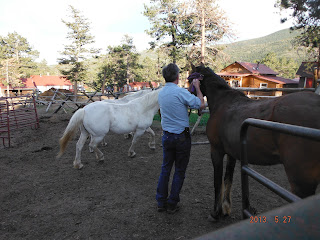 Bill put Estes in the pen and all heck broke loose.  Four horses racing and screaming obscenities at each other, until Jesse took a swipe at Bill with her hooves on the way by. 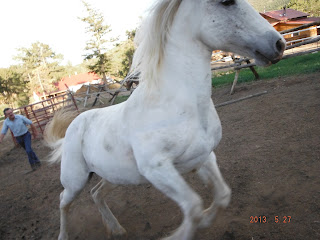 Then the race was really on and I couldn't quit laughing (not at my horse kicking out, but at Bill's reaction).  He threw Estes' halter at her, picked up anything loose on the ground to throw and was chasing Jesse around and around the pen.  He was so peeved that she would do that ... and I didn't really want to tell him that she was having a great time leading him on a merry chase.  Ranger kept charging in and snorting, playing wild boy, Estes stood off to the side and watched, and poor Washoe hid in the corner with me.  It was quite a chase, until Bill ran out of energy - or air - and stopped - and everyone calmed down.  Whew - I was exhausted just from watching!! 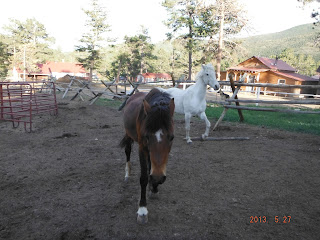 They settled in quietly after that; I guess they thought the carnival was over.

I was out doing morning feeding when the neighbor hollered over, "Wanna go for a short ride with us?"

"Would love to, but my guys haven't eaten yet.  Thanks."

We headed out a few minutes later, trailing behind Compass, a family of three, and one of the regular summer leases, making us 6th in line.  Since these rides generally go much slower than our 'normal' riding speed, it was a super way to check out the little lady.  She stretched out nicely and obviously enjoyed sauntering around the meadow.  By the time we were on the way back, she had worked out all her arthritic kinks and was wanting to 'push' the poor new horse in front of us.  The livery has several 'new-to-them' horses this year, so we will probably do more of these conditioning rides, to get them up-to-par for the season.  It takes a lot to get horses used to this altitude and the tough trails, so they will be safe for 'anyone' to ride.  By this time, Queen Estes had made some new rider friends (she's so cute; she's so delicate looking - but feisty) who could describe her to a T.  It was a good start for the summer season.
Bionic Cowgirl
Posted by Allenspark Lodge at 4:59 PM